Much of the food supply in Europe depends on immigrant labour. Workers who are not always rewarded with fair pay or fair treatment – occassionally treated as slaves. In order to improve the condition of such workers, the regulatory framework in the EU must be changed, and consumers will have to understand that cheap food has a high price. These were the conclusions from a mini-conference on “Agriculture and Immigration”, held at the recent Terra Madre event in Italy on October 25-29th. 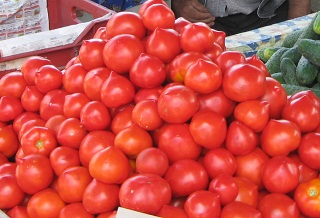 At the conference, Yvan Saignet, a student from Cameroon presented his experiences as a worker at a tomato plant in Sicily: “As a student in Turin, I have become an adoptee of the city”, he said. “But in Sicily I was looked upon as just another illegal immigrant working in the tomato plantations”.

According to Lorenzo Trucco, president of the Association for Legal Studies on Immigration in Italy, there are 500,000 immigrant workers in Sicily’s tomato plantations. The workers typically have a 16-hour working day. Since the plantation sites often are situated in areas without public transport or other facilities, it is the agencies who hire the workers that manage transportation to and from the plantations, as well as food and drink. This monopoly allows agencies to charge high prices for the workers – the price of a sandwich is typically 1.50 Euro and a bottle of water will cost the worker 50 Cents. The monthly salary for a tomato plantation worker is 200 Euros.

“The conditions of the labourers are horrible“, Yvan Saignet reported. “Many of the labourers are sick, but don’t get the proper medical attention”. The workers are afraid of getting in touch with the medical system, because they are considered illegal and could be deported by the authorities. “The result is that the labourers have to pay the agencies to take care of their contact with doctors – and in the end, what was supposed to be a way to earn money to their families back home, ends up being nothing else than mere slavery“, he concluded.

All over Europe, immigrant workers are working at farms. In Denmark, there has been an increase of employees on farms and plant nurseries from Lithuania and Romania. In 2008, a total of 29,757 workers from Eastern Europe were registered in Denmark – in 2012, there were 49,608. In the same period of time, the number of Lithuanian workers had increased by 139 % and the number of Romanian workers by 197 %, according to the Danish Labour Market Authority.

In Denmark, members of the farmers’ trade organisation, GLS-A, have made a mutual agreement with the workers’ union, 3F, to pay a farm workers a minimum wage of 19.75 Euros per hour. However, Danish media recently reported that wages are considerably lower for Eastern European workers, employed by farmers or plant nurseries who are not members of GLS-A.

For these workers, the situation is similar to the Africans working in Sicily: They come to Denmark via Danish agencies with administration offices in Denmark and recruitment offices in Eastern Europe. This construction allows Danish employers to benefit from exemptions in Danish regulations. The farmers or plant nurseries pay the agencies fee of 10-12 Euros per hour and the agency in return pays the workers an hourly wage of 6-7 Euros.

Lorenzo Trucco thinks the situation reflects a food system based on degradation. When farmers are required to sell their food as cheap as possible it forces them into looking for the cheapest possible labourers. “Consumers must understand that the cheap, canned tomatoes and other cheap products in the supermarkets very often are a result of this degradation – and paying a cent or two more for your food may translate into a large improvement for the workers”, he said.

He warned that Europe is actually moving backwards in time: “The competition on lower wages has led us to a new form of crime – slavery”, Trucco said. He suggested a total change of the regulatory framework, in which immigrants are seen as humans, not just illegal: “Initiatives such as social farming, which takes social responsibility into account, might point towards a solution of the problem”.

Jim Harkness, Director of the Institute for Agriculture and Trade Policy (IATP) in Minneapolis, believes US and EU civil society organisations should work together on CAP reform and US Farm Bill […]