Last year the European Union spent more money importing soya meal and beans than it did on coffee, even after a 45% surge in coffee prices and little change in the volumes. The soya trade values have not changed greatly year on year, despite the EU’s continuing dependency on shipments from Brazil and Argentina to feed intensive livestock.

The European Commission’s account of the EU’s 2011 third country trade figures paint a disturbing picture of dependency, above all else. Roughly one euro in every eight spent outside the European Union feeds livestock. That is without counting the soya fed to chickens for 2011 third country poultrymeat imports, worth one billion euros.

The EU remains a net agricultural exporter, matching the US total agricultural product sales of EUR 105 billion. However, the EU’s total 2011 agricultural product imports of EUR 98 billion were significantly ahead of the US figure of EUR 74 billion or China’s EUR 63 billion, according to the European Commission’s Monitoring Agri-trade Policy (MAP) newsletter.

The 14 most valuable food and drink export categories contain a number of big ticket luxury items that can hardly be said to feed a growing world population. EU wine exports have been boosted by the popularity of French wines, notably Bordeaux vintages and Champagne, in China. Sales of Cognac and whisky across the far east account for a surprisingly large proportion of spirit exports.

This business depends heavily on the restaurant trade, where high price spirits are served to elite corporate diners. It is common in Japan for restaurateurs to keep personal bottles of old Cognac for regular business diners, for instance. High value spirit sales may be good for business, but they do not feed millions. 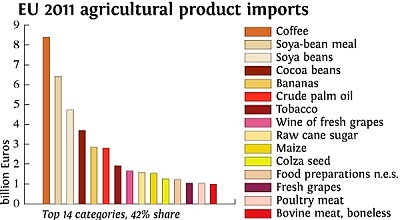 May 7, 2012 ARC Latest from the ARC network, Recent updates

In March 2021, the German Agriculture Ministers’ Conference and the Federal Ministry for Food and Agriculture agreed on important cornerstones for the country’s CAP Strategic Plan. In his preliminary assessment, Sebastian Lackner shows that while the resolutions have opened the door for a more ambitious CAP in Germany, it remains to be seen whether the federal and state governments will seize the opportunity when they decide on details still to be negotiated. […]