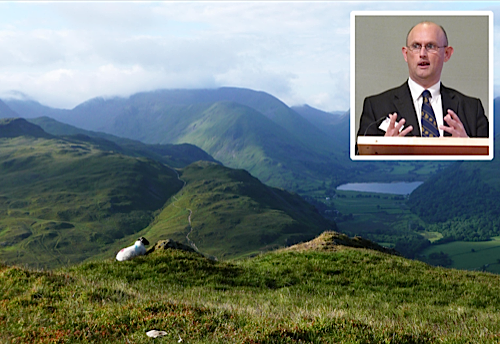 The UK Tenant Farmers’ Association (TFA) chief executive George Dunn (inset) is at loggerheads with the Welsh Assembly and environment ministry DEFRA over CAP support for agriculture in the UK’s moorland areas. The TFA is concerned over how new CAP support funds will be applied from January 2015, given the extent of non-agricultural uses for these upland spaces. Last November, Westminster announced that Severely Disadvantaged Area (SDA) rates for English moorland, currently paid at EUR 34/hectare could be raised to EUR 62/hectare.

This proposal has been challenged by farming organisations, including the National Farmers’ Union (NFU) which wants to see effective checks on the agricultural status of moorland uses. These have traditionally included hunting, shooting and fishing as leisure activities, which borrow an agricultural backdrop but have nothing to do with food production. There remains the nagging doubt that most of the increased CAP funding would be trousered by non-farming interests.

Welsh Assembly member William Powell has made similar points at regular intervals throughout the CAP reform process. He is urging a rural development plan (RDP) that will set up dedicated Areas of Natural Constraint on moorland areas. Writing on his website, he says: “Welsh moorland farmers have been left at a significant competitive disadvantage to other European Union nations, thanks to the Welsh Labour government’s decision to abandon dedicated support in areas of natural constraint. Instead of jeopardising the Welsh hill farming industry, the Welsh Labour government should take the time to study imaginative schemes, such as those in Northern Ireland, and use the RDP to deliver a dedicated support scheme to those farming Welsh moorlands.”

Tenant farmers in England and Wales take a similar line: “The TFA has made a strong case for the need to have an agri-environment scheme for moorland areas focused on grazing livestock,” advises Dunn. “[It is needed] to ensure that farmers in those areas are properly rewarded for the significant agri-environment benefits that are provided through grazing livestock systems in these most fragile and important areas,” he explains.

“Leaving moorland farmers without the benefit of that support is unsustainable and unjustifiable,” Dunn argues. “The TFA has therefore urged both the Welsh government and DEFRA to reconsider their positions and to discuss with the industry what might be possible to bridge the gap between sustainability and disaster.” The TFA has gone unheeded in both Westminster and Cardiff, so far.

“Both the Welsh Government and DEFRA have said they are not inclined to follow the TFA’s advice, causing both alarm and distress for individuals farming in moorland areas and those concerned about the conservation. These areas cannot be left lacking sufficient support without causing major agricultural and environmental detriment.”

Less Favoured Areas are the norm in Wales and account for 80% of the agricultural landscape, double the English proportion. Upland areas are also hampered by lack of internet access, which DEFRA will be using as the default CAP management medium.

The Welsh Assembly’s proposal to raise the moorland line to 400 metres above sea level sets a high threshold which will affect many farmers. For some of them, the existing moorland classification can account for half to two thirds of their current SPS funding.

For Dunn’s tenant farmer membership, pressure is rising. “If neither government is prepared to think creatively about this issue, we have no option but to argue that payment rates under the basic payment scheme should be increased for moorland in line with other areas,” he declares. “However there will need to be a robust set of criteria to ensure that the payment is only received by active graziers and is not siphoned off to line the pockets of other land owners.”

There are “strong links between politics and the biggest beneficiaries of the subsidies” in five Central and East European member states of the EU.  That’s according to a new in-depth study “Where does the money go”, which examines the implementation of the EU agriculture funds in Hungary, Slovakia, Bulgaria, Romania and the Czech Republic. The study, which was commissioned by the Greens/EFA political group in the European Parliament, sheds a stark light on how the CAP is not only funding degradation of biodiversity but also degrading democracy. Hans van Scharen reports. […]