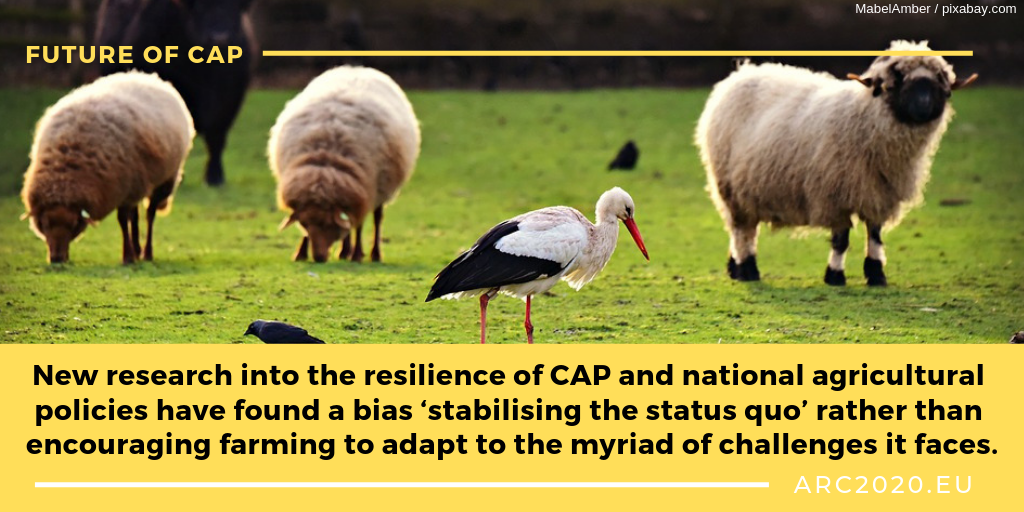 New research into the resilience of CAP and national agricultural policies have found a bias ‘stabilising the status quo’ rather than encouraging farming to adapt to the myriad of challenges it faces.

Under a project called SURE-Farm, the group of researchers are looking at how EU and member states’ agricultural policies have helped European farming systems become more resilient. In other words, how effective they are in managing combined economic, environmental and social pressure. In a recent report, the SURE-Farm found that policies generally have a short-term focus and lack the capacity to encourage European farming to be more resilient in the long-term.

The researchers examined the enabling or constraining potential of EU and member states’ agricultural policies through three dimensions – robustness, adaptability and transformability. Robust policies are conservative with a short term focus on preserving existing practices and business models, or the ‘status quo’. Adaptable policies have a middle- to long-term focus and promote the ability to learn and change to new circumstances. And transformable policies have long-term strategies that dismantle incentives of the status quo and enhance the uptake of new, innovative practices.

Read the report here: Assessing how policies enable or constrain the resilience of farming systems in the European Union: Case study results

The researchers applied this thinking to eleven farming systems across Europe, such as dairy farming in Belgium, fruit farms in Poland, hazelnut production in Italy and sheep grazing in Spain. The idea was to get a snapshot of European agriculture in a way that reflects the variety of the existing economic, social, environmental and political challenges.

SURE-Farm analysed direct result from decision-making processes, like policy programmes, laws or regulations, and ranked their impact on the resilience of these farming systems. They found ‘the dominant pattern is that the policies enhance robustness more than adaptability, which in turn is more supported than transformability’.

“the dominant pattern is that the policies enhance robustness more than adaptability, which in turn is more supported than transformability.”

One explanation for the focus on ‘stabilising the status quo’ is that ‘the bulk of resources go into payments that provide buffer resources for farms and enable the continuation of otherwise less profitable business models’.

Another key characteristic of robust policies is a short-term focus which is typically accompanied by quick adjustments to existing practices, rather than embracing innovation that drives significant change. The high rate of robust policies is a worrying result for European agriculture because overcoming deeply complex issues – like climate change, biodiversity loss or the lack of young farmers – requires policies with a strong long-term strategy.

That’s not to say that existing policies will fail to help agriculture systems better address some of its challenges. The report said that the CAP and its national implementations ‘do enhance the resilience of most farming systems in the case studies’, it is more that there is dominant pattern with policies that show ‘a clear bias towards robustness’. Which begs the question – how long can we rely on quick fixes?

Despite this, further optimism could be drawn from different instruments SURE-Farm identified which support adaptability or transformability, such as policies backing organic farming or new rural value chains. The report also highlights the importance of the European Innovation Partnership for Agriculture Productivity and Sustainability (EIP-AGRI) in developing resilient innovations that have the financial and academic might to penetrate into the mainstream.

There was even some evidence of dismantling incentives that ‘maintain the status quo’, like the reduction of direct payments and new legal requirements. But the report warns that these measures did not necessarily help farms transition to a more resilient system. If policies destabilise a farmer’s income then they could struggle to afford or adopt greener practices, which risks the local environment and cuts cash flow into rural economies.

One SURE-Farm system that reflects the risks and opportunities of a ‘transformable’ situation was British arable farming system in East Anglia. SURE-Farm analysed Brexit agricultural policies  that could indeed help the UK system transform itself to be more environmentally and socially resilient, but time will tell whether the trade agreements the British make would undermine such an approach.

Back in the European Union, where political change will not be as dramatic, the results still paint a worrying picture for the next CAP. NGOs, think tanks and environmental organisations have all expressed their fears that the proposed policies are more of a step backwards in terms of transforming European agriculture to be more sustainable. Considering some analysis suggests policies may end up prioritising production and income over environmental issues, it is hard to imagine the next CAP moving beyond a robust policy approach.

Fortunately, SURE-Farm researchers will continue their research to better understand the underlying differences in how farming systems react to combined economic, environmental and social challenges. Their final analysis will feed into the overall project and hopefully lead to development of more resilient EU agricultural policies in the future.

How Do Some EU Countries Get More Young People Involved in Farming?

CAP | Poland: In a Triangle of Tension?

About Steve Gillman 4 Articles
Steve is a sustainability journalist and writes about the key environmental issues facing agriculture and the food sector. He also works as a consultant on different sustainability projects for businesses, NGOs, and government organisations. Steve also co-founded a project with the WWOOF (Willing Workers On Organic Farms) organisation to explore sustainable agriculture and artisan food production. He is in the middle of an MSc in Business Sustainability from University College Dublin and also has a master’s degree in journalism and a BA in culinary arts.

The European Parliament’s Agriculture Committee voted Tuesday to allow for the extension of the current CAP system for up to two years. Critics however claim little time is saved in reality, while progressive change has now been stalled for longer. […]

Sebastian Lanker and Rainer Oppermann explain how CAP is failing environmentally, before outlining specific budget neutral proposals, including for sustainability and agri-nature payments. […]

Beyond quotas: how will Europe manage its milk?