Sustainable Food Trust director Patrick Holden welcomed delegates to a conference in London last week that has been waiting in the wings for the three years that the Sustainable Food Trust (SFT) has existed. From childhood, we all have a storybook image of farming that is innocent, idyllic and yet at odds with rural realities.

Sixty years ago, a market-driven mantra evoking the “need for cheap food” was used to justify the industrialisation of agriculture. Holden tells delegates: “…everyone forgot that cheap food meant destruction.” Recent history has been marked by increasingly poor returns for family farming. True-cost accounting is an attempt to unmask the supposedly invisible hand of the market that is thrust deeply into the pockets of family farming.

Prince Charles greets delegates on a pre-recorded video, acknowledging that: “There can be little doubt that producing enough food without doing irreparable damage to the earth’s biodiversity and to our health is one of the biggest challenges that we face.” For a future head of state to warn of “…powerful vested interests…” is unusual but not, in this case, out of character. After 30 years of advocating and adopting agroecology, Charles understands at first hand that the damage done to the environment “…is not one of those costs factored into farming at the moment. And yet it is such a huge cost.”

In commercial terms, the table is stacked against environmental good practice, he explains: “The numbers simply don’t add up.”

Charles attributes this to the economic invisibility of nature: “…the value of the planet’s ecosystems has simply not been taken into account.” In a twenty first century allusion to the work of eighteenth century economist and statesman Turgot, the prince warns: “We forget that the ultimate source of all economic capital is natural capital and not the other way round.” Two and a half centuries ago Turgot taught economics to none other than Adam Smith, while the young Scot was in Paris during a grand tour of Europe. Turgot’s tenet that: “…the land is the source of all value” was a lesson that Smith passed over, as have countless economists since. 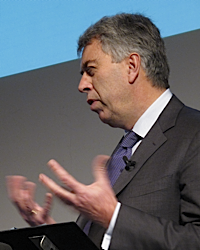 Blom: market has no answers

Modern economic orthodoxy talks about “externalities” rather than make any serious attempt to account for the environmental consequences of the industrial lifestyle. That is the basis on which the industrial world claims to be profitable and one that Peter Blom, chief executive of the Triodos Bank contests. “Instead of building on the past, we are borrowing from the future,” he declares, arguing that industrial farming is not making money, but heavily dependent on subsidies wherever they can be garnered. “This will not be solved by market,” Blom warns, adding that the real economy is paying for the mistakes of the financial economy.

“Externalities are the biggest free lunch in history!” exclaims Pavan Sukhdev, a leading light of the Corporation 2020 movement. As well as delivering the United Nations report Towards A Green Economy, Sukhdev was also team leader of the G8+5 project The Economics of Ecosystems and Biodiversity or “TEEB” as it is referred to in an administrative world populated by acronyms.

In a world where small farms cultivate 60% of the world’s farmland, Sukhdev is frustrated because governments fail to back family farms when making policy. The reason, he argues, is that this rich farming diversity does not generate easy pickings for the corporate sector. Small farms have a different kind of wealth, that eludes economic understanding. “Today’s politicians are followers, not leaders,” he complains, adding that private profits are often the other face of public losses.

Orthodox economics make it very hard to attribute meaningful costs to the social impact of outcomes that arise from externalised factors, such as climate or pollution. Nevertheless, “…the costs are real,” says Pete Myers, founder of Environmental Health Sciences. “What we know underestimates the true cost of chemicals: low doses matter.” Describing scientific tools, some of them developed in the 1950s, as dangerously “misguided,” Myers warns that the toxicity of agricultural chemicals goes way beyond farmworkers. “This takes chemicals into our kitchens.” 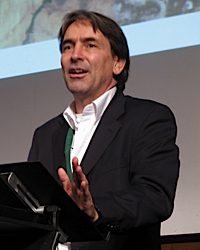 Biodiversity is far more powerful than chemical formulae. For the past three decades the Egyptian Sekem group has been bringing a new lease of life to hectare after hectare of desert, reclaiming hundreds of hectares of fertile farmland armed with little more than compost. When Dr Ibrahim Abouleish discussed his project with scientists in the late 1970s, none thought it could possibly work. “But we went ahead and did it anyway,” his son Helmy told the conference.

He concedes that it appears little short of miraculous: as one would expect, access to water and its management determines the level of autonomy that can be achieved. “But within two years we can have holdings producing their own compost,” Helmy explains. The key to this miracle is high-speed compost that harnesses the power of heat-loving bacteria and fungal root systems, he confirms to ARC2020. “Our composting cycle is around 75 days,” he adds. The good news is that this system is powered by biodiversity, like the planet.

Conference videos and speakers can be found at http://sustainablefoodtrust.org/articles/true-cost-accounting-conference-videos/