It is less than a year after the publication of the CRIIGEN long-term study into the toxicity of GM maize and RoundUp weedkiller. There are signs that the biotech industry has not had everything its way in the wake of the bitter personal attacks on the CRIIGEN scientists that followed their life span study on laboratory rats in France. 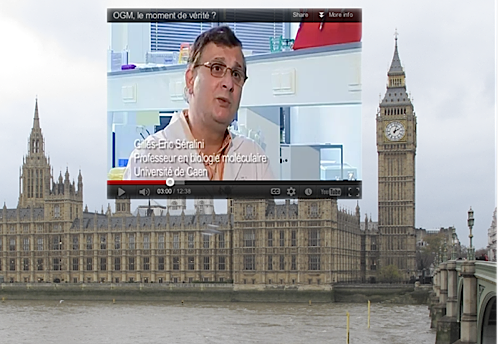 The lead CRIIGEN researcher, Dr Gilles-Eric Séralini, appeared before the petitions committee of the European Parliament in May after complaints that the European Food Safety Authority (EFSA) had been high-handed, opaque and partisan in its management of GM authorisations. Sadly, the evidence was taken in a closed hearing, but the outcome was a strategic withdrawal by EFSA.

“The EU is now going to tender for another long-term study and repeat the one we did,” Dr Séralini told ARC2020 earlier this month, just before addressing a packed meeting of the All-Party Parliamentary Group on Agroecology in Westminster. What still continues to amaze him is the way in which politicians fail to question authorisations based on the applicants’ data.

“The politicians accept commercial confidentiality without a murmur, in a situation where transparency is vital,” he explains, shaking his head. There is one thing that drives his campaign to unlock manufacturers’ raw toxicity testing data: “What matters are future generations,” he warns. His 2012 publication raises serious concerns over the risks to hormonal and reproductive systems. The low dosage groups of rats in his test study were receiving amounts of RoundUp residues and GM material comparable to a typical urban diet in the US, he added.

There was standing room only in the Palace of Westminster committee room: those present had come to listen to the only scientist to have carried out life span testing on rats of the toxicity of GM maize and RoundUp, the herbicide sold with it. As the most widely marketed weedkiller in the world, Dr Séralini is concerned that a high proportion of farm products test positive for RoundUp residues and is horrified that it continues to be used as a dessicant for cereal crops.

Also speaking at the same meeting was Danish pig farmer Ib Borup Pedersen: having worked on a pig farm since 1964, it was only in the 1990s that he started to see deformed piglets and lost 36 sows in two years. The common factor he found in the course of post mortem investigations was glyphosate residues in the organs of the affected animals. Here is a link to an earlier article about how Pedersen resolved the problem.

“The solution I found was to remove GM forage crops from their feed.” The result was a dramatic improvement in the farm’s performance: two extra piglets from every sow, who now have longer productive lives, as well as an end to the diarrhoea and dehydration that had been a constant problem. The savings on medicaments alone more than pays for the additional cost of GM-free meal.

His efforts to get the Danish government to back research into the causes of birth deformities in piglets have been stonewalled. However, it is not only the pig population that is suffering deformities that Pedersen believes have their origins in agricultural chemicals: he is encountering growing numbers of birth defects among rural communities.

Update on authorization of GM maize 1507

ViEWs journalist Ed Bray provides an overview on the potential authorisation of GM maize 1507 for cultivation in the EU. […]