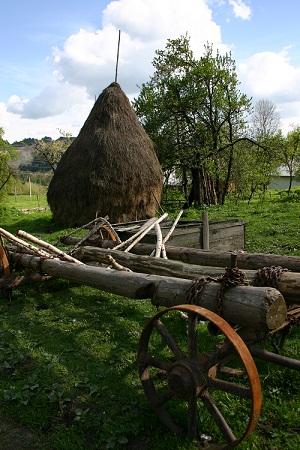 According to recent figures released by Eurostat, Romanian agriculture is highly unbalanced. That is not the big surprise. In the last 20 years the country’s agricultural landscape was in a continuous transformation; agrarian reforms without a long term vision, real estate and agribusiness “cowboys” from all over the world speculating on low prices, productions focusing mostly on export commodities…all in a country of peasants versus their institutional neighbours. The surprise lies in how different stakeholders interpret these figures. Let’s have a look.

Most leading countries present a balance between plant and animal production, also betting on the marketing of processed foodstuff rather than on volatile bulk commodity trade.

Certified organic to the rescue

The Romanian organic business representatives see the panacea in this highly developing sector. On one hand, their confidence lies in the premium price offered for these products, but moreover also on some new incentives signaled by the Ministry for Agriculture. According to the Bio Romania Association “the Ministry has responded to the needs of organic producers including a special package in the newly developed National Rural Development Plan for 2014-2020, dedicated to certified organic meadows and pastures”. Managed well, this measure could push animal smallholders to certify their fields. According to latest figures, 95% of the 17000 certified organic producers are animal farmers, and the majority of them hold 2-5 cows and an average of 5 hectares of meadows and pastures. In the vision of Bio Romania, the country could take a leading rank among the highest acreage of certified organic fields form the EU.

There is a great impediment in the strategy though. Organic certification is way out of the price range for most Romanian peasant farmers. Sure, they could attempt to access capital to pay the certification, but then they hit marketing hurdles. As most domestic consumers are unable to pay the premium price for processed products, most of the organic raw production ends up on wholesale towards foreign markets, most of the premium being eaten up by trader companies.

“Small is beautiful” vs. “fat-cat agriculture”.

Then there is the other rhetoric, the one purely based the ‘economic dimension’ of farms. A productivist concept where, according to big-ag, Romania cannot excel because of its fragmented agricultural landscape. Eurostat also shows that Romania is the most fragmented Eastern EU country. According to the Ministry for Agriculture, the country accounts for a little more than 830.000 holdings of 1-5 hectare while some 13.000 companies (many of them subsidiaries of multinational enterprises) hold more than 5 million hectares of arable land (the top ten controlling more than 150.000 hectares).

Multinational investors constantly warn the Romanian Government that they cannot invest in agricultural land as most of the lands are not figuring in the official land registry of the country. Seems that the only hurdles which stand against even more aggressive large scale land acquisitions are alternative land tenure systems and a national land law based on preemptive rights.

To increase productivity, indulge investors and solve the problem of fragmentation, the Government set up an ambitious plan. “In the next seven years, 250 million Euro were allocated through the European Sectoral Operational Plan. We hope to start with the rural cadastral registrations, as that is where it’s most needed in the light of the free land markets, but also from our strategic perspective regarding land consolidations…” assured Daniel Constantin, the Romanian Agricultural Minister.

On the other hand it is high time for Romania to take the recommendation of ex European Commissioner for Agriculture and Rural Development, Dacian Ciolos. At a conference on family farming Ciolos expressed that “Romania should not have the interest to export ships of cereals, but rather to export processed goods, as in these consumers would recognize the tradition and culinary traits of Romania, as well as the workforce which the country still has in the rural landscape.” Right now, Romanian agriculture seems to be stuck on the “export ship” vision, unfortunately as a side-effect, also exporting the above mentioned workforce along with it.

One glimmer of hope is the momentum behind participatory or group certification schemes in organic farming. This impetus comes from elsewhere in the world, EU institutions and the organic movement itself, as was pointed out last year here on arc2020. And while there has been some considerable controversy and EU compromise over the proposed EU organic regulation, IFOAM EU have not found fault with the group certification proposal.

How this might play out in the Romanian context remains to be seen.