Westminster’s dogged determination to back GM crops, come hell or high water, now means that England is the only country in the UK not to have banned the cultivation of GM varieties.

As the EU’s October 2 deadline for member states to take up the European GM opt-out approached, the Welsh deputy minister for farming and food Rebecca Evans confirmed to GMFree Cymru campaigners that her officials had been instructed to make a formal demand for GM crops to be excluded from Welsh territory.

“I remain unconvinced of the advantages of GM crops, and I consider it prudent to prohibit their cultivation here for the foreseeable future,” minister Durkan announced when launching environment week in September. “The pattern of land use here and the relatively small size of many agricultural holdings creates potential difficulties if we were to seek to keep GM and non-GM crops separate. I consider that the costs of doing so could potentially be significant and, in many cases, totally impractical,” he added.

“Further, we are rightly proud of our natural environment and rich biodiversity. We are perceived internationally to have a clean and green image. I am concerned that the growing of GM crops, which I acknowledge is controversial, could potentially damage that image.”

Lochead’s announcement was made: “…in line with our long-standing policy to protect our country’s clean, green 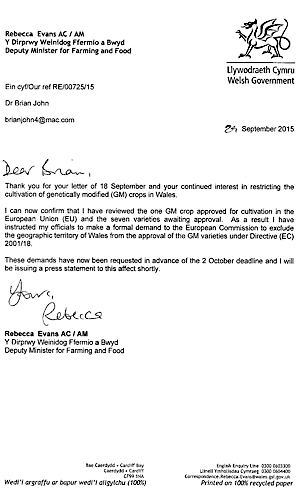 status. There are currently no genetically modified crops grown in Scotland and we should keep it that way.” His lines of argument are as incisive as they are carefully considered. “We are a nation with a global reputation for the beauty of our natural environment and for the excellence of our food and drink produce,” he explained.

“It would be foolhardy to jeopardise our unique selling point especially at a time when many around the world remain sceptical about the benefits of GM. There are also ethical considerations to be taken into account such as who would own GM technology and who would control access to it. The debate continues on the long term consequences of GM.”

His economic argument is a compelling one: “Our booming food and drink sector has generated 117,900 jobs in Scotland and is worth an incredible £14 billion to the country’s economy – up more than 50 per cent since this government came to power in 2007.”

Anyone who has ever been to an international food trade fair would agree with Lochead that: “Scottish food and drink is in strong demand both at home and abroad and often attracts a premium price. This success has been built without significant demand for GM products from Scottish consumers or our export markets. One major US-based food importer told me recently there will be growing demand for food from non-GM countries.”

So as far as Lochead is concerned, Scottish agriculture has no place for GM crops. “Scotland should stay focused on niche and high value markets, rather than commodities where we know we cannot compete. We need to focus on exploiting our natural advantages and reputation. For example, Scotland’s £80 million seed potato sector exports to dozens of countries around the world – a number of which specifically require confirmation that no genetically modified crops are grown here.”
Earlier this year, UK environment minister Liz Truss told the National Farmers’ Union conference that the UK would be: “…encouraging Europe to embrace scientific advances such as GM — the EU recently agreed to permit greater national discretion on GM products.” Fortunately for the people of Scotland, Wales and Northern Ireland, their ministers have had the foresight to use the opportunity while it was available.

One of the few bright spots of Brexit is the opportunity the UK now has to rewrite its agri-food and rural rules. The RSA’s report ‘Our Future in the Land’ gives some indication of what such a food and farming future might look like. The outcome? Agroecology! […]

Scotland | how to create a real Good Food Nation

With the political parties releasing their manifestos, Nourish Scotland tell us what is really needed to make Scotland a Good Food Nation. Hint – its about more than legislation! […]