Earlier this month the European Committee of the Regions (CoR) adopted an opinion on agroecology which puts forward a comprehensive set of measures to foster agroecology in the EU. The opinion highlights the state of play in European agriculture, noting the dangers of global warming, soil degradation and biodiversity destruction, and the need for agriculture to protect natural resources, reduce greenhouse gas emissions, foster biodiversity and move from an extraction mindset to one of circularity. The COVID-19 pandemic has amplified the necessity for “resilient, sovereign food systems”.

The CAP Reform: “An Unmissable Opportunity”

The ongoing Common Agricultural Policy (CAP) reform is identified by CoR members as an “unmissable opportunity to ‘green’ the agriculture sector, reduce its negative environmental impact and ensure food security in the EU”. To this end, the opinion proposes that the future CAP should promote agroecological practices such as crop diversification, the cultivation of leguminous plants, good and constant soil cover and the reclamation by farmers of local farmer-saved seeds and well-adapted local animal breeds.

The CoR opinion refers to the 10 Elements of Agroecology identified by the FAO – diversity, co-creation and sharing of knowledge, synergies, efficiency, recycling, resilience, human and social values, culture and food traditions, responsible governance, and circular and solidarity economy – and identifies benefits of the agroecological approach. These benefits include reduced reliance on inputs, the development of agriculture “with and within nature”, the development of living soils and the involvement of more small and medium-sized farms, mutual aid networks and short supply chains. 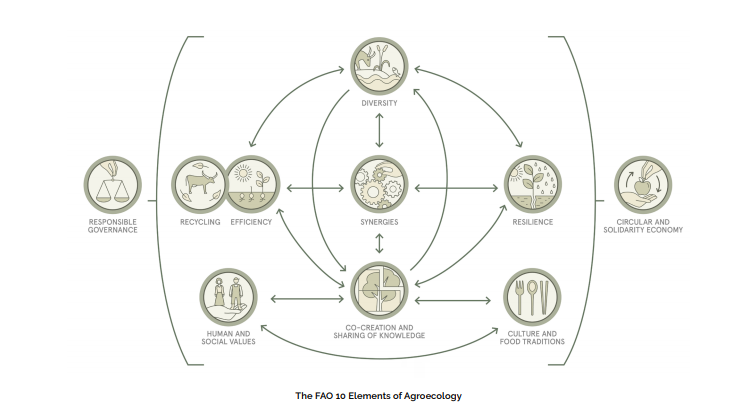 Guillaume Cros, Vice-President of the Regional Council of the Occitanie-Pyrenees-Mediterranean region and rapporteur of the CoR opinion on agroecology, said:

“Agroecology is the answer to the multiple challenges we face: the need to decarbonise our agriculture, reconquer biodiversity, restore soil fertility and enhance the economic and social resilience of our farms to ensure healthy, local and affordable food for everyone. Based on a network of small and middle-size farms, agroecology can also be instrumental in revitalising rural areas across the EU.”

CoR members voted for a number of operational proposals which traverse CAP reform,  EU legislation and local and regional policies. They include:

While welcoming the European Commission’s call for significant agricultural transformation in its Farm to Fork (F2F) Strategy, the CoR asks that the “new law on sustainable food systems announced in the F2F strategy integrate a binding legal framework to begin a genuine agroecological transition.”

Agroecology, as the CoR notes, “does not just take account of food production, but covers the entire food system, including fair working conditions.” Accordingly, the opinion also proposes the broadening of conditionality in the CAP to include respect for agricultural workers’ rights. This is a timely recommendation as calls for European agricultural policy to go beyond environmental and economic imperatives and respond to social injustices within agri-food systems become persistently louder. Just this week a broad coalition of trade unions, civil society organisations, non-governmental organisations and experts co-signed an open letter to key EU institutional players demanding social conditionality for a fairer CAP.

Solidarity from Brandenburg Farmers in Times of Corona

There is a simple explanation why I am writing as a farmer: when we as a society come under such enormous pressure that it raises existential questions, like the spread of the COVID-19 pathogen is doing, we have to reflect on what we really need in such a crisis […]

Yesterday morning, several hundred protesters descended on Strasbourg to call on the European Parliament to reform the CAP acknowledging the serious climate and environmental crises. This was the closing action of this years Good Food Good Farming campaign which saw over 90 actions in 23 countries. […]