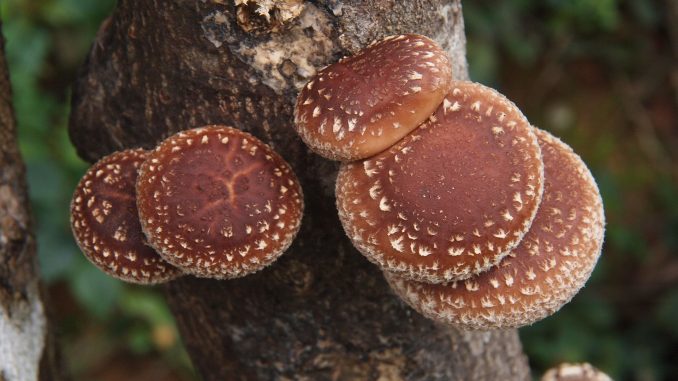 With the cold season setting in, we are back on Chiara Garini’s agroecolgical farm in Italy to talk mushrooms and sustainable forest management. Introducing Gunter Pauli’s Blue Economy concept, Chiara discusses the pros and cons of shiitake cultivation and how she has approached it on the farm.

“The key is simply to uncover value in waste,” Gunter Pauli wrote in The Blue Economy 3.0: The marriage of science, innovation and entrepreneurship creates a new business model that transforms society.

The Blue Economy principles laid out by Pauli argue that mushroom production only make sense when mushrooms are grown on substrates coming from food or agricultural waste. In such a situation, the mushrooms’ unique ability to decompose waste and transform it into nutritious food is efficiently used. This generates several positive side-effects and can be highly profitable.

Whilst we were initially designing the farm, we were attracted by the potential cash flow indoor mushroom production might bring. However, we then dropped that option for several reasons. First of all, indoor mushroom cultivation is more similar to industrial production than to farming. Even for a small, low-tech business, such systems are capital-intensive. At thee very least you need to buy or rent a building with all the infrastructures needed to keep the environmental conditions in the growing rooms under costant control. Additionally, the energy and material inputs required, such as the plastic bags needed to make the substate blocks, were too high to us.

Without a doubt the potential for recycling vegetal biomass by growing mushrooms is huge. It can be a great option for urban or peri-urban farming where large amounts of waste are available and deserted industrial buildings might be renovated for this purpose.

In our case though, we are surrounded by forest and thought we should make use of that.

So can forest mushrooms farming be sustainable?

Scale is one major issue.

Much of the shiitake commercially available are grown on Chinese oaks probably on an industrial scale or smaller scale farmers selling their products to large retailers who sell them on a global market trying to keep the price as low as possible. In these cases profit takes precedence over what is best for the local oak forests.

When you use logs as the mushroom substrate, the log is cut, inoculated with the spawn and left to incubate. On a mass scale, this leads to serious deforestation of Chinese oaks. However, if the scale of production is limited to small to medium farms working for quality rather than only quantity, the impact is reduced.

Some larger-scale case studies of shiitake forestry which do not seem so harmful to the environment can be found, like this one.

It is clear that more research is required to evaluate the sustainability of log-grown shiitake production thoroughly. Still I think the risk of generating negative externalities is limited if an agroecological approach guides this kind of cultivation systems.

For a start, rather than the mass production of one single product, diversity can be promoted – other mushroom species as well as plants or animals can be integrated into a forest farm.

Similarly, relying as much as possible on resources already available on the farm will reduce dependence on external inputs. For example, making use of the logs and microclimate of your forest makes more sense than importing biomass, plastic and lots of energy to run an indoor cultivation.

Such an agroecological system can produce high-quality products, safeguards ecosystems and should offer farmers direct access to local markets instead of mass-producing cheap products to be exported into the global market. Some farms which do this well are Wellspring Forest Farm and Hawk Meadow Farm in New York state.

What is forest farming?

Forest farming is the cultivation of non-timber forest products within an existing established forest. Not only popular tropical crops like coffee and cocoa are grown under forests canopy. Mushrooms and shade tolerant crops, like ginseng, thrive in temperate forest environment. Maintaining a forest canopy is essential for this kind of production, therefore deforestation is not an option.

Since you rely on the canopy in order to grow your crops, forest farming provides an incentive to manage forests to support their health. Such complex multispecies ecosystems provide environmental benefits as well as high value products. This is true both for tropical and temperate forests, including the ones in my region.

Shiitake mushrooms on our farm

The forests surrounding my farm in the Trento province of northern Italy are not primary forests. They have been in human usage for centuries. Until the first half of the 20th Century, local populations seriously depleted the forests due to excessive logging (especially during the two world wars) and destructive pasture use. Eroded mountain areas left with bare soil and no vegetation were subject to reforestation projects with large plantations of Austrian black pines.

Since the second half of the 20th Century, forest management in the Province of Trento radically changed and the so-called close-to-nature silviculture principles started to be applied. The clear-cutting of large areas is forbidden and a forest canopy is always covering the soil thanks to natural regeneration. Trees are cut down sparsely after a close examination of the area, in order to promote forest health, diversity of species and ages of the trees.

The aim is to support the (re-)creation of mixed forests with a complex structure that can foster biodiversity while maintaining the multiple other roles forests play. These include carbon storage, use for tourism and recreation, timber and firewood production, preservation of soil and water and climate change protection.

Taking these aims into consideration, forest farming of shiitake mushrooms can fit into a sustainable forest management plan. Small diameter logs thinned out for timber stand improvement have low value for timber but are perfect for being inoculated, generating high added value products while maintaining the forest. This makes me think that there are very good opportunities for forest farming in alpine regions. There will need to be much more work to perfect this innovative approach to farming and forestry.

On our small farm we have cleared out all the diseased trees from the 1500 square meters woodland in order to have a good space for the log-grown shiitake cultivation system.

Sure enough, preparing a steep woodland area for stacking, moving and soaking 300 logs (which will be 600 next year and 1000 the year after) was not as easy as studying the Cornell University mushroom cultivation website!

So far, we have planned all the logistics of the laying yard and identified the areas for inoculation, incubation and harvest. We have started building a pond for soaking the logs and are looking for a tracked wheelbarrow to move the logs around. We are hoping to involve the local forester to set up a sustainable yearly harvest of the logs from our forests in line with the close-to-nature silviculture and are going to put into place the 300 logs we’ve inoculated last winter. Now we are prepped for forest farming in the coming cold months – let’s see how it goes!

‘Farm land could work as carbon sinks,’ said Dr Jan Mumme, an agricultural engineer at the University of Edinburgh in the UK. ‘This probably wouldn’t work with intensive livestock farming, but sustainable crop production and integrated farm systems (a balance between crops and livestock) could do it – and biochar is one way to help.’ […]

“Exploit all available tools” – German platform on the Eco-Schemes

German agriculture will need a shake up to meet environmental targets and challenges. Here the platform of 20 food and farming organisations share their response to the proposed eco-schemes in the post-2020 CAP. […]