The lack of funds by international donors and European countries towards agroecology is a blocking factor for the transformation needed in our food systems.

Over the past years a clear consensus was reached around the need to profoundly transform our food systems in order to cope with the multiple crises we face showing themselves through hunger, poverty, environmental degradation and other tragic phenomena. In addition, the Covid-19 outbreak shed light on the vulnerability and the lack of resilience of our food systems, asking for this transformation to happen even faster. Agroecology, identified as a way of redesigning and managing food systems while achieving economic, social and ecological sustainability, has been recognized as pivotal to this paradigm shift. Its role to achieve crucial global milestones such as the Sustainable Development Goals and the Paris Agreement is now clear as well and widely acknowledged.

A recent briefing published by CIDSE in partnership with the Centre for Agroecology, Water and Resilience at Coventry University, however identifies a funding gap by international and European institutions towards agroecology and therefore a clear mismatch between intention and practice. Such institutions, according to the data, still channel their funds mostly to “business as usual approaches” to agriculture or to projects enabling conventional agriculture and efficiency improvements. As the report argues, without a shift in the funds from these institutions it will be very difficult to achieve the radical shift in food systems which is needed to tackle climate change and ensure food security.

Read in Full and Download: CIDSE Agroecology and Finance Briefing-Sept-2020

The report identifies similar trends in funding for agroecology at European Union (EU) and Green Climate Fund (GCF) level. Projects supporting transformative agroecology aimed at redesigning food and farming systems were exclusively found in the GCF portfolio and represent 10.6% of the total invested in agricultural projects.

Looking more closely at the European Union, the report analyses funds channeled by the EU through the “Rome-based agencies” (FAO, IFAD and WFP) between 2016 and 2018, and finds that only a minimal part, 2.7%, refers to projects that represent a first steps towards agroecology while the rest promotes conventional agriculture and efficiency-oriented approaches, such as sustainable intensification.

Are the trends that were identified above also reflected at the national level in Europe? To answer this question, the report examined a growing series of research reports mapping national financial flows in support of agroecology in Belgium, Germany, Switzerland, the United Kingdom. This mapping reveals some disparities. In the case of Switzerland, which seems to be the exception, 51% of agricultural research for development projects had agroecological components. In all the other cases available at national level, the financial support for transformative agroecology is either minimal (Belgium, Germany) or inexistent (UK).

It’s a different story however when the analysis looks at public money channelled through and handled by NGOs and Africa-based institutions; these tended to be much more supportive of agroecology. In Belgium for instance 48% of the non-governmental flows promoted transformative agroecology. In Switzerland they identified that projects led by Africa-based institutions usually adopt a more systemic and inclusive approach, enabling agroecology, but these organisations receive relatively little funding from Swiss public donors.

The report also highlights the high influence that the EU and its member states have in international arenas where key decisions about food and agriculture are taken. The European Commission and European countries are major donors of agricultural Official Development Assistance and a major source of finance for international institutions focusing on food security. European countries are also key players in most of the governing bodies of these institutions while the European Commission is only represented at FAO (see the table below).

The European Commission’s Green Deal communication along with its Farm to Fork and biodiversity strategies all include agroecology as crucial for sustainable and just transitions. These initiatives should represent the ambition of the EU as a leader of sustainable food systems not only within the Union but beyond through international cooperation, bilaterally and multilaterally.

European countries (including extra-EU countries), the European Union, international organisations (FAO, IFAD, WFP), together with the Green Climate Fund, have the potential to play a big role in supporting the transformation of our food systems. Based on the current situation, the room for improvement is huge and in view of the crises humanity is facing, the finance should redirected sooner rather than later. 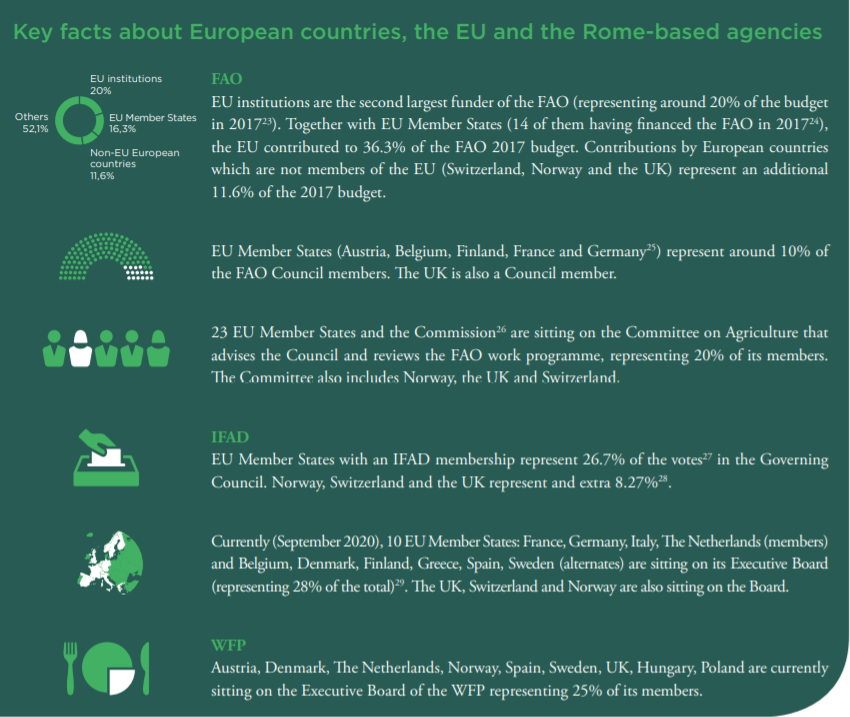 Table extract from CIDSE and Coventry University report “Finance for agroecology: more just than a dream?”

15 times more pesticide poisonings occur annually now than 30 years ago. About 385 million cases of acute unintentional pesticide poisoning occur each year, according to a new systematic review on global pesticide poisoning. This is up from 25 million annually in 1990, the last year such an estimate was made. Here Justice Pesticides outlines key findings of that review, as well as a study on pesticide contamination near intensively managed agricultural areas in South Tyrol, Italy. […]