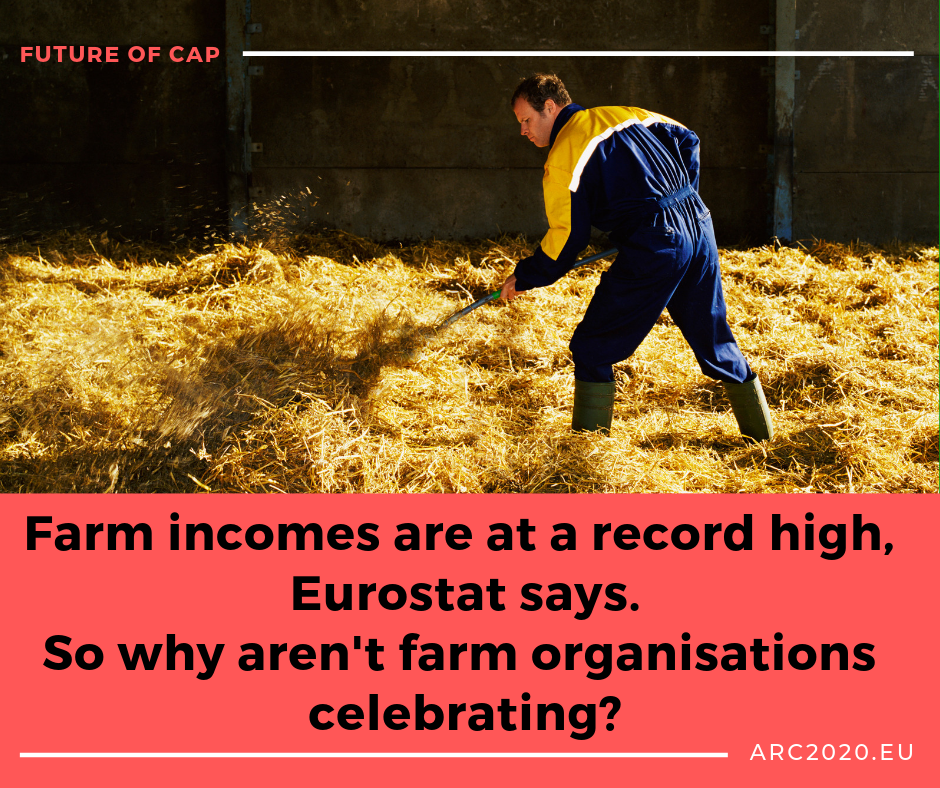 According to Eurostat statistics farm incomes are at a record high. So why aren’t farm organisations celebrating? And what do these numbers say about actual farm income in different member states of the European Union?

Eurostat statistics show that farm incomes have been on a record high in 2017, with European Union farmers earning 38.5% more compared to base year 2010 -at least when calculating farm income as the real agricultural entrepreneurial income – after deducting the value of paid wages, interests and land rents from agricultural factor income and then divided by “unpaid annual work units.”

In 2018 this real family farm income dropped somewhat – but still is 30% higher compared to 2010. “This is surely something to be welcomed, even if COPA-COGECA did not issue a press release to draw attention to this fact,” political economist Alan Matthews of Trinity College Dublin notes. “Across the EU as a whole, income from farming when divided among those working in the industry is in a robust state, even if the regular grumbling from industry representatives sometimes gives the opposite impression.”

According to earlier statistics, family farm income saw a rise of almost 20% on average between 2001 and 2010. But Matthews also notes several points of criticism when it comes down to using the values as presented by Eurostat as absolutes. For example in EU countries where a significant proportion of agricultural production is organised in corporate rather than family farms, he writes in a blog post about last year’s high farm incomes: “The trend in agricultural income must not be confused with the total income of farming households as it does not comprise income from other sources. It also makes a difference whether the main contribution to the record 2017 figures comes from more buoyant agricultural income or from a more rapid exodus of workers out of the industry, perhaps stimulated by improved economic opportunities in the non-farm sector as EU economies recover from the recession caused by the economic crisis in recent years.”

Pekka Pesonen is secretary-general for the influential European agricultural organisation COPA-COGECA. He first and foremost notes that average European farm incomes cannot be looked at separately from the rest of society. “Yes, we have had a good trend in recent years. The data from 2017 have indeed been a record in terms of income. But for year 2018, we already see a 3% decrease and agricultural incomes are still well below other sectors. This is not something we can possibly be happy with.”

Pesonen himself is from Finland, one of the countries where family farm income has fallen by as much as 50% since 2010. According to Eurostat, six EU member states actually show lower agricultural income in 2017 than in 2010: Finland, Belgium, Greece, Germany, Malta and Slovenia. He stresses there are other factors to take into account besides just the Eurostat numbers: “There are several driving forces hidden behind the indicator. For example the fact that there is lower labour input is one of them. As you have less people to distribute the income to, you have bigger average income either way, no matter other consequences. The indicator also does not follow the input costs, which are steadily increasing on yearly basis and are expected to continue to do so. Also the average farm income does not provide information on national level, and the situations vary significantly between member states.”
Exactly that last point is also pointed out by Matthews. Despite the rising average incomes, Matthews concludes that European agriculture continues to be distinguished by a great heterogeneity concerning income developments in different member states and stresses that “this should be remembered when agricultural income trends in the EU are under discussion.”

In a broader sense, rising farm incomes seem to be contradictory with the trend of farmers having harder times on the market and farms closing down around the continent. “Farm exits are an inevitable process which are driven primarily by rising labour productivity and thus income in the non-farm sector,” Matthews explains.
“Young people, increasingly educated, make a career choice on finishing education and often decide they do not wish to follow in their parents’ footsteps and enter farming, so that farm is consolidated to allow those remaining in farming to increase their productivity and thus incomes. It is the smaller farms that have the highest production costs and thus will tend to be the first to exit.”
Matthews has more to say on young farmers here too, pointing to some countries policies, such as Austria’s, which are more successful than others.
About Hans Wetzels 34 Articles

Lack of access to affordable land is one they key obstacles to new farming entrants. The sector is suffering from a seriously aging population which puts the future of European small-scale farming at risk. How can we encourage more young people to get into the profession when access to land is so tricky? Natasha Foote talks us through the problem and explores one exciting approach on the vineyards of Southern France. […]