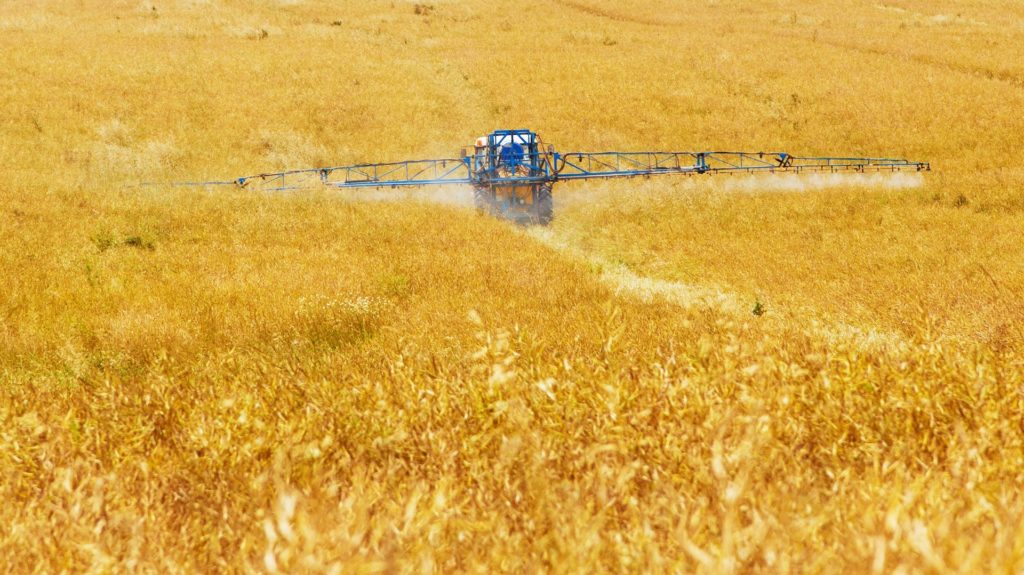 With insect Armageddon and biodiversity collapse making the headlines, pesticides are public enemy No. 1. Scientists are now naming and shaming pesticides as a key driver of biodiversity loss. Even the European Parliament has caught the bug. Reminding member states that pesticides should be a last resort, MEPs insist that the new CAP must do more to shrug off our dependency on agrochemicals. Meanwhile farmers are showing that – with the right supports – instead of scapegoats for biodiversity loss, they can be part of the solution.

It’s been a busy time for biodiversity. A UN report that laid food security on the table made even climate doubters sit up and take notice of biodiversity loss. There is a real risk the plant and animal species that provide our food, fuel and fibre could disappear for good, shows the landmark report published on February 22 by the Food and Agriculture Organization. “Less biodiversity means that plants and animals are more vulnerable to pests and diseases. Compounded by our reliance on fewer and fewer species to feed ourselves, the increasing loss of biodiversity for food and agriculture puts food security and nutrition at risk,” commented FAO chief José Graziano da Silva. Species that contribute to the food ecosystem, such as pollinators, soil organisms and natural enemies of pests, are under severe threat, the UN report finds. Deforestation and intensified agriculture are identified as the key drivers of biodiversity loss in Europe.

Only the previous week, The Guardian warned readers that insects could vanish within a century. In a story that went viral on social media, Damian Carrington cited a scientific review warning that the breakneck speed of decline in insect populations could lead to a “catastrophic collapse of nature’s ecosystems.” The paper published in the journal Biological Conservation indicates that 40% of insect species are in decline and one third is threatened with extinction. Insect populations are in freefall, plummeting by 2.5% a year, the collated global data shows. The researchers point to habitat loss and pollution as the main culprits – placing the blame largely on pesticides and other agricultural pollutants.

No 🐝, no 💐
No 🦋, no 🍫
No 🐞, no #Valentines
Scientists are warning us: more than 40% of 🌍 insect species are declining & 1/3 are endangered.
On March 21st, we will be launching our new #EUPollinators campaign and we need you on board. https://t.co/wzgPa1S3EX pic.twitter.com/Vfly6LUlWO

The European Parliament agrees. Pesticides are one of the main factors responsible for the decline of insects across Europe, it says, yet the rules on pesticide use are being ignored. After a February 12 debate on implementation of the 2009 Directive on the sustainable use of pesticides, MEPs stressed the need to link the directive to the new CAP. The absence of integrated pest management (IPM) in the European Commission’s post-2020 proposal will make it harder to move away from pesticide dependency.

The European Parliament’s Vice-President, Irish MEP Mairead McGuinness, said: “The parliament overwhelmingly expressed concern about the loss of biodiversity reflecting public awareness of, and concerns about, biodiversity loss.” In remarks reported by Aisling Kiernan in AgriLand, MEP McGuinness noted that “member states differ significantly in how they implement the directive in the design and quality of National Action Plans (NAPs) and in the implementation of Integrated Pest Management (IPM) measures.” Each member state should set out targets, measurements and timetables to reduce pesticide use in a comprehensive NAP, she explained. “IPM is the cornerstone of this directive and it seeks to use a broad range of pest management techniques and tools, including physical and biological, with the use of agrochemicals as a last resort,” added MEP McGuinness. She welcomed the European Commission’s decision to establish Harmonised Risk Indicators (HRI) which will facilitate the monitoring of specific aspects of the directive. Meanwhile the European Parliament rejected calls for a 50% reduction in the use of pesticides, preferring sustainable, non-chemical methods “if they provide satisfactory control,” reports AgriLand.

“If we were coal miners, we would be up to our knees in dead canaries.”

In his speech at #biodcon19, President Higgins speaks of the damage being done to our natural world by current models of development. pic.twitter.com/14fMPyeldq

The state of the world’s biodiversity is even worse than we had previously thought, confirms Aleksandar Rankovic of Paris-based sustainable development think tank IDDRI. Commenting in a blog post on the paper published in Biological Conservation, Rankovic notes that the data on chemical inputs in the Global South is incomplete, meaning the situation may be “even more serious.” A new agricultural model is needed to turn around these trends. He points to IDDRI’s Ten Years For Agroecology (TYFA) model which demonstrates how Europe could be fed sustainably by 2050. Mapping out a transition to agroecology, the TYFA model envisions phasing out the use of pesticides and synthetic fertilisers, redeploying natural grasslands and extending agroecological infrastructures such as hedgerows and ponds. On the consumer side, the model envisages what it terms “healthier diets”: by 2050 Europeans will need to be eating more fruit and vegetables, and fewer animal products.

Farmers as Custodians of the Land

Also in February, Ireland held its first national biodiversity conference. President of Ireland Michael D Higgins in a keynote speech praised the “success of the innovative farmer-led programmes” that respect “the important role of farmers as custodians of the land”. Regretting that only a handful of farmers are engaged in such biodiversity programmes, he questioned “whether we are making best use of the significant level of public money that is being spent on environmental measures in the agricultural sector and whether we are doing enough to harness the goodwill of farmers towards biodiversity protection.” He drew attention to the “critical role for the European Commission and for our own authorities in creating the context in which Irish farmers can move quickly towards truly sustainable agriculture.”

One success story for farming and biodiversity is the Burren Life Farming for Conservation Programme. By incentivizing local farmers to be part of biodiversity protection in this fragile ecosystem in the West of Ireland, the results-based payment scheme is changing the mindsets of farmers: instead of “scapegoats” for biodiversity loss, they now “revel” in their role in protecting and enhancing biodiversity, explains Shannon Parr of Burren Life. The programme is “making conservation a product just like the animals stocked on the land,” she told the national biodiversity conference in Dublin, reported Green News Ireland.

Meanwhile in Switzerland, sales of synthetic plant protection products have fallen by almost a third over the past decade, according to figures released in February. Eva Reinhard, head of the agricultural research centre Agroscope, credits the decreasing reliance on PPPs with “alternative methods” developed in recent years, such as mechanical weed control, and the use of companion plants that can enrich biodiversity and help to reduce pest pressure by providing new habitats for beneficial insects. She also believes public debate has made Swiss farmers less likely to reach for PPPs.

The strict Swiss regulatory regime places biodiversity at the heart of agricultural policy. Subsidies for Swiss farmers are pegged to compliance with regulations on pesticide use, nutrient budgets, crop rotation and livestock. Farmers are also required to set aside 7% of farmland for Biodiversity Promotion Areas (BPAs) such as grassland, hedgerows and wildflower strips. Direct payments for ecosystem services are designed to compensate farmers for loss of income. Agroscope’s role is to develop direct and indirect alternatives to pesticides. “We only resort to synthetic plant protection products once all other measures have been exhausted,” explains Reinhard. The research centre has developed digital early warning tools that help farmers to optimize pest control measures and spray crops “as little as possible, as much as necessary”.

Biological pest control experiments carried out by Agroscope have found wildflower strips in arable crops to be another useful tool. When strips of cornflower, coriander, buckwheat, poppy, dill and other species were planted alongside fields of winter wheat, the incidence of the harmful cereal-leaf beetle in the crop was reduced by 40 to 53%, resulting in 61% less damage to the wheat. Agroscope works with farmers to tweak seed mixes to attract specific pollinators and other beneficial insects.

To deal with late blight in potato crops – a disease commonly treated using large quantities of fungicides – Agroscope has been looking at genetically modified varieties. GM Desiree potatoes for example have been found to be resistant to the blight pathogen. But GM leaves a bad taste in the mouth of many consumers. As Reinhard puts it, “consumers do want pesticide-free products, but they’re not yet prepared to accept genetically modified plants.” To mitigate the need for early spraying of potato crops – a practice found to be more damaging to the environment – Agroscope offers potato farmers a specially developed app to alert them to potential infestations.

The science from these events and publications presents a bleak picture for biodiversity. The trends are alarming, and possibly irreversible. Clamping down on pesticides may be a tempting quick fix to offset the decline of insect populations, but the European Parliament recognizes it’s not as simple as restricting use of PPPs. Given a nurturing environment, creative solutions can flourish. Smart technology and targeted plant protection methods will arm farmers with practicable alternatives to agrochemicals. At the same time farmer-led initiatives can yield positive contributions for biodiversity and for local communities. As the Burren Life Farming for Conservation Programme has found, results-based payment schemes can put farmers in the driving seat, while delivering better value for the taxpayer and a measurable environmental impact. In tackling the pest control conundrum, farmers need to be given a chance to prove they are part of the solution.

Calling on the Next EP for a Common Food Policy

Today, thirty-three food and farming organisations, including ARC2020, have published an open letter to the top candidates for the next European Commission President to push for the implementation of EU Common Food Policy. Read it in full here. […]

China Invests in Montenegro – How are Farmer’s Impacted?

Montenegro is investing heavily in a new highway to connect rural inlands with the coastal port city of Bar. But will farmers actually benefit from the hugely expensive project? Hans Wetzels has more. […]