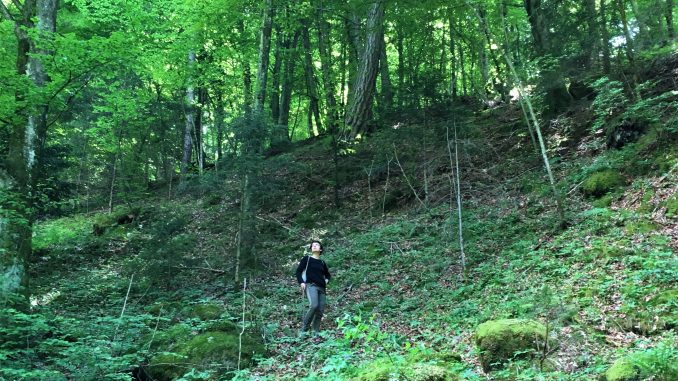 We return to Chiara Garini’s agroecological farm in Italy’s Trento Province to see how she has been getting on. In this letter, she tells us of the importance of paying attention to the soil and the soul.

As a budding agroecological farmer I want to begin this letter by talking about the preparatory works for my farm. These include what feels like a chaotic myriad of tasks and decisions which would not be simple to put into words. For the sake of clarity I came up with two major foundations that need to be established for an agroecological farming project to advance. Soil, of course, and souls. In order to not go on too much on technical debates about soil management or on personal psychological analysis, I decided to face both topics in one article, so that soil can feed our souls and vice versa.

First then, how to prepare the soil without having a tractor?

Let me make something clear. The easiest asnwer is to subcontract to farmers who do have a tractor.  This is how we managed to prepare the 5000 m2 of land before planting the mycorrized hazelnuts – as it also entailed adding about 100 cubic meters of sand; but I will get back to this in a next letter.

Subcontracting the work was also required for explanting the 5000 m2 of vineyards cultivated on the traditional “pergola” trellising system (made up of one 3 m cement pole and two 3 m wooden poles every 5 meters).

After this major operation, we had a blank canvas upon which to start planning our cultivation system.

The area you see in the pictures below (about 1200 m2) is where we established the aromatic herbs production and a small vegetable garden for self-consumption. We decided not to have the soil ploughed by the subcontracted tractor but to maintain the nicely biodiverse mixed-species grass that was sown under the vineyards by the former farmer. This decision revealed some pros – having an already established mix of species, including clover, around us, instead of a muddy field – as well as some cons. One above all was having to weed and work the soil by hand in order to prepare the permanent bed for the herbs.

Going for permanent bed has always been on the cards. Since our first veggie cultivation trials we always believed building permanent bed instead of annually working the soil was the way to go. Jean-Martin Fortier with his book Le jardinier-maraîcher was a primary source of inspiration. So too was the book Miraculous Abundance by Perrine and Charles Hervé-Gruyer of La Ferme du Bec Hellouin. John Jeavons and his “double-digging” soil preparation provided more guidance.

Unlike the video, I have to say our work was not that smooth! But we did manage to prepare our forty-five 3 m2 permanent beds.

We opted for re-using material we had available, and used the wooden poles from the pergola trellising system to contain the sides. Then we got our spading forks and started working. We followed the technique described by John Jeavons. We started by weeding, which in our case felt pretty much like pulling a grass carpet away from the ground. Then we methodically lifted a first layer of soil and aerated the lower layer with the spading fork.

While doing this operation it was remarkable what tractor-caused compaction feels like. In some points – undeniably along the lines where tractor wheels have been passing for the last 30 years or more – it was almost beyond the limits of my strength to push the fork down into the soil. In other parts instead, after removing the grass layer, I was really pushing down the fork smoothly! We added some composted manure on top of the bed only for the vegetables as aromatic herbs generally have low nutrient demands.

The evidence of what tractor use does to the soil layers plus the awareness that permanent beds  require the initial preparation effort only once, reaffirmed our conviction in permanent beds.

Moving on to our souls.

Dealing with all the decision-making and responsibility-taking often put our stress tolerance to the test. The question I have been regularly asking myself in the last months is: how can I transform potential anxiety and stress into plans and tasks?

One answer is to be rational which means taking the time for design. Maps are the first useful tool to deal with the bursting brains of aspiring farmers. Drawings are great for visualizing the many ideas that spur our enthusiasm every day. Maps require us to translate that enthusiasm into real plans, moving from imaginary desire to numbers, meters, borders issues, regulations to respect, exposure and microclimatic considerations and so on.

Having a large printed map laid out on our desk allowed us to overlap different layers on top of it in order to define several aspects, from hedgerows and fence design to irrigation plans. On this map we also used scale models of trees to visualise trees heights and spacing. From this broad map we then drew operational maps on graph paper to be used when planting. These were fundamental to calculate exact plant positions and to keep track of the multitude of species planted.

Scheduling tasks requires dedication as well. Research and development, marketing and communication, burocracy, economics and work management are all categories to take care of for an emerging farm. In order to deal with all these aspects we regularly take a half day for organising our fast growing to-do list. We found a useful approach to be brainstorming all the tasks that come to our minds. We then collocate each task into a graph that has importance on the x axes and urgency on the y axes.

All the tasks need to be done but at least we can visualize them all in a form that is less overwhelming than a simple to-do list. In this way we can take a deep breath and transform potential stress into a set of responsibilities and tasks to be faced step-by-step along the slow path we are following.

Rationality alone is not enough. Emotions need space for expression as well. Being self-employed  is great as nobody tells you what to do and when. The risk though – at least in my case – is that you become an excessively strict boss to yourself. It is crucial then to allow some time-off, even though the to-do list is worringly growing! I could say then that walking in the forest, swimming in the lake, meeting friends, practicing yoga, cooking, reading a book, listening to music, watching a movie – the list goes on – are all crucial components to the work on the farm.

After more than 2 years of negotiations since June 2018, the three EU co-legislators found an agreement on the regulations for the future Common Agricultural Policy post-2022 (CAP). Much of the attention is now moving on the 27 Member States who will be in charge of implementing these regulations via the future National CAP Strategic Plans 2023-2027. […]

Civil society steps up for seeds in Romania

The earth beneath your feet is life giving. Today is world soil day so let’s explore the marvels of that more simple yet spectacular of things – dirt. Read on for a treasure trove of soil resources. […]