When thinking of German pig farms, perhaps you imagine pretty pink piglets sucking their sow in bright green pastures and Dirndl-clad ladies with bright and comforting smiles and lots of clean and lots of green.

Such farms must exist but not in this story. Germany is also amongst Europe’s largest industrial animal and meat producers with a strong preference for pigs. Just to give you an idea: in May 2013 Germany was farming 28 million pigs, concentrated mainly in the two counties of Niedersachsen and Nordrhein-Westfalen.  There the density of industrial pig farming so much so increased that in certain areas the man-pig ratio is 1:8. A recent article published in Germany’s renowned publication Der Spiegel, finds that today 33% of Germany’s pig farms farm more than 1000 animals; this compared to 3.4% in 1999. Close to 60 million pigs were slaughtered in Germany during 2012. The country’s 500 largest pig farmers farm something like 4.6 million pigs.  And pig business is big business, with German pork meat exports alone being at 1574 million dollars for 2011.

With so many pigs being farmed on such small spaces not all is bound to go well. Statements such as “Germany has strict laws for humane animal husbandry. We don’t make them suffer,” and “We need facts, not claims,” reflect however, the government’s response to angry citizens asking for smaller farms, better conditions and better regulation. 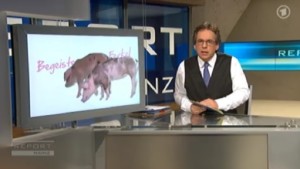 During prime time the ARD TV channel aired a documentary verifying film material previously gathered by the animal welfare organization Animal Rights Watch. Filmmakers had installed hidden cameras at industrial piglet farms. Over several days, employees were observed unnoticed. Piglets were regularly beaten to death shortly after birth to dispose of superfluous and weaker animals. Each morning company employees examined the piglets; hitting weaker bodies with brutal violence on the floor or against the walls of the bays. It can be clearly seen how some of the piglets are not instantly dead, but suffer on for several more minutes.

The film recordings were made at three German farms, including at the Straathof Holding company, Europe’s largest piglet producer.

Following an outbreak of the African swine fever virus in Lithuania, Russia has stopped all imports of pork from EU countries on January 31. […]