Romania – Producers are throwing their milk onto fields protesting against the irresponsible triggering of the aflatoxin scandal by the authorities and the constant pressure from processors to acquire milk more cheaply. 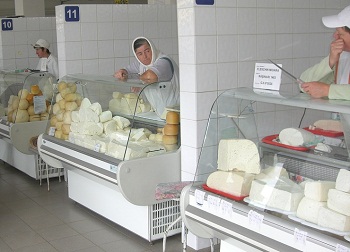 Aflatoxins are a group of chemicals produced by certain mold fungi. Aflatoxins are harmful or fatal to livestock and are considered carcinogenic (cancer-causing) to animals and humans. Aflatoxin levels are highest during hot, dry summers as was the case last year.

The current scandal of milk contaminated with aflatoxin started on the 7 March, at a time when Europe and Romania were still analysing the after effects of the horse meat scandal, not to mention the high levels of antibiotics in poultry. The first declaration came from the Minister for Agriculture, Daniel Constantin, stating that aflatoxin contaminated milk had been identified in Hungarian milk imports, and at some Romanian processors.

13,800 litres of milk were withdrawn from the market.

Later, the National Sanitary Veterinary and Food Safety Authority announced that high amounts of aflatoxin had been found in just three Romanian milk farms and two milk processing units. The Authority also stated that, in the case of the milk imported from Hungary, the laboratory analyses did not prevail any exceeding in aflatoxin levels.

The outcomes are disastrous for producers. Two out of five Romanians decided not to buy milk, losing their trust in producers and processors. More and more producers are facing bankruptcy, throwing away good milk which nobody wants.

“Milk producers now harvest, mostly unfairly, the result of a few weeks in which consumers were bombed with information on scandals linked to the quality and safety of Romanian products. The milk thrown to the field is an extreme gesture of some people who have done their jobs correctly and now face bankruptcy because of others irresponsibility”, declared Dacian Cioloş – European Commissioner for Agriculture and Rural Development speaking to the the Mediax news agency.

Romanian authorities “have it under control”

Authorities in Bucharest banned milk from five farms after finding an unacceptably high level of aflatoxin. “We know which are the farms and collecting centres which have problems. Today, they are all isolated, and probably in a few days, these isolated cases will start producing again for the market”, declared Constantin.

However, the consumers do not know. The Minister will not reveal the name of the affected farms, so consumers and small producers remain in the dark, no knowing who “to thank” for this scandal. Many of the consumers find out only on this occasion, that our milk contains secret ingredients, tolerated by the authorities.

Several countries in the region have faced problems with tainted milk. In neighboring Serbia, the authorities simply increased the allowed level of aflatoxin, which may cause cancer, by 10 times, from 0.05 to 0.5 micrograms per kilogramme.

A cold shower for consumers and producers likewise

Speaking as a consumer, Dacian Cioloş stated that: “I grew up with milk coming from my grandparents cows. Every time I come home, I developed a ritual of buying fresh milk from nearby milk-distributing machines. I hope that in the future I could better identify Romanian milk on the market.”

The European Commissioner believes that Romania has reached the time to “create a Romanian brand, with a certification system, with simple and clear commitments for the producers, to be accomplished together with the Government, accompanied by a financial support system for promoting the products. This system can only work with the direct involvement of the producers in the control, realizing that the brand is theirs, not the states. If the consumers discover Romanian milk, meat, fruits and vegetables on the shelves of the markets, they have to know that they are looking at a safe and quality product – which are not only guaranteed by the state, but also by the producers, in their will to defend their work and prestige.”

There’s Something About Dairy – CAP, Exports and Global Milk Markets

It remains unclear how EU-member states with powerful dairy industries will take into account the interests of farming communities outside Europe. While the instruments of which the CAP is comprised focus on the primary production inside the EU, impacts are felt within countries, in Europe and further afield.  […]