Ahead of today’s vote on the pesticide ban, ARC2020 and friends were up bright and early to make it clear who they were supporting: Europe’s bees. 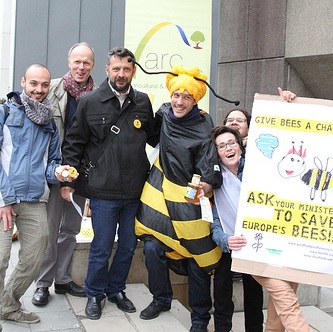 Today’s action marks the end of joint campaign being run by ARC2020, Slow Food and the European Beekeeping Coordination who have been urging citizens to contact their Agricultural Minister in the run up to the final vote on the neonicotinoid ban.

An initial vote in March on the proposal for a partial ban on three neonicotinoids – pesticides now proven to be harmful to bees – was inconclusive with several Member States not supporting the proposal from the European Commission.

Today however it was a different story, and a victoy for Europe’s bees and the environment. 15 EU Member States voted in favour of the ban: a continent-wide suspension of neonicotinoid pesticides. According to EU rules the Commission will now impose a two-year restriction on neonicotinoids. It will not be possible for Member States to opt out!

Ahead of EU pesticide ban vote on Monday, Minister Tsaftaris asked to support the bees […]