The Go M.A.D (Go Meet A Deputy) campaign was officially launched following the disappointing outcome of the CAP reform vote in the European Parliament’s Committee on Agriculture and Rural Development (COMAGRI) in January 2013. 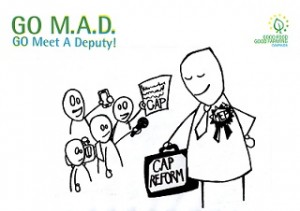 Go M.A.D called upon Europe’s citizens to directly interact with their local Members of the European Parliament (MEPs) to ask how they would vote during the plenary decision on the CAP reform in Strasbourg in March 2013.

We wanted to know which of the 754 MEPs would vote for a green, fair and local CAP…

Find out more about the action on our campaign website here.

The action was supported by 37 additional organisations across Europe. Over a period of two months, 71 meetings were held in 11 countries.

Cork 2.0 – where now for Rural Development?

What may turn out to be a very important EU Commission Rural Development event is being held in Cork, Ireland, this coming Monday. Oliver Moore explains why. […]

Could ‘Eco-Schemes’ be used to Support Organic Farming under CAP?

“Member States may decide to set up eco-schemes for agricultural practices such as the enhanced management of permanent pastures and landscape features, and organic farming” says the European Commission. What does this practically mean for support for organic farming? […]