Here on Arc2020 we’ve carried a recent series on livestock in the EU. Now, we’re adding to these with a guest post from Ireland’s Frank Armstrong. Below, Frank outlines his views on livestock and the case for cutting it out altogether. 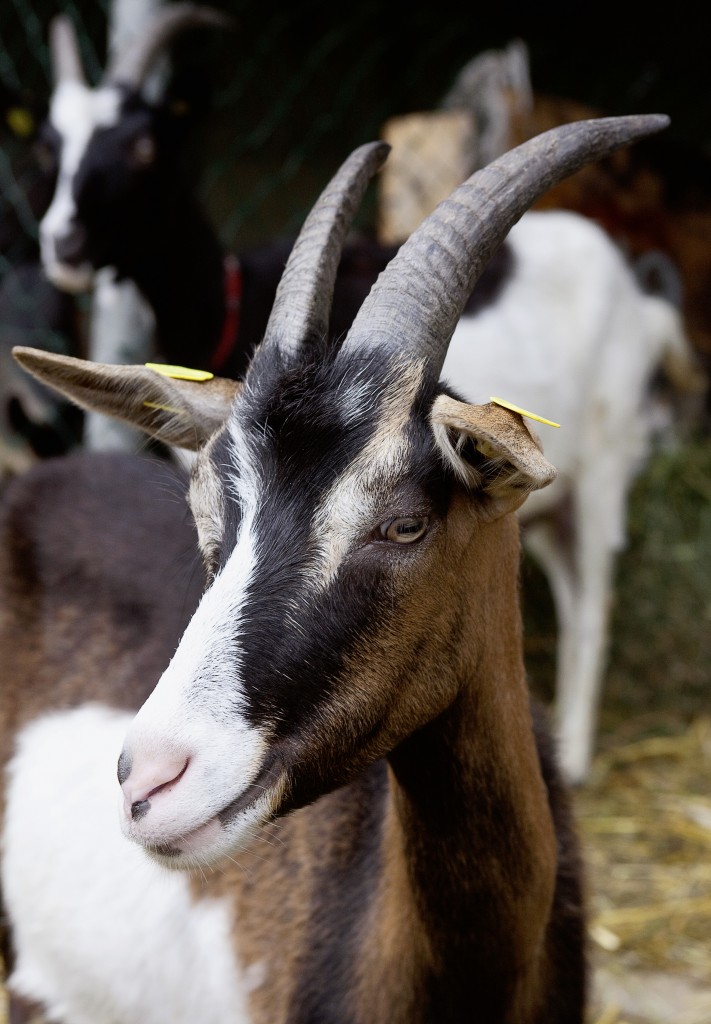 In the field of nutrition a debate appears to be raging over whether butter or margarine is healthier. But close scrutiny reveals no such argument. Advocates of a whole food, plant-based diet have long acknowledged that margarine, especially that containing trans-fats, mars human health. The butter versus margarine discussion is therefore one-sided and self-serving. It establishes a false dichotomy by indicating a choice between one or other ‘necessity’, and quelle surprise the animal product is superior. Within such reduced parameters the extensive evidence is ignored that a whole food, plant-based diet reduces morbidity and mortality.

Propagandists, academic and otherwise, for the multi-billion animal exploitation industries posit another false dichotomy: between emissions from grass-fed versus grain-fed cattle. Thus, Irish agricultural authorities make great play on how cattle here are predominantly, though not exclusively, grass-fed, resulting in lower emissions than other European countries for meat and dairy products. This argument is used by the Irish government to justify evading any reduction in agricultural emissions which account for 32% (EPA, 2013) of the country’s total emissions, the highest proportion for anywhere bar New Zealand. The objective of the Irish government is to increase production in line with the objectives of Harvest 2020 programme.

The challenge of squaring intensification with reduced emissions cannot be met, leading the Irish Minister for Agriculture, Simon Coveney (who unashamedly represents the interests of large farmers and producers) to argue: “In Germany there is a growing market for Irish beef. If it no longer imports beef from Ireland it will go to Argentina or Brazil. I can say with certainty that it would be negative in terms of emissions.”

This reductionist argument is that increasing the consumption of Irish animal products will reduce overall EU emissions. But this is another example of a false dichotomy: both Irish and Brazilian beef are carbon-intensive compared to healthier plant-based alternatives. Thus, a recent UN-backed report argued that Europeans should reduce their meat consumption by half for environmental and health reasons. Indicating there is ecologically-friendly meat successfully blurs that message, maintaining consumption at present levels.

It should also be stated that Ireland has not always been an exporter of cattle. Until the nineteenth century it had significant grain exports and despite the inequitable distribution of land Irish peasants grew sufficient food to sustain a rural population far larger than today’s. That was until the Great Famine 1845-1850 gave the opportunity to capitalist farmers (indigenous and non-indigenous) to shift to a low-employment agriculture of livestock commodity export, and the repeal of the Corn Laws in 1846 flooded the British market with cheap grain from the New World.

Reviving plant cultivation for direct human cultivation should be an objective of the Irish agricultural authorities as this could lead to increased employment compared to extensive pasture as well as increasing access to healthy foodstuffs: Ireland is set to become the European country with the highest rates of obesity by 2030 (WHO 2014).

Superficially it is possible to eat a small amount of meat sustainably. Vaclav Smil has calculated that by abandoning the feeding of grain to animals the world could comfortably accommodate a global output of 190 million tonnes of meat – two-thirds of current supply – if crop residues could be turned into animal feed and pasture were used more efficiently. In Smil’s view universal vegetarianism is not necessary or desirable: he says animals are just better at digesting some things than humans, notably grass and food waste. Anyone in the world could eat meat, if they wanted to, on Smil’s model, so long as individual consumption was kept at around 15-30 kg a year: roughly what the average Japanese person eats.

But similar to other European countries, average meat consumption in Ireland is 87.9 kg a year (The Guardian, June 5th 2013); reaching Smil’s sustainable levels would involve cutting down to somewhere between a sixth and a third of the meat currently consumed there (15 kg a year works out at just 41 grams a day) (Wilson, 2014). So, why reject this ‘Benign Extravagance’ as Simon Faerlie has termed it?

First, plant-based diets provide superior health outcomes compared to conventional diets. According to observational studies (incl. Appelby, Thorogood, Mann and Key, 1999) a vegetarian diet reduces morbidity and increases life expectancy. A recent study from the Longevity Institute at the University of South California provides strong evidence that a low protein diet will significantly diminish a person’s risk of cancer. The author of the study Valter Longo told The Guardian (2014): ‘People need to switch to a diet where only around nine or ten percent of their calories come from protein, and the ideal sources are plant-based’.

Clinical trials (Ornish, 1990) have also shown that the adoption of a whole food, plant-based diet can prevent and even reverse the progression of heart disease, the biggest killer in Western society.

Furthermore, maintaining the equilibrium of consumption that Smil envisages is impractical. The voracious appetite of many developing countries for meat indicates that once a society encounters it at low prices, in the absence of taboo or other cultural restraint, consumption will climb to unsustainable, Western, levels. This is observed in the Middle East where locally raised meat, especially mutton, is highly prized, but: ‘[T]he pressure generated by this demand is greater than any market or other sanctions which might control it … the ecological and economic consequences of the increase in livestock numbers are not recognized by farmers or consumers, the damage caused by the process is continuing (Allen, 1994 p.27)’.

Moreover, humanity does not need to maximize its available food resources: the origin of famines lies in entitlement as Amartyra Sen (1990) has persuasively argued. In fact we need to curtail food production as obesity reaches pandemic proportions, and waste less.

There may be arguments for not interfering with hunter-gatherer or traditional pastoral societies but these are a small proportion of humanity, over half of whom now live in cities, with this projected to increase to 70% by 2050 (WHO, 2010).

We live in a world where food resources must be shared. Already many Third World countries, especially in sub-Saharan Africa, import food commodities for survival, and meat consumption contributes to malnutrition as commodities are fed to animals. Developing countries can supply the Global North with sun-tolerant crops in return. A nuanced attitude to food miles might be developed where analysis of the environmental and human impact of cultivating crops is to the fore. Instructively, Oxfam argue that: ‘trade could help millions of poor farmers and workers in developing countries beat poverty, and change their lives for good (Oxfam, 2014).’

One insight into the question of how to create a dietary shift might lie in developing an understanding of the microorganisms that inhabit our digestive tracts: According to one hypothesis these bacteria control host appetites. The authors contend:

The choice of one sort of food over another is often determined by the pleasure given by the different foodstuffs available, while the amount consumed can be determined by feeling “full.” There is some evidence that bacteria may be able to modulate human reward systems based on dopaminergic activity and to modulate feelings of satiety based on the presence of peptide YY (PYY) (Norris, Molina and Gewirz, 2013)’.

This may explain why, after a lapse of time, cravings and desires for certain categories of nutrients decline as different microbiota colonise the gut.

Revealingly, Professor T. Colin Campbell indicates that low-level consumption of animal products (3-5%) does not diminish the benefits of the whole-food plant-based diet he recommends but argues: ‘When we go the whole way, our taste buds change and remain changed, as we begin to acquire new tastes that are much more compatible with our health’ (Campbell, 2013, p.11). This may be because: ‘diet rapidly and reproducibly alters the gut microbiome (David et al, 2014)’. Periodic deviation seems to make adherence difficult. This is the flaw of the so-called Flexitarian approach of eating ‘vegan’ until 6pm recommended by Mark Bittman and other ‘eat less meat’ approaches. The loss of cravings for previously cherished foodstuffs appears to be not just an effort of will but also the product of alterations in the bacterial composition in our digestive tracts. Thus, we do not crave or desire that which we are not accustomed to consuming. Over time, the most dedicated human carnivore can learn to forget.

Recognition of the health and environmental consequences of consuming meat and other animal products will alter consumption to some degree, but a widespread dietary shift would be very difficult to achieve even if the EU and the US were to cease subsidizing meat production. Arguably, only when the wider population recognizes the hurt and suffering that domesticated animals endure will we see significant change. Countries such as India and Japan have had long-standing taboos against the consumption of land-based animals and perhaps that kind of compassion is what policy-makers should focus on inculcating rather than easily distorted ideas such as health or environmental impact. It is quite easy for people to identify with the pain and suffering of animals.

It is also necessary that those who adopt plant-based diets are given adequate guidance on how to replace nutrients that feature in conventional diets. In present circumstances where so much of the food supply is refined rather than eaten in its whole form, and where so-called food desserts abound, meat may be necessary for maintaining health, at least in the short term. Thus, a prerequisite for the advance of plant-based nutrition is ready access to nutritious, whole foods, and a reversal of aspects of a Green Revolution which emphasised yields leading in many cases to nutritional impoverishment of crop varieties.

A complete change in the way we conceive of farming is required so that a dietetic revolution can occur that should lead to a significant reduction in agricultural emissions. A shift in the subsidy regime towards healthy (Oyebode et al, 2014), and low-carbon horticulture would be a highly desirable outcome. Longer-term reducing dependence on grains may be desirable with tree crops such as acorns, chestnuts and other nut varieties becoming more widely available. Ending the confinement and slaughter of animals might also yield more harmonious inter-human relations.

Frank Armstrong is a food historian, cook and dreamer based in Dublin, Ireland. He teaches an open access course in UCD on the Politics of Food, and can be found on twitter.

http://www.oxfam.org/en/campaigns/trade/about?utm_source=oxf.am&utm_medium=Zp3&utm_content=redirect (retrieved 11th of May, 2014)

Sample, Ian ‘Diets high in meat, eggs and dairy could be as harmful to health as smoking’, The Guardian 5 March, 2014.

The State of Food and Agriculture

Mega pig farm plan stirs up opposition in the UK

Still time to sign an online a petition with more than 28,000 signatures… […]

Excitement builds with just four weeks to go before the international summer camp against factory farming! […]