We’re excited to announce that Pierre-Alain Prévost will be on stage for the ‘Were Fed Up!’ demonstration this Saturday, January 18th, revving up the crowd and getting us all excited about what we’re doing and why we’re doing it.  As part of his fight for better food and better farming, he coordinates campaigns for the French organisation “Envie de Paysans“.  He shares a bit about his work on a recent campaign, ‘1000 Cows’, below. 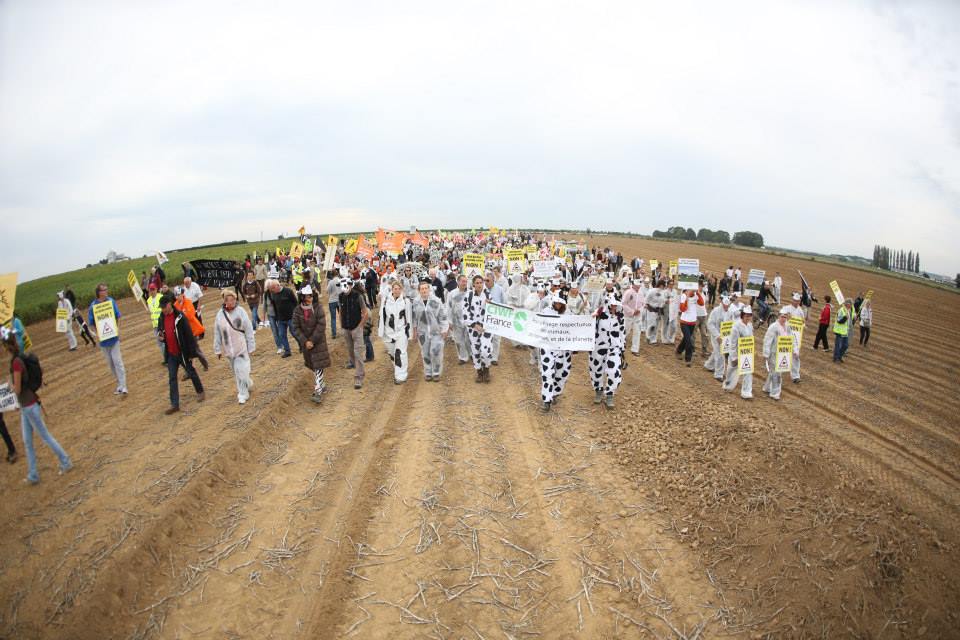 The story began 2 years ago when Michel Ramery – an industrial tycoon from the north of France – submitted a project to French authorities. His aim: to build the biggest farm in France, with 1000 milk cows plus 750 veals.  No grass, no promenade.  Each cow would have 8,5m² to eat as much soy and corn as possible in order to be milked 3 times a day and to produce more than 11,500L a day. Waow, what a performance! After 2 or 3 years of industrial exploitation, hop, ground beef full of medication for soon-to-be ill consumers. Even their extrements will be profitable as Ramery would proudly collect cattle dung to produce electricity with the biggest methanisor ever built in France. The beautiful mind of an entrepreneur.

This project has become the symbol of the industrialization of agriculture and how it destroys farms. How can the average milk producer stand a chance against a market price of 270€/T?  What about employment (with a model that needs only ¼ the staff), the environment (40T of liquid waste would spread in a natural, rainy area, close to one of France’s most beautiful bays), biodiversity, rural areas, and agriculture for countries in the South – all of this in exchange for bad quality milk. This project is the nightmare of every person or network working for sustainable food and farming.

Last but not least, to get the authorization to exploit his cattle, our main man needed to grab a huge amount of soil from the most fertile (and CAP subsidized!) area of France. Indeed he needs enough space to spread out his stuff. Would it be a problem for this powerful man? Of course not! He managed to grab 1300 ha of fertile soil instead of young famers and average sized farms. And he needs more. Always more…

It’s when the worse case happens that we can see the greatest example of human cooperation. Lead by a few citizens shocked by this insane project, the local population rebelled against Michel Ramey’s ambitions. Today, they are around 2,500 people fighting against this project locally (www.novissen.com). They’ve undertaken hundreds of actions (protests, media actions, postcards send to ministers, occupation of the site, legal actions in a court of law…) They moved heaven and earth to break it. They gave so much energy that they managed to drag with them the majority of the civil society network.

5 months ago on the 12th of September, the Confédération paysanne, the second largest farmer’s union in France, entered the game in a sensational way. When the fieldworks began a few weeks ago, 20 farmers entered the site during the night, deflated the tires of 30 work engines, pulled off hydraulic wires from a few of them to draw a 250mx25 tag, readable from the sky, saying “No to the 1000 milk cow factory”. A few hours later, 300 people invaded Michel Ramery’s headquarters, 2 hours from there. The action ended the day after when a few farmers got inside the biggest industrial breeding show in Rennes, France, and returned the “stolen wires” to the agricultural ministry, declaring: “we don’t want this kind of agriculture”.

Since then, it has become a national cause which set the question: “What kind of agriculture do we want in France?” There have been actions, this video clip , huge gatherings of “Angry cows” and more, which have managed to get ministers, MPs, press, networks, and citizens involved in this issue. This, just at the end of CAP reform and at a time when French MPs are working on an agriculture law for the future.

Incredible months of mobilization, great human cooperation, dreams of victory… And we’re pretty close to winning this struggle! Michel Ramery made a huge mistake as he built his farm differently than authorized by legal authorities, and after months of ministers declarations saying they’re against this project without the legal means to prevent it, it’s time to keep their words. After 2 years of struggle, it might be time to finally and definitively bury this project.

Stay tuned for the final blow!

Berlin saw a snippeldisco, or soup disco on the 17th of January. Here’s what happened. […]