Dominika Jarosz is a coordinator with Feeding the 5000, The Pig Idea and the Gleaning Netwrok, exciting campaigns working on the food waste scandal.  Tristram Stuart, founder of Feeding the 5000 will be joining us this Saturday in Berlin for the We Are Fed Up!’ demonstration, getting on stage to share some words that will get us all excited about why we are fighting for a better food system. Below, she explains what she does and why Feeding the 5000 is coming to Berlin. 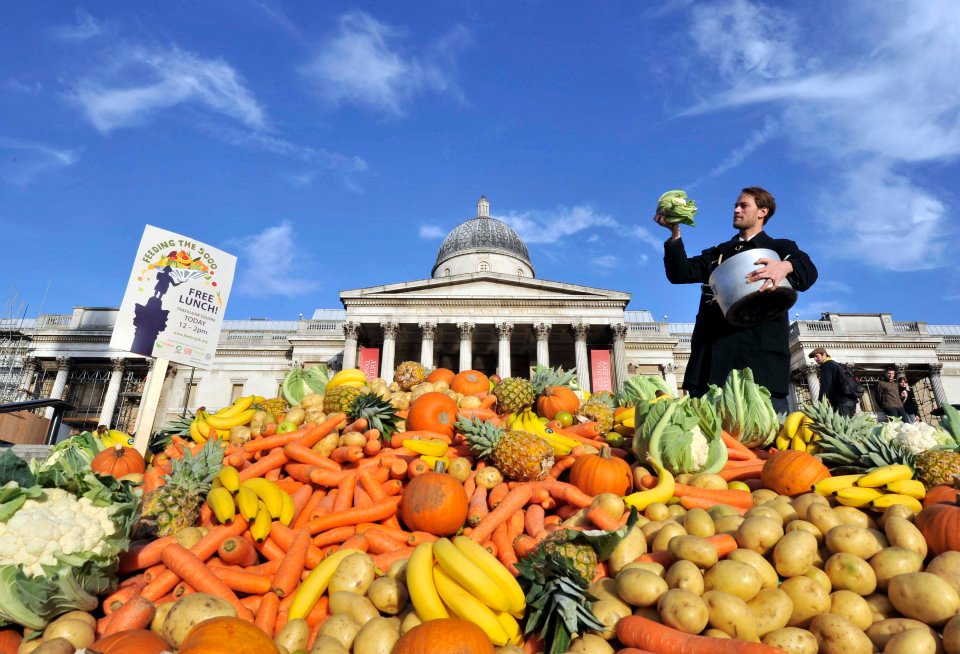 A third of the world’s food never gets eaten. There are many problems with the current food system, but food waste is one of the easiest to solve and would have an incredible, immediate effect. Landgrabbing, deforestation, biodiversity loss, increasing greenhouse gas emissions, pesticide and fertiliser use are all fuelled by growing food that ends up in bins. It is sheer madness. The dominant, flawed narrative is that we need to double food production to keep up with population growth, yet many countries in Europe have a food supply which is 150- 200% greater than that nutritional needs of their population. Changing this would reduce our impact on the environment and relieve pressure on ecosystems created by producing all the food that is never eaten.

This is why our campaign, Feeding the 5000 aims to empower and inspire the global community to enact positive solutions to the global issue of food waste. We work with governments, businesses and civil society at the international level to catalyse change in social attitudes and innovative solutions necessary to tackle food waste at the global scale.

Feeding the 5000 is also the name of the campaign’s flagship event where 5000 members of the public are given a delicious free lunch using only ingredients that otherwise would have been wasted. Events have taken place in cities including London, Paris, Amsterdam, Marseille and Nantes, all organised in partnership with organisations working to promote the many solutions to food waste. In each location we found shocking levels of food waste. In Nairobi, where we organised an event in partnership with UNEP’s Think. Eat. Save campaign, we exposed the impact of UK supermarket cosmetic standards on Kenyan farmers who had to waste up to 40% of their green bean crop.  As citizens we have the power to demand change from the food industry. Supermarkets are at the heart of the current food system in the West and have been a major driver in disconnecting shoppers from the realities and consequences of their food choices. We need to put pressure on them to change their practices, whilst at the same time supporting local farmers, producers and shops who provide genuine alternatives to the supermarket dominance and re-connect people with their food.

In addition to Feeding the 5000, we are behind two other campaigns aimed at solving the food waste scandal: the Gleaning Network UK and the Pig Idea. 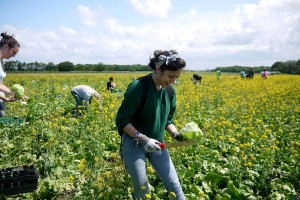 The Pig Idea: You are what your meat eats

People are increasingly aware about how their meat is raised, looking for local meat with high animal welfare standards. However, little thought is generally given to what animals themselves eat, despite the fact that 97% of global soy stocks are currently consumed by livestock, as is about two thirds of the world’s maize. The Pig Idea aims to reduce this rampant demand for crops to feed animals by bringing food waste back onto the menu for EU pigs, promoting the practice of using legally permissible food waste to feed pigs and eventually to lift the EU ban on feeding catering waste to pigs. This would reduce our dependency on imported cereal crops and keep food waste in the food chain. This is not a revolutionary idea- food waste has been used to feed pigs for thousands of years and in other parts of the world the practice of feeding food waste to pigs is actively encouraged. We decided to show how it can be done ourselves and in partnership with Stepney City Farm we reared eight pigs in London on food waste. This saved 21.5 tonnes of food from being thrown away and in turn this fed thousands of people on waste- fed pork at our spectacular Pig Idea Feast. The campaign has kick started a massive debate and has already made huge progress in bringing the pig industry some way towards our campaign aims. You can find out more about the campaign and sign the Pig Idea Pledge here

The Gleaning Network UK: The Arable Spring is rising

All across Europe, produce is being left unharvested in fields because it is the wrong shape or size. It is far better to get the food to those people who need it, and that is exactly what the Gleaning Network UK does, by saving some of the thousands of tonnes of fresh fruit and vegetables that are wasted on UK farms every year. We coordinate teams of volunteers, local farmers and food redistribution charities in order to salvage this fresh, nutritious food and direct it to those that need it most.

The Gleaning Network not only saves thousands of kilos of fresh food from going to waste, it also brings the issue to the attention of the global media and put pressure on governments and businesses to take action. The pressure is working- Tesco was the first UK supermarket to release third party audited food waste data and ugly fruit and vegetables became the fastest growing sector of the UK’s fresh produce market. This saved 300,000 tonnes of food that would otherwise have been wasted. Gleaning is already taking place in France and the Netherlands and we hope to see it take off across Europe.

Why are we coming to Berlin?

We are incredibly excited to come to Berlin and be a part of this vibrant and ever- growing movement which understands that the food system is key to tackling some of the most important environmental, social and economic issues that the world is facing and that as citizens, we need to put pressure on businesses and governments to take action.

We are especially looking forward to taking part in Friday’s Schnippel Disco. The first ever Schnippel Disco was organised in Berlin and sparked the worldwide Disco Soup revolution, a celebratory demonstration that the solutions to the food waste scandal is delicious. What better start to a weekend of inspiring action?

ARC2020 was invited to participate in the Action Forum at the 2nd Annual Global Soil Week, “Losing Ground?” […]