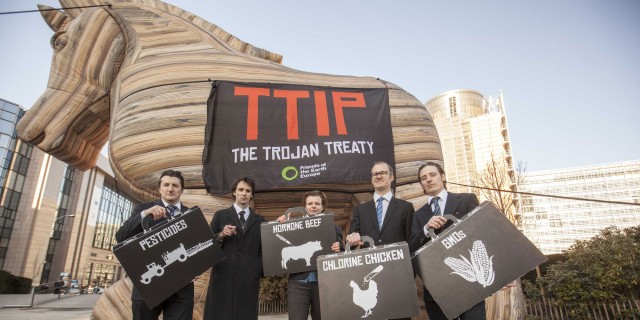 EU and US officials are meeting in Brussels this week to discuss the Transatlantic Trade and Investment Partnership (TTIP). This is the 8th round of negotiations between the USTR and the European Commission. This weeks negotiations will focus on the producing consolidated texts on all three of the initiative’s horizontal regulatory aspects: regulatory coherence, sanitary and phytosanitary (SPS) measures, and technical barriers to trade.

An analysis of the text published by the commission earlier this month by Friends of the Earth Europe, Institute for Agriculture and Trade Policy, Compassion in World Farming, Center for Food Safety and GRAIN indicates that the trade deal (TTIP) will threaten public health, consumer rights and animal welfare standards. Trade interests will be put before food safety in TTIP.

Analysis of the draft published by the EU raises a number of concerns about the impact on food safety and animal welfare. These include: the priority given to maximizing trade, the shift of power from national governments to a new trade committee, the threat to the ability of local authorities to set higher standards, the risk of minimal health and safety checks for novel foods (including GMOs, cloned animals, and nano materials), non-binding provisions for animal welfare, and the required adoption of international food standards established through the World Trade Organisation (WTO).

Olga Kikou from Compassion in World Farming expressed her concerns on what this will mean for animal welfare, “the references to an alignment of regulatory standards in the proposed text that deals with animal welfare chapter have reinforced claims that TTIP will be detrimental for animal welfare and will ultimately lead to further intensification in animal production. Although the text mentions animal welfare, the language is not binding and merely an empty phrase”

The analysis shows that the EU proposals would lead to a chilling effect and pressure on current regulatory regimes relating to genetically modified foods and the use of hormones and other chemicals in factory-farmed animals. This will be done by establishing a transatlantic trade committee that would in principle put a filter on future food safety and animal welfare rules.

Decisions on food safety would be shifted to this new trade committee and away from national and European decision-makers, while also reducing countries’ rights to inspect food and agricultural imports at the port of entry – a key measure used to safeguard public health. “People in many states are rebuilding their food systems from the ground up. The proposals in the SPS chapter could create new obstacles to cut that process short” Karen Hansen-Kuhn, Director of Internal Strategies at the Institute for Agriculture and Trade Policy, explained.

The analysis of the proposed text raises numerous important concerns about the ways in which TTIP could restrict efforts to build healthier, fairer and more sustainable food systems on both sides of the Atlantic. While the authors of the analysis welcome the publication of the draft proposal, it is  noted that many elements remain to be resolved, many of which are described in annexes to this text which have not been published. The US to follow the EU’s example in publishing its negotiating text, so there is a more complete picture of the potential impacts of TTIP on food systems in both the EU and US.

It is sometimes easier to find out what is being discussed in the Transatlantic Trade and Investment Partnership (TTIP) talks by following the US government coverage than waiting for European negotiators to testify in front of MEPs. The US House of Representatives Committee on Ways and Means grilled trade ambassador Michael Froman on April 3. The hearing is available online, but the 441MB file runs for nearly three hours, so here are some highlights. Representative Mike Thompson complained about protected geographic indicators that (0:55): “…the EU is making it very difficult… …some of the things they have done have created harmful trade barriers…” Responding, ambassador Froman sympathised with Thompson (2:05): “…we think our system of trade marks and common names works well, and we resistant to efforts to create further geographic indications.” Summing up, Froman added (2:40): “…it’s important that we establish a regime that works for us as well.” Click on the button to load the content from www.dailymotion.com. Load content TTIP­hearing­geographic­ 2 by anglophonie Texan Representative Lloyd Doggett asked if the dispute procedure (ISDS) for […]