Having won the biggest awards in Landscape Gardening including the Chelsea Flower Show, had a Hollywood movie made about her (Dare to be Wild), and been commissioned for some of the most striking and creative landscaping projects in Ireland, Mary Reynolds stopped being a landscape gardener. So what came next?

To book the Cloughjordan event which Mary is speaking at, on 2ND NOVEMBER, click here.

Oliver Moore: We Are the Ark idea has really taken the world by storm Mary. There are hundreds established in a very short while. Where did the idea come from?

Mary Reynolds: “It’s very simple. I was working at my drawing board, when I looked out onto the garden. A fox ran across, it was probably winter/spring last year, which isn’t that unusual. Then a couple of hares ran after him, and I thought, well that is unusual. And then a family of hedgehogs. Now, they are nocturnal, so I knew something was going on. I went for a wander and it turns out a digger had gone in across the road. It used to be an acre of gorse, bramble, hawthorn, blackthorn, but someone got planning and had cleaned out the whole field to replace it with a garden. I stood there in horror – and I realized that I’d done this myself so many times in my career. They had nowhere else to go. We’re taking away their habitats, the agricultural land is poisoned, old growth forest decimated, and now the only hope they have is abandoned land or gardens. It just reminded me of Noah’s Arc, all those animals going onto the boat, but in reverse. So I decided to give up my job. I have to dedicate myself to righting the wrong I’ve done.

ARK stands for Acts of Restorative Kindness to the earth. The aim is to empower people to restore health and sanctuary into as many places they can fit – it ranges from 1700 acres in US to window boxes.”

Oliver Moore: So it’s about creating some space for nature?

Mary Reynolds: “It become clear that all land not used for growing food, we should give it back! Unless kids are playing on the grass, just give it back, give it back. I wanted to write a book, but I don’t know we have the time, we’re almost out of time, I didn’t want to waste time publishing. So I decided to set up the We Are The Ark website instead.

Oliver Moore: Is it a form of rewilding?

Mary Reynolds: “It’s ARKing rather than formal rewilding. Bringing large predators back into system is rewilding, so this is where we are the top thing doing the ecosystem services that the large creatures normally do.

So people give as much land back as possible to nature. Plants are becoming extinct, they are conscious beings, I’ve never understood the lack of protection for them. The arc is about giving as much sanctuary as possible.”

Oliver Moore: What role do you see for farming in this?

Mary Reynolds: Farmers are not on board yet fully – they need such support from the policy point of view, to get to this point. Not everyone is like me – a single parent, willing to give up their job to protect nature. I don’t want to give them a hard time, its not easy. And some farmers do a great job. Farming needs change at policy level. I’d like to see more plant based diets, regenerative, organic farming,  rewilding the uplands, trying to give something back.

Oliver Moore: Are there any limits? I’ve seen invasive plants described as climate refugee plants – moving north as the weather changes. Shouldn’t we try to accommodate them?

Mary Reynolds: “We do ask people to remove non-native invasive plants. Sometimes I feel like a very tough parent, a tough Irish mammy, yes they may well be climate refugee plants, they are all conscious beings, and I feel very bad about it, but I feel we don’t have time to wait to see what happens with invasives. Insects are plant specific. If we allow something to take over, like Japanese knotweed, there’s nothing for insects to eat or to lay their eggs on. So we have to do the best we can – its like saying ‘you guys can’t come in! You don’t have manners, you don’t share, you don’t allow a native system to reestablish. So to give sanctuary, in this crisis, we have to get rid of them. That’s totally my own opinion.”

Mary Reynolds: “It’s case by case, it’s not a cookie cutter solution. This is a global movement. We’re dealing with people from all over the world, it’s not something we can prescribe. So are they adapting? Maybe, but the insects aren’t and they need support. If you don’t have insects you don’t have birds. Thistles, ragworth, nettles- we need them, for caterpillars for example. It’s a whole system, birds need this. But its about small parcels of land, and each of us being its guardian. We can do it all by hand, so we don’t encourage the use of chemicals. We can remove invasives and allow a native ecosystem to reestablish. So even if you are surrounded by Japanese knotweed, you’ll give some space in your space. We only need a small shift in consciousness, and this small group of people can become warriors, protecting the earth in a positive way – creating extensive arks. We also encourage people to put them on the map on the ARK website – we’re trying to connect them up. We’re also working with councils to create corridors between them.”

Oliver Moore: Are there any examples in Ireland you’d like to mention?

Mary Reynolds: “There’s four on the map in Thomastown, including a community garden called the Upper Paddock that has developed itself into an ARK, its gorgeous and really inspiring. People came together, now its a town park, but its also an ark. There are some heritage fruit trees, but otherwise, it’s about allowing what’s there to emerge.”

Oliver Moore: What happens when people get involved in ARKing – how does it impact them?

Mary Reynolds: “If we can tip that balance, with as many people as possible, to go from gardeners to guardians, it empowers people, once you empower then a little, there is no stopping them. Gardens become sanctuaries. It comes back almost overnight. It then gets more complete. People start to leave deadwood around, put in ponds, they start to get excited. Responsible for all these creatures you’re responsible for…a network of protectors. It’s a powerful movement, It’s very simple. Rewilding people might see it as pointless but it’s not, its consciousness shifting. We can’t keep waiting for governments to step up. They can’t. We have to work with each other, on the ground. It can spread via individual action. It’s one of the most powerful movements that has emerged. It could have huge scope for change.”

Mary Reynolds is the key conversationalist at the upcoming speakEATsy in Cloughjordan ecovillage on 2nd November. There she will be interviewed by Ella McSweeney (RTE, BBC the Guardian) and joined by poets Mel White, Clarinetist Deirdre O Leary and hosts Oliver Moore and Davie Philip. For bookings click here. Full poster below. 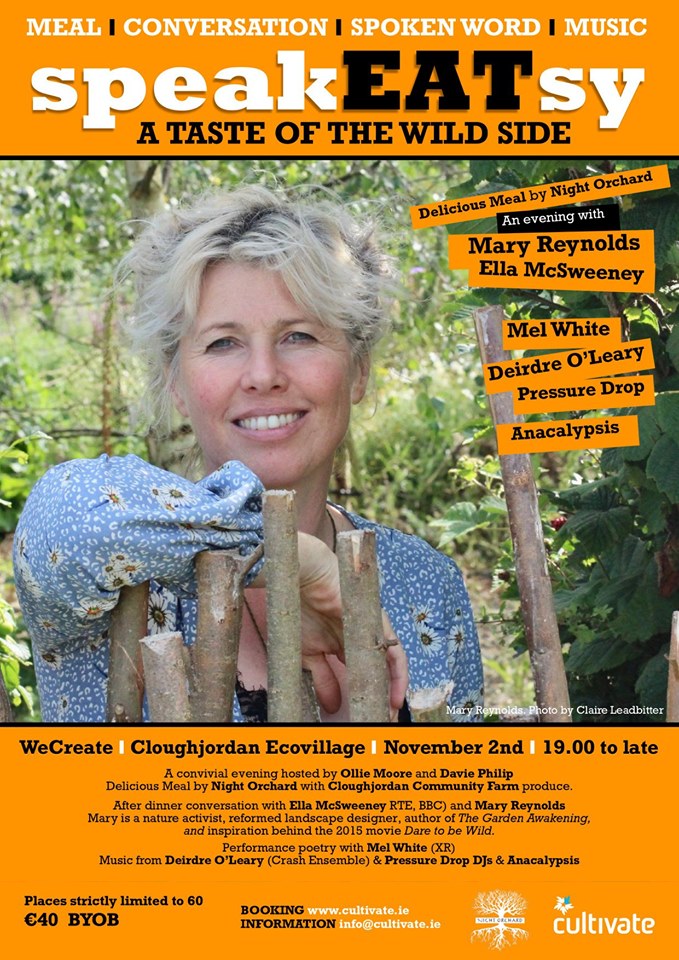 COP25 climate summit: Action must include divestment, decolonization and resistance

We are in the midst of a global environmental crisis and the sense of urgency becomes ever more evident with each additional story of climate disasters, ecological tipping points and climate records being shattered somewhere in the world. How deep do our adjustments really have to be? […]