An important part of the recent European Rural Sustainability Gathering in Karditsa, Greece, was diverse set of field trips into the region. Nine places were visited, in the agricultural, economic and social spheres. These showcased some of the rural development initiatives in the Karditsa region – and how they are connected via an ecosystem of collaboration. Much was learned by participants – here we present a snapshot of the day.

In Karditsa, Greece, a well developed, interconnected “ecosystem of collaboration” allows for the social economy to flourish. This integrates economic, social and cultural aspects into a framework, with many rural and farming initiatives in particular being supported.  Participants at the European Rural Sustainability Gathering (ERSG) 2017 had the opportunity to visit some of these while at the gathering. There were three places visited by each group, with three types of places within this. Each of Agricultural, Social and Economic categories were covered. Typically, this meant farmer cooperatives or processing units; social/cultural/educational initiatives and local economy/cooperation/networking initiatives.

In practice, the neat separation of these into three types belies the level of interconnectedness on display in Karditsa rural development. This is because what is referred to as the ecosystem of collaboration brings many aspects together, while also operating as a kind of network for rural betterment. These field trips were structured around the three pillars – of the ecosystem: ANKA (Development Agency of Karditsa), the Cooperative Bank, a range of social enterprises in agriculture and development/inclusion. 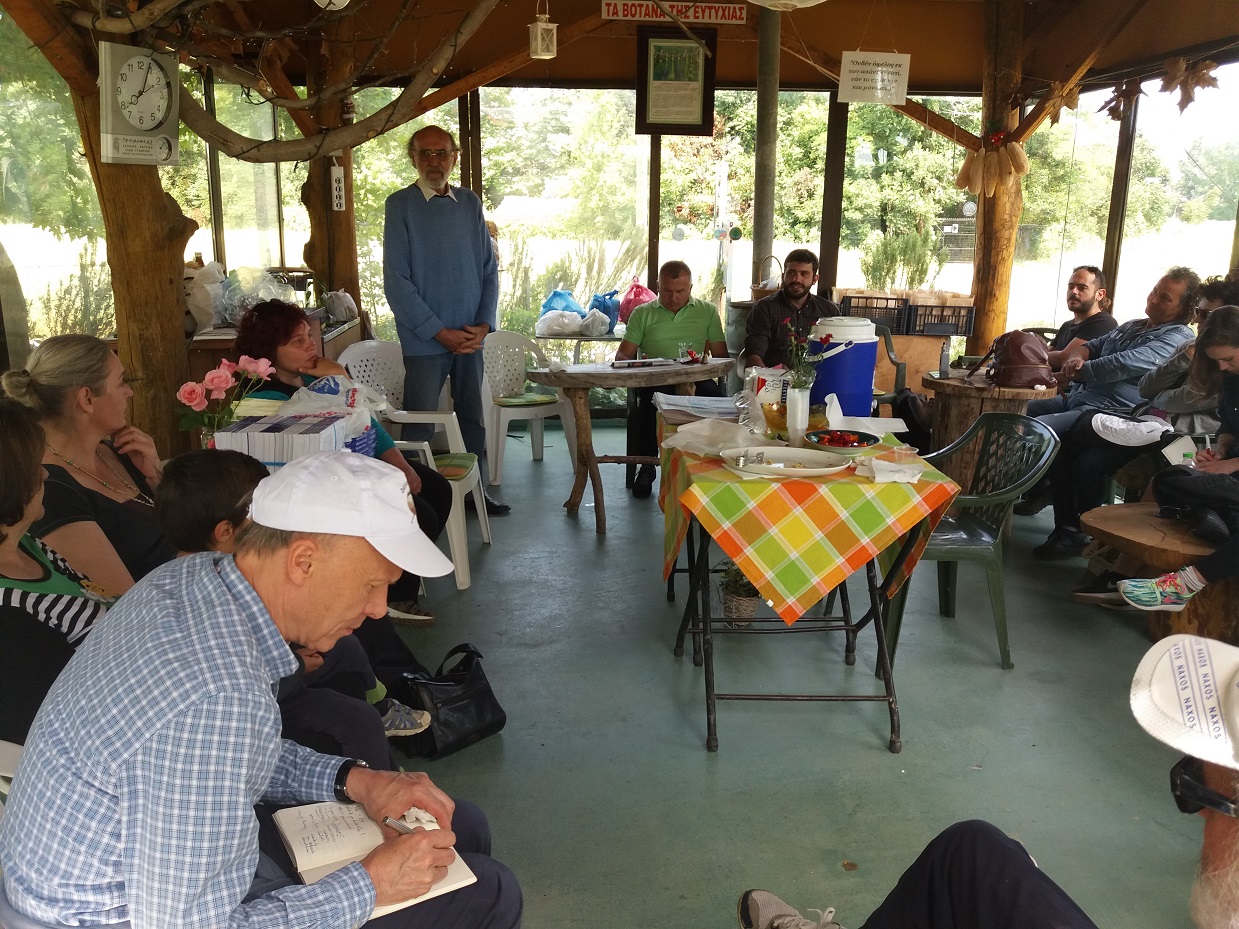 Technical support during the initial phase (pre-startup).
Organisation and support of the communication campaign (meetings in the villages, press releases, etc)
Hosting of the cooperative for  1-4 years, until the completion of the investment plan
Traditional incubator services (secretary, bookkeeping etc)
Investment Readiness Capacity Building (Business plan, Marketing plan etc)
Preparation and submission of grants requests
Networking with the Research Centers, Universities or Technological Institutes or specialists, depending on the needs of each social enterprise.

It works in conjunction with the Cooperative Bank of Karditsa, which was initially established as a credit union in 1994, becoming a bank in 1998. The bank is described as the healthiest in Greece – loans, deposits and memberships are all up since its founding.  It is a pioneer in social financing tools, with mentoring and microfinancing provided. Any Greek citizen can become member but only 30% can be from outside Karditsa. Participants heard that, with four branches opened, people trust the co-operative bank more than other banks.  The incubator, bank and local social enterprises work together as Pillars in the ecosystem of collaboration.  For many of the initiatives outlined below, both LEADER and the co-operative bank were involved in generating financial supports, within this Three Pillars structure.

For Agriculture, we saw examples of farmers coming together to access supports to value add in innovative enterprises. Superfoods, stevia and energy coops were encountered, as was a socially engaged organic farm (see above, more on this later). This displays forward thinking and innovation – rather than produce what’s always been produced, why not change to suit market and societal trends?

The Superfoods’ Cooperative has 113 members from 19 regions in Greece. It was established in 2012, and grows gogi berrys, blueberries and other nutritious berries. Moreover, funding was accessed to construct a processing unit, which allows them to develop products such as jams and dried berries.

Interestingly, they find that the “organic” and “sugar free” lines sell best – while some of their products are already full symbol organic, they are still in conversion to organic for others. Organic is also more labour intensive. The co-op has non-farmer members. The recession was tough initially – in the words of co-op President Kotsiopoulos Konstantinos “people could not afford potatoes never mind jam!” Capital controls due to austerity measures have also inhibited their early growth.

Now they work closely with supermarkets in product development, while they intend to diversify both their product lines and the factory itself – this will involve processing Stevia.

The Stevia co-op too found alternatives in face of crises. The Stevia farmer’s cooperative is the first unit in Greece that will produce steviol glycosides from the leaves of the plant stevia. A group of 13 local farmers were spurred on by a conference on the topic in 2012. Today there are 64 members of the cooperative, growing 40ha of the crop, with research support from the Technological Educational Institution Thessaly. The shares that one farmer can have from the cooperative are a maximum of  4 (3 voluntary shares and 1 obligatory that holds one vote). Members suggested that the secret of their success was that they didn’t know each other before getting together – new co-ops represent a fresh start.

The Energy co-operative is a civic co-operative established in 2010, with 350 members. Initially the idea was that it could help utilise the existing biomass in the area, from forestry and post harvest residues. Different types of biomass have been trialed.  The unit is already constructed and its inauguration is expected soon. They hope to service local markets’ renewable energy needs. The impact of the cooperative to the local economy and especially to the employment in mountain areas, through its cooperation with the forest cooperatives, is expected to be very significant.

Others wondered about the size and/or location of the factories  – building the biomass factory on highly productive land was concern for the planning authorities initially.  How connected are these factories are to useful infrastructure – other factories, goods and services? Will they reach capacity? Different products displayed different levels of market readiness. Some also questions the wisdom of focusing on niche products – is this a risk? How agile or nimble are these co-ops in the face of fickle, volatile and variable markets?

So while there was much to laud in these quite new farmer co-ops, visitors were also interested in how to develop deeper social, cultural and ecological engagement and impact.

The Women’s Centre was established in 1992 by Municipality of Karditsa. It is the oldest women’s support centre in Greece and the only one that operates under the control of the Local authorities. It organises national, regional, local and European projects aiming at promoting equal opportunities, fighting against discrimination and inequality. Its focus is on working, professional environments, family life, and on all-ages citizen education.

They pointed out that they are busier since the crises, with both unemployment and domestic violence increased. There are problems for women with unpaid rural and agricultural work, while women from minority groups do not avail of their services, despite real needs.

Roma Without Borders is an NGO working in Karditsa region, whose objective is to administrate, guarantee and protect Roma’ rights in education, employment, health and housing. Newly registered in 2017 and part of the Ecosystem of Karditsa, it has however been working informally for the past 15 years.

Greece has between 250 and 300,000 Roma people, while the Thessaly region itself has about 27,000. Their socio-economic situation is poor, while social inclusion is still very much a work in progress. A settlement of 1200 inhabitants exists 3km far from Karditsa and is the main focus of the NGO activity.

Their work in the settlement is very specific  – many Roma, especially women, rarely get to leave. Opportunities for work and education are limited, again especially for women. Men who typically engage is scrapping (working with recycled materials, typically metals) are finding their opportunities limited through regulation; women are married younger than is typical in Greece. Second Chance School has been established to help both grandparents and their grandchildren to learn together. The NGO also organises opportunities for socialisation outside of the settlement, including via cinema tickets, and with non-Roma, from outings to summer camps.

The NGO also wants to highlight the talents and positive elements of the Roma culture such as music instruments, crafts as a potential for a local museum and to transfer knowledge.

For most of the European participants, this exchange was an opportunity to open their minds on an unknown situation. The feeling is that it could be a good source of inspiration for other Greek Roma communities regions

Oikosfaira is both an organic farm and a socially embedded  initiative. There are allotments, a children’s garden, free seedings, and community gatherings every Thursday. There, people discuss environmental and social issues, organic agriculture and health. They are also growing a community – collective laughing is used as a tool in their gatherings – a form of laughter therapy/laughter yoga which is quite infectious. They have also organised an ecofestival for the last 16 years, and invite organic farmers from all over Greece to attend, including from Peliti, the seed saving NGO they work closely with.  ANKA were the first members of the legal entity that organises the festival.

Visitors found these initiatives fascinating. They again asked about the depth and participatory nature of the projects. Why is the overall boss of the women’s initiative a man, and why is this accepted as the norm? What is the role of the women’s centre – to bring families back together or to help women in unacceptable situations? How integrated into the NGO are the Roma themselves?

These and many other considerations kept people animated for the day, while feeding into the rest of the gathering.

Here we republish the introduction to ‘Food Sovereignty, Climate Action and Local Resilience’,  a pamphlet produced by the Green European Foundation with the support of Green Foundation Ireland and Cultivate. […]

Hannes Lorenzen spoke with Vassileios Bellis ahead of the European Rural Sustainability Gathering in Thessaly, Greece 17-21st May 2017. Bellis is General Director of the Development Agency of Karditsa. […]

How do farms pass on between the generations in a way that respects the needs of older and younger people? Share Conway and colleagues argue for an approach that allows older farmers to maintain and sustain normal day to day activity and behaviour on their farms in later life, whilst also ‘releasing the reins’ to allow for the necessary delegation of managerial responsibilities and ownership of the family farm to their successors. […]