Last Friday, 17th August, the Dutch and Austrian bike tours taking part as part of the Good Food March set off on their way to Brussels. This Saturday, 25th August, the Austrians will intercept the start of the German route in Munich, before travelling the remaining 900km together. 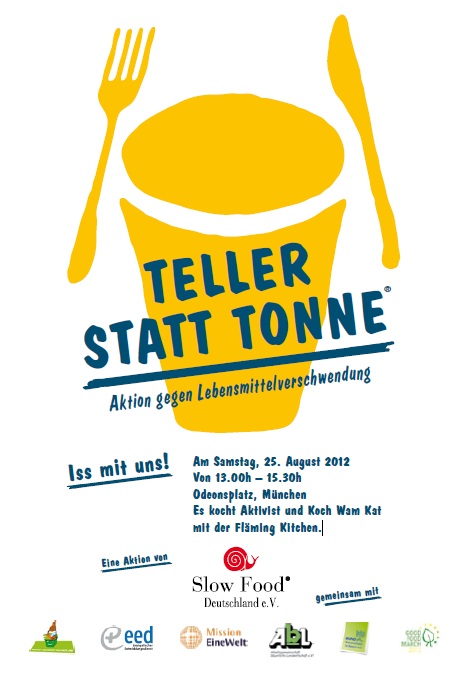 The start of the German route will be marked with a event in central Munich. A protest against food waste known as “Teller statt Tonne” (plate not waste) will start at 1pm at Odeonsplatz. At the event, vegetables that often go to waste due to them being the ‘wrong’ shape or size, will be publically chopped and prepared into a meal that will then be eaten at a long tables. Food will be prepared by the Dutch activist and chef: Wam Kat and his Fläming Kitchen. Wam will then accompany the bike tour all the way to Brussels, and is due to cook for the 100s of people expected to be spending the night in Jubel Park on the final night of the Good Food March – September 18th 2012.

The launch event in Munich, is being organised by Slow Food Germany together with Meine Landwirtschaft, Bund Naturschutz in Bayern/BUND, Evangelischen Entwicklungsdienst (EED), der Arbeitsgemeinschaft bäuerliche Landwirtschaft (AbL) and Mission EineWelt. It will be attended by those due to cycle some or all of the route to Brussels and members of the pubic, along with representatives from politics, local food producers and small farmers. Discussions will be held on the basic requirements for a sustainable European agricultural policy.

Nearly 40% of all manufactured foods doesn’t end up on people’s plates. Many fail already at the commercial compound due to visual or logistical criteria and standards: too small, too big, too crooked. Other food, although still edible often gets prematurely discarded and thrown into the rubbish. At the same time, especially in the Global South, many people are suffering and dying from hunger. The world stands in stark contrast to a sustainable agriculture and food policy.

For more information on Saturday’s event (in German) see:

Germany | Hitch Up the Wagon it’s Time to Transform Agriculture

Agricultural industry, species extinction, nutrition, climate: If we reform agriculture, we could achieve great things. Such reform should be a priority for the incoming “traffic-light” coalition government in Germany, but will it rise to the task? Tanja Busse has more.  […]