Today, August 17th, sees the first two Good Food March bike tours set off on their way to Brussels. They will make their way across Europe, passing through villages, cities and farms along the way, ending in Brussels on September 19th. Here they will be met by hundreds of other participants and marchers – all demanding a greener, fairer and more sustainable CAP! 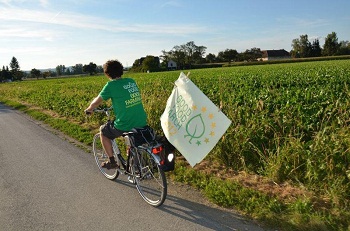 The Austrian route departed from Linz this morning and will now head towards Munich, where it will join the German bike tour which sets off on August 25th. You can find out more about the route on the official Austrian page for the Good Food March:

The Dutch route will take place in different stages, visiting farms in different regions of the Netherlands, mainly over the weekends between now and September 19th. It is is one of the routes heading to Brussels from the north of Europe. The other is scheduled to set off from Calais on 13th September. You can find out more about the Dutch route here:

The cyclists will travel between 30 and 50km a day, and will camp at farms along the way. If you want to take part, there is still time to do so. All you need is a bike, a puncture repair kit, a tent and a sleeping bag! Simply get in touch with your national contact and let them know if you want to join for a couple of days, a week, or the entire route!

The bikes tours are just one element of the Good Food March, adding to a programme of national events and online actions in what is hoped will be the biggest and broadest civil society action ever organised on the reform of the Common Agricultural Policy.  Find out more on the official website: http://www.goodfoodmarch.eu/home.html

Reaping what we sow: interview with Panagiotis Sainatoudis

A dream to save and freely distribute local seed varieties, a dream about freedom and democracy […]

This Saturday, an exciting launch event is planned in Munich as part of the Good Food March […]