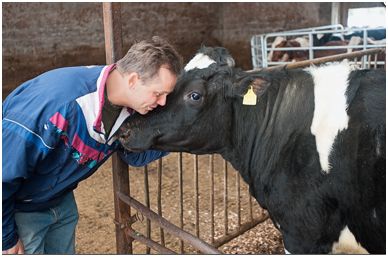 Our three parter on livestock reduction in the EU has generated quite a stir. Here we are giving our readers a chance to outline their positions on this hot topic.

But first, a brief recap. In part one, we gave you a detailed account of some exciting new research, lead authored by Henk Westhoek (Netherlands Environmental Assessment Agency) and Mark A. Sutton (Centre for Ecology & Hydrology, UK). The author’s study considered what might happen if Europe reduced its consumption of livestock derived products by 50%. The health and environmental benefits were significant, and quite linked to the level of reduction in livestock.

Then in part two, we put three questions to the authors, in an exclusive interview. These were: Cereals are not the answer (they postulated a shift from livestock to cereals); For meat and milk, why not prioritise different parts of Europe rather than a general reduction (they did not add detailed nuance to regions in Europe with different livestock production regimes) and Why no alternative methods? (small changes in agricultural practices were considered by the authors, not major changes). You can read their replies here.

Now its time for what you thought.

Bruce Scholten  Durham University (left) chipped in with this:

Andrzej Nowakowski (of Pesticide Action Network Europe) queried some of the assumptions regarding grasslands made in the models. He asked:

– In the high price scenario, the permanent grassland (although intensively used) being converted to arable represents a massive loss of carbon: is that C store accounted for in the model (as this will not decrease C emissions) and costed appropriately (e.g. weighted negatively)?

And prioritising, he pointed out that “in the end it is a model, but how do we shift diets and consumption and steer land use changes in holistically positive way?”

Hannes Lorenzen (adviser for the Greens/EFA group) also queried the parameters of the study.

“I think the study is quite a narrow approach to the GHG aspect of meat production, without taking a broader picture of what that means for long term sustainable farming and food systems. The vision of producing cereals for export and agrifuels on former grassland is in my view not an option, even if that would reduce soy imports.” He also considered the framing of this debate along the lines of the a sufficiency paradigm. Rebalancing plant and livestock production in a sufficiency paradigm, is part of the 3rd SCAR report. This report considers two models of production in what it describes as a “resource-constrained world”.

Here are those two paradigms, taken from the 3rd SCAR report.

The productivity narrative.  According to the productivity narrative, world population will increase to an estimated 9.2 billion people in 2050, while agricultural productivity has been slowing down over the last decades. Rising income levels in emerging countries will shift diets to include more protein rich food and will increase energy demand. At the same time, resource constraints and climate change severely limit the world’s capacity to expand food production. Hence, there is a serious threat that food demand will not be met in 2050, leading to more hunger and political instability Scientific advances have the potential to bring forward technologies that boost productivity whilst addressing resource scarcities and environmental problems. To achieve this, massive investments need to be made in R&D, in speeding up technology adoption by farmers and addressing barriers in rural infrastructure, trade barriers and access to markets.

The sufficiency narrative.  According to the sufficiency narrative, world population will increase to an estimated 9.2 billion people in 2050, which will lead to dramatic environmental problems as system Earth does not have the capacity to support expected rates of consumption. In addition, current food systems produce waste and over consumption leading to mass health problems. The destruction of important ecosystems will have dramatic feedback effects that undermine the foundations of our food systems, leading to more poverty and conflict. Scientific advances have the potential to bring forward technological solutions that are productive, reduce resource use and preserve biodiversity. However, to stay within the capacity of system Earth, demand increases need to be mitigated through behavioural change and structural changes in food systems and supply chains. Moreover, environmental externalities need to be internalised in markets through appropriate governance structures that also address the disruptive effect of unregulated trade.

The sufficiency paradigm is part of the process that led the CAP toward the EIP – European Innovation Partnership – which Arc2020.eu has been involved in promoting and helping to develop.

So there are certainly issues and contentions, and queries around emphasis. Its worth remembering, however, that this study was but one, albeit one with other accompanying research, as the authors pointed out in part two. Their scope was deliberately narrow, to consider what they felt to be a realistic, simple shift without radical rupture – a shift to cereals and energy crops, with significant but not seismic changes in diet or land use. And reduced, but, importantly, changed livestock production is a core part of many more agro-ecological approaches to food production, including the sufficiency narrative/paradigm above.

Where does your meat come from?

ARC2020 was involved in the Feeding Ourselves gathering in Ireland. This event focused on some important aspects to this idea – how do we better feed ourselves. So what are the A’s of better food systems? […]

The first farm of its kind in Scotland

Whitmuir Community Farm, a few miles south of the Scottish capital Edinburgh is selling itself to the local community. Literally. For a couple of years now, Whitmuir Community Benefit Society has been selling shares in the working organic farm, with a view to securing the future of the educational work that already goes on there. “Transferring the land from private ownership to community ownership not only protects the long term future of the farm, but also allows greater collaboration with the educational and science sectors than is currently possible and enables the development of accommodation and teaching facilities on site,” explains Pete Ritchie, director of Nourish Scotland, who is currently farming Whitmuir with his partner, Heather Anderson. The process of selling shares was launched in 2013, with the first share being bought for then five-year-old Maya by her family. The launch event was also attended by the Scottish Parliament’s Cabinet Secretary for Rural Affairs, Food and Environment, Richard Lochhead (pictured below, with Maya). There are now 14 shareholders under the age of 16 and the […]