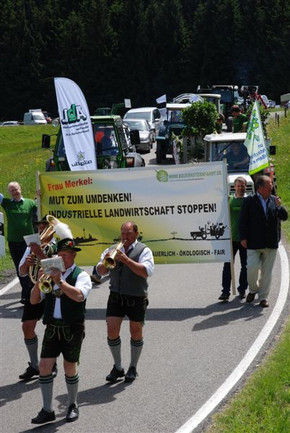 The German campaign „Meine Landwirtschaft – unsere Wahl“ (My agriculture – our choice): www.meine-landwirtschaft.de has organised an large, nation-wide rally through Germany culminating in a protest in front of the German chancellery.

Following the „Wir haben es satt“ rally on 22 January 2011 in Berlin, one of the largest public demonstration for a new agricultural policy in recent German history, farmers from all over Germany have now toured Germany on their tractors all the way to Berlin where they convened on June 9th, 2011 for a protest rally in front of the German chancellery. They are calling for a small-scale, fair, animal-friendly and ecological agriculture.

The routing of the rally is available here:
http://www.meine-landwirtschaft.de/sternfahrt/routen.html

The closing event „Angela, we need to talk“ including a farmers‘ banquet took place on June 9th from 10am to 12am in front of the German chancellery.

Take a look at the video appeal:
http://www.youtube.com/watch?v=mfxU28mHAdY

The farmers from all over Germany presented a list of demands to chancellor Merkel calling for a cultural change in farming. From the dominant unsustainable, resource-intensive, industrial-style farming and centralised food industry, so far favoured by EU farm policies, to sustainable farming and closer connections between farmers and consumers, providing high care for public health, environment and animal welfare.

The six main demands are:

Wolfgang Hees, is an organic farmer and representative of the German small-scale farmers association of the region of Baden-Württemberg. He attended and spoke at the Good Food Good Farming rally in Strasbourg on Monday. Below is what he said. […]

With CAP activities hotting up – in trilogue and at member state level – our friends in Good Food Good Farming have, with Birdlife Europe, organised an agri-food policy event for 17th February. The need for transformation, the science and evidence behind why and how CAP isn’t working, along with some practical suggestions for how to communicate and mobilise around CAP issues form the core elements of this exciting all-day event.  […]