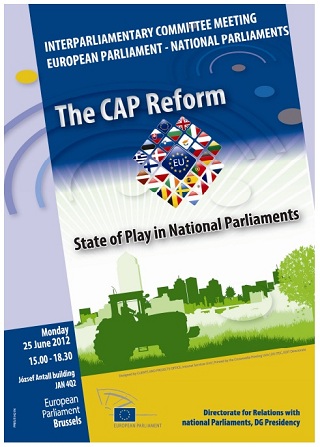 Following the entry into force of the Lisbon Treaty, 2013 is the first time that the Parliament exerts full co-decision powers with the Council with regard to the CAP.  This Interparliamentary Committee Meeting: European Parliament – national Parliaments will therefore form part of the new process, with national representatives to provide an input into the next legislative steps.

Ahead of the meeting,  a document  –  The CAP Reform : The State of Play in National Parliaments – has been published which outlines the position of all Member States: a very useful resource.

Following the meeting, a press release issued by the Parliament stated that both the national parliamentarians and the European Parliament Agriculture Committee had agreed that the new EU farm policy must have a decent budget to provide for healthy farming practices that deliver a secure supply of high-quality food to all EU citizens.

An action plan for olive oil

The European Parliament (EP) voted Wednesday to include what is called Indirect Land Use Change (ILUC) considerations in its biofuels targets. What effect will this have on the EU’s renewable energy, climate change and also on land use? This European Parliament vote means that the real climate impact, due to displacement of food production, will be taken into account in the EU’s biofuel targets and policies. A cap of 6% on land-based biofuels, including energy crops, has been adopted. According to Terhi Lehtonen environment advisor Greens/EFA group: “This would be the minimum necessary to take real measures to tackle the climate, food security and other social impacts due to displacement of food production that is caused by EU biofuels policy.” Lehtonen adds: “The EP vote also signalled to the markets that future investments should be on biofuels with low-ILUC risk and no food based fuels should be supported after 2020.” How did the vote go? See votewatch here Background Biofuels are liquid fuels made mostly from crops which can be mixed with fossil fuels to […]