Stéphane Le Foll, the new French farm minister, is capable of challenging ideas that have been the bedrock of European farming policy for the postwar decades. However, some things have gone unreported in English media coverage of French agriculture, as ever. Here is an English language analysis of a ministry web video shot when Le Foll addressed the World Meat Congress. There are no subtitles for this speech in French, but having worked as a former college lecturer, Le Foll’s delivery is clear as a bell. 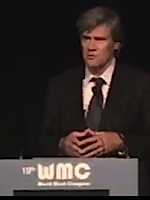 At the beginning of June, Le Foll greeted delegates to the World Meat Congress in Paris with two challenges: the familiar one of feeding a world with nine billion souls and more demanding environmental challenges we face. A serving French minister has never before challenged the idea that humanity can continue to consume animal protein on the current scale.

“That is what is at stake,” he warned. “We’ve heard speakers talking about how to feed a world population of nine billion and how we will have to change eating habits.” Le Foll is advocating nothing short of revolution to his audience.

“All the thoughts which you have should integrate into this debate the notion that livestock production also has a role in the environmental challenge we that we face now and in years to come. In this connection, through the CAP, Europe … carries the idea that livestock production plays an important role in the balance of both the territory and the environment in general.”

Livestock has a role to play in the wider picture in terms of the targets we set for biodiversity, in the overall picture of how we use land, he told WMC delegates. “You have then, in your debates, to think about two questions. The [first is the] question of food, the question of eating patterns and the place of meat in the world. The second is how to integrate the role of livestock production in resolving the environmental question.”

In measured tones, he reminded his audience: “Producing animal protein takes a lot of vegetable protein. This debate is yours. It’s for all of us [to discuss]. It means that we must come to understand eating patterns,” Le Foll warned.

“There you are, then. Those are, for me, the two challenges that you face and that you have to discuss. At the same time, I know that the world is opening up, that trade is developing and competition is building up against us.”

The former economics lecturer knows only too well just how the economy can distort the best intentions in policymaking. There is some disappointment among environmentalists that Le Foll has not radically changed the French position on the CAP yet, but the power and direct delivery of his arguments when urging coherent environmental standards is striking.

In a separate policy issue, he has faced criticism from industrial farmers for banning the Cruiser insecticide. His response is to remind his critics that neonicotinoid pesticides scramble the nervous systems of bees, causing a higher proportion of foraging bees to get lost and die.

On balance, Le Foll reckoned that agriculture needed pollinators more than pesticides. France has been, after all, the world’s second biggest user of crop treatments after the US, possibly in the absence of accurate usage or sales figures in China.

IATP’s Ben Lilliston exposes the vulnerability of big meat – from mass gassings and manure lagoons to climate change and human rights. Part of our #LivestockDebate Series. […]