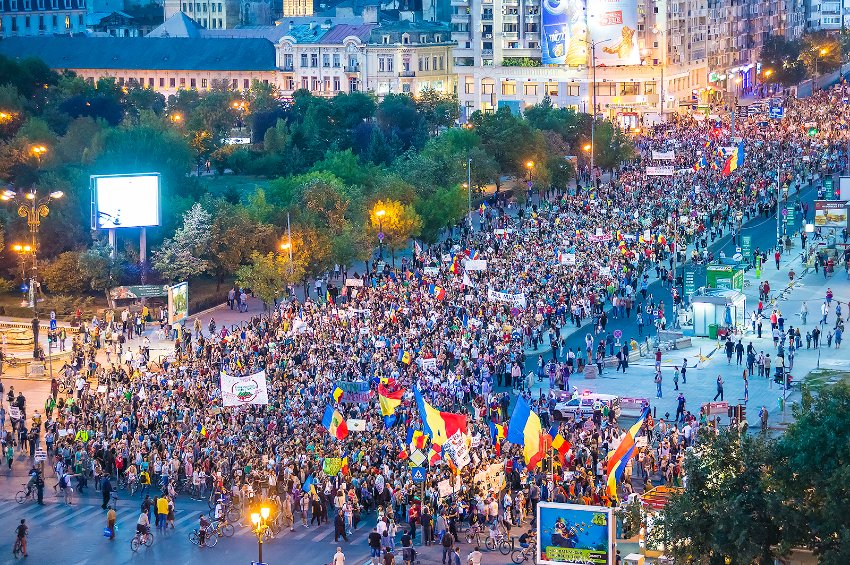 Remember the date. 3rd of June, 2014. This is the date when the peasant’s struggle, based in the village of Rosia, Montana obtained a stunning victory in the Romanian Parliament. This was final rejection of a mining law proposal, initiated by the Government, which would have given permit to the largest gold mining operation in Europe. The rejection comes as a result of tremendous public mobilization, in support of peasant rights who fight to protect their land in Romania. So what’s the background to this unusual and also quite incredible story?

When the corporation tries to make the legislation

The title of the rejected law proposal speaks for itself: ‘Law Proposal regarding certain measures related to the exploitation of gold and silver from Rosia Montana perimeter and the stimulation and facilitation of mining developments in Romania‘. One of the most contested stipulations of this proposal referred to a special procedure for expropriation of land owners who are ‘in the way’ of development. According to it, the Romanian state would have been represented by the private company (‘license owner’) during the expropriation procedure and when establishing the amount of compensation payment. In other words, the peasants from Rosia Montana were condemned by the Romanian Government to be expropriated in the name of a private gold mining project.

The gold mining project from Rosia Montana was initiated in 2000 and is basically owned by a Canadian company Gabriel Resources (tmx.com: GBU). According to Romania’s current legislation, this gold mine could never be approved. For over 14 years the Romanian authorities have repeatedly tried to break the law in the attempt of approving the gold mine, failing to represent the local community. In reaction, dozens of illegal administrative acts issued by relevant authorities at all decision making levels, have been successfully challenged by civil society organizations. Due to intense lobbying made by Gabriel Resources, in September, 2013, the Romanian Government initiated this special law proposal, violating basic human rights, the constitution and electoral promises.

This has given rise to the largest street protests ever organized for a social & environmental cause in Romania. Despite the embargo imposed by mainstream media, the protests rapidly spread in the country and abroad, also benefiting from the active involvement of Romanian emigrants from large European cities. The pressure from the streets came from a multifarious range of actors of varying political persuasions, coincided with a dramatic drop of Gabriel Resource’ shares value at the stock exchange (under 1CAD$/unit), and culminated with the recent vote in the Parliament. The Government, it seems,  just learned that people are more important and even more powerful than the gold.

The richness of Rosia Montana is not in the underground, but on the surface. Rosia Montana is the homeland for over 2500 peasants. Their main occupation is farming –  peasant farming. The vast majority of households have vegetable gardens, pigs and chickens in their backyard. From their vast orchards of plums, apples and pears, peasants produce gems and the famous Palinca brandy. The amazing biodiversity of the pasture land is perfect for herding animals : cows, sheep, goats, horses. A neighboring village hosts a regular animal fair, where peasants from Rosia Montana sell food and animals, which provides them a consistent income. A few beekeepers also contribute to the diversity of farming practices and products. Local wood craftsmen produce beautiful and resistant furniture for houses too. From the several hundreds of hectares of forests, locals collect delicious wild mushrooms and many varieties of berries. For generations, villagers have build their local economy by helping each other, exchanging services, products and seeds. Dozens of households opened their doors to agro-tourism, welcoming guests all around the year, who come from the entire country to learn about the beauty of Rosia Montana and most of all, to witness it’s story of resistance. Once a year, in August, Rosia Montana hosts a festival in honor of the anti-gold mine struggle, which brings thousands of participants.

Peasants are the most sustainable and innovative investors in Rosia Montana. They invest money, independently, in their land and their animals. Their long term vision for Rosia Montana’s development is by far more complex and strategic than any mining company or corrupted government.

Gabriel Resources’ purchase of land in Rosia Montana has been documented as a significant case of land grabbing and an infringement of the right to food.

14 years ago, threatened by the construction of the largest open cast gold mine in Europe, the villagers of Rosia Montana started an unprecedented mobilization, in defense of their families, farms, animals, land and water. They are not alone.

The resistance of peasants from Rosia Montana continues it’s journey of challenges. Two other law proposals, initiated this time by members of the Romanian Parliament and similar to one rejected, are awaiting to be voted by the same Parliament. According to ongoing investigations, the Rosia Montana mining project is the most notorious case of systemic corruption since the fall of communism. The up-coming presidential elections (December 2014) will bring new political promises regarding the fate of Rosia Montana. Ignoring the political drama, in the meantime, the peasants from Rosia work their land, building food sovereignty and keeping the Romanian mountains in place. And, thanks to massive mobilizations and long struggles it looks like they will continue to do so.

Does organic stand a fighting chance in Romania?

Despite demand in Western Europe, Romania is insignificant on the map of organic food consumers […]