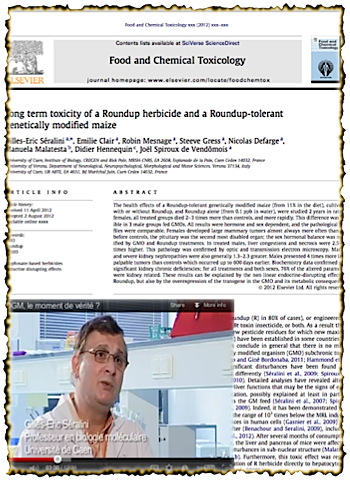 In the wake of Professor Gilles-Eric Séralini’s 2012 publication of a study demonstrating the toxicity of RoundUp at concentrations well within authorised limits, a former senior company scientist with Monsanto has appeared in a new seat on the board of publisher Reed Elsevier. A good account of the ‘heist‘ is given by Claire Robinson and Jonathan Latham in Independent Science News .

As Robinson and Latham recount, the scientific publishing industry may not be as objective as we would like to think. Since the arrival in February of former Monsanto researcher Richard Goodman as associate editor for biotechnology at Food and Chemical Toxicology, Séralini’s paper has been retracted by editor in chief Dr A Wallace Hayes.

According to the European Network of Scientists for Social and Environmental Responsibility (ENSSER) the strategic withdrawal of a thorn in Monsanto’s side comes with no clue as to who advised that retraction was a necessary course of retrospective action for a peer-reviewed publication. After all, peer reviewers had already validated the study. “It raises the suspicion,” ENSSER warns, “that the retraction is a favour to the interested industry, notably Monsanto.”

It is also noteworthy that since Goodman’s appointment, another paper critical of GM was withdrawn, but immediately published elsewhere, GM watch reports.

Séralini’s CRIIGEN team has countered with critiques of the retraction request, some of which were already published and unanswered in a later edition of the same journal. Part of their critique includes a challenge to the control group in the Monsanto publication used as a basis for its Roundup product approval. This used the same numbers of the same kind of rat, CRIIGEN declared, accusing Monsanto of double standards.

As if to demonstrate that the former Monsanto researcher had no axe to grind, Goodman published an extensive denial on the GMO Answers website. This is funded by the Council for Biotechnology Information, a front organisation for the biotech industry.

Goodman left Monsanto in 2007 and is now part of the senior management at AFB International, a “…leader in pet food palatability.” According to his LinkedIn profile, he has: “Unique ability to apply brand management skills to new industries, clarify business strategy and quickly focus organization on key priorities.” Just in case there was any doubt.

Meanwhile, some of the European Food Safety Authority’s new nominations are causing quite a stir. More on this soon.

If the EU isn’t careful, Romania may become one of the primary breeding grounds for GMOs. […]