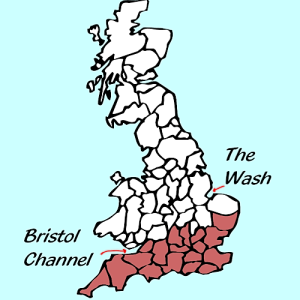 The UK is increasingly outsourcing its greenhouse gas emissions, a new report from the Royal Society shows. The land used to grow British food imports is now more than one fifth of the area of the UK, according to the study published earlier this month by the Royal Society journal Interface.

When ARC2020 superimposed the production data on a map of Britain, it covered an area south of a line between the Wash and the Bristol Channel.

As of 2008, the ten largest food imports alone occupy more than 55,000 square kilometres and are represented by the counties filled in with red on the map (above). These crops account for roughly 75% of the UK’s 2008 food imports, for a country which only produces just over half its own food.

The research team calculated the cropland occupation for 1987 and 2008, then analysed the changes. One of the most significant shifts  was a 50% rise in soya plantings around the  world to supply the UK livestock sector. In 2008, UK soya imports accounted for and occupied just over 15,000 square kilometres of farmland. This  is roughly equivalent to a corridor linking the port of Dover to Portsmouth, covering Kent, Sussex, Surrey and Hampshire, extending inland from the south coast as far as outer London.

A similar rate of growth was recorded for cocoa beans, which occupied 8720 square kilometres, or an area equivalent to most of Devon and Cornwall combined. The surface area of palm oil plantations supplying  the UK have doubled in the 20 years between 1987 and 2008, when it stood at 200,000 hectares.

The true impact of such post-imperial trading patterns has many aspects. First and foremost it removes land from food production for the populations living in the exporting regions. The carbon footprint of the UK’s imported crops is bigger than that of locally-grown foods, yet the climate change impact remains in the growing area, which also exports irrigation capacity with its  crops.

Another economic impact on regions growing export crops for industrial economies is that such crops support fewer rural jobs than the equivalent area under local food production.

Paradoxically, the economic visibility of local food is overshadowed by closely monitored and carefully tracked international trade statistics, which are taken as proof of a “result” without any serious questions being asked  of the sustainability of such economic activity.

As the authors’ succinctly conclude:

Total environmental impact is ultimately driven by consumption, yet governments mostly focus on low impact per unit of production within national boundaries and give less consideration to addressing consumption volumes and patterns. The effects of trade on the displacement of environmental impacts are mostly analysed in a global context for the sum of all consumption activities. Although such studies provide us valuable insights, analysing specific countries and specific activities such as food consumption will be needed for policymaking as most decisions are still made at a national level.

It is of course very clear which country will be considered the producer of these emissions. The producer will thus be responsible for reducing them post COP21 and the Paris Agreement.

UK Cooperative in fire sale of its farms

The UK’s food and farming sector is reeling with shock and disbelief as “Britain’s largest farmer”, The Cooperative, has put its farms up for sale. […]