Sustainable agriculture, forestry and fisheries in the bioeconomy, a challenge for Europe is the title of the latest foresight exercise of the European Union’s Standing Committee on Agricultural Research (SCAR). It was presented to some 400 stakeholders mainly from industry, research and institutions last week in Brussels.

Bioeconomy is a buzzword used in recent years to describe a global economy of biomass including all renewable resources processed into food, feed, bio-based products and bio-energy.

While the original concept of “knowledge based bioeconomy” was strongly associated with biotechnologies like genetic engineering it was later extended to virtually all products, by-products and services derived from agriculture, fisheries, aquaculture and forestry. At the same time, industry, science and research policies use the term bioeconomy to describe a market and technology-driven concept of converting biomass into a wide  spectrum of old and new products, promising innovation, economic growth and jobs. It is no surprise then that the concept attracts industrial and research actors over and above civil society or farming interests.

After SCAR had produced a sharp and groundbreaking foresight report on “Productivity and Sufficiency – Transition towards sustainable food consumption and production in a resource constrained world” in 2011, hopes were high that this new report would bring the bioeconomy hype down to earth. However, the new report could obviously not resist the temptation of using a new name rather than explaining the complex bio-realities. Its description of the bioeconomy reads like a list of facts and factoids; its text getting frequently lost in technical details, all the while strongly depending on data from a single technology advisory service company, whose head was one of the five core-authors.

Three scenarios on the future use of biomass did not really add too much insight into the new economy, except that high demand would rather push innovation of post-fossil energy and materials development while lower demand might delay breakthroughs but could reduce the pressure on ecological systems and natural resources. The authors seemed to be most comfortable with a middle of the road, third scenario.

The most interesting part of the exercise was no doubt five principles the report suggests:

Food First, Sustainable Yields, Cascading Approach, Circularity and Diversity. These were needed “for the bioeconomy to deliver on its goals of food security, sustainable resource management, reducing dependency on non-renewable resources, tackling climate change and creating jobs and maintaining competitiveness”. 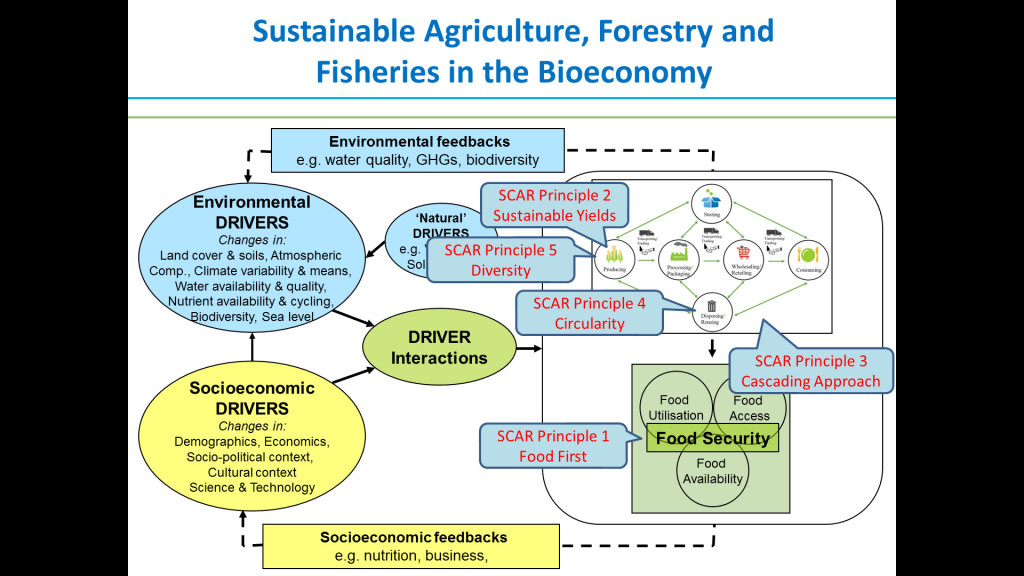 Food First gives priority to food and nutrition security by improving availability, access and utilization of healthy food for all. However, at the current trend as well as in the 2050 scenarios feed remains (2011: 7 billion tonnes of dry matter) by far the most important use of biomass, three to four times that of food (1,75 bio t odm).

Sustainable yields are classically defined as “the amount harvested should not be larger than regrowth” taking into account the needed regeneration of organic matter in the soil. Low renewal of stocks was especially critical for agriculture and fisheries while it was of less concern in the forestry sector.

Cascading approach “prescribes that biomass is used sequentially as often as possible as material and finally for energy”. So it is first used for the highest value, then for the second highest and so on. As this principle contradicts current biofuel chains as well as other early biomass industries, it is probably the most controversial, as immediate rebuttals from Copa-Cogeca on this topic also indicate.

Circularity, which is presented by the EU Commission as a future concept of economy, entails that there is no waste as materials should be returned to the biosphere without harm and that energy should be sourced from renewables.

Diversity was a final add-on of the authors to improve resilience, different scales and context-specificity, i.e. to counter the inherent plagues of industrialisiation as it converts farming, forestry and fisheries.

According to Prof. Eric Mathijs, who headed the team of five long-term and five short-term (and gender balancing) authors, the interconnection among these principles is crucial. It made no sense to call for sustainable yields alone as long as we continue to waste 30 % of the biomass. Governance of bioeconomy and better coordination of policies, he added could be dubbed a sixth principle, which was also addressed by a parallel assessment of the EU’s Joint Research Centre on Global Food Security 2030 and the consequences for a Common Food Systems Policy in the EU.

Mathijs, presenting the SCAR report to a stakeholder conference in Brussels, also introduced as research themes the “new paradigms” of ecological intensification, of landscape-level design of agroecosystems and the study of groups of organisms or polycultures rather than single bumper-plants of the future. He hailed the opportunities of the digital revolution on production and distribution and urged to investigate new business models and the socio-cultural dimensions of bioeconomy, including of course participation of stakeholders in the design as well as the use of the new knowledge and innovation system.

Fine words that were echoed with appreciation by most of the speakers from, science, business and policy. A single NGO representative amongst the many speakers, Benedikt Haerlin of ARC2020, depicted a rather different picture to his “fellow biomass representatives”, describing the devastating impact of large scale biogas-production in the vicinity of his home, in Western Pomerania. “Where do we find the concept of sufficiency from the previous SCAR report?”, he asked and complained that neither organic agriculture nor agroecology were mentioned in the entire report, not to speak of words like food sovereignty.

With respect to the scenarios Haerlin added: “Its the oil price stupid!” Present depression of fossil fuel prices, expected to last for some more time due to the geopolitical situation, were lowering the demand for bio-innovation substantially, also keeping food prices and farm earnings artificially low. “But beware of the next upward price amplitude and its impact”, he warned. Regional and local self-determination and diversity were probably the best options to increase resilience not least against the assaults of transnational input, trade and retail giants of bioeconomy.

The report and a video streaming of the entire conference can be found at the website of the European Commission.

‘Plant-based’ is the new ‘sustainable’. Marketed as the remedy to many of our crises, on closer inspection the label means little. And worse, rather than helping us to respect planetary boundaries, it embeds a belief that we can continue to consume because plants are a forever-giving source of food, fibre and fuel. In the first of a two-part series, Stuart Meikle debunks the reductionist virtues of ‘plant-based’ products. […]

40 scientific experts have come together today to release a paper on the role CAP plays in trying to make farming sustainable. Below we republish the summary of this paper, and provide a link to download the paper in full. Led by Guy Pe’er, and including our own Matteo Metta, the paper is critical of both the initial CAP proposal by the Commission from 2018, and more critical again of the positions taken by the Council and Parliament in October 2020. Important reading in the current trilogue context. […]

European attitudes to food and countryside