What impact will the Transatlantic Free Trade Agreement
(TTIP) have on the beekeeping sector?

Europe is a real problem for manufacturers of potentially dangerous products. While in the United States (US) class action law suits are brought by injured parties after disaster strikes, in Europe the application of the precautionary principle gets in the way of engaging in potentially dangerous business activities in the first place. In the United States the burden of proof lies with the victims. In Europe, the manufacturer must first demonstrate its products are safe. Of course, this is an oversimplification, but the approach “shoot first, ask questions later” is an important difference between the US and Europe. In recent years, the European beekeeping community has been in the unfortunate position to be at the center of two such contentious issues.

Let’s start with pesticides. At the moment Europe is trying to ensure that the twoyear partial ban on three neonicotinoids and Fipronil continues, and is extended to a comprehensive and permanent ban of insecticides harmful to bees. The manufacturers in question do not accept even the current temporary partial ban and have initiated legal action against the EU Commission at the European Court of Justice (ECJ). The manufacturers are claiming to seek to clarify the legal framework on the grounds that the active substances in question have been approved and are now banned without new scientific facts having been presented. According to the chemical industry, the decision making process was flawed and the approval body European Food Safety Authority (EFSA) is said to have conducted an inaccurate and incomplete review of the relevant data. The chemical industry has a fundamental problem with what they call a “flawed decision making process”. In May 2013 CropLife America sent a letter to the US Trade Representative, who is responsible for the free trade negotiations around TTIP and TPP. In the document, the neonicotinoid ban was cited as an example of the “abuse of the precautionary principle by the EU” and describing as “highly problematic” the “categorisation of chemicals as endocrine disruptors currently taking place” as “this runs counter to the science-based risk assessment approach used by the US Environmental Protection Agency”. The reason this message was addressed to the US Trade Representative was, that the corporations are seeking to attack the EU’s application of the precautionary principle at a time when the free trade agreement is still under negotiation by EU and the US. 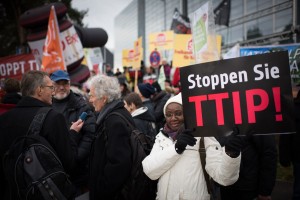 If this free trade agreement were to take effect prior to the ban on neonicotinoids running out, it would be much more difficult to extend the ban in time or scope for the current substances or in the future, strictly regulate new substances. This is exactly why a precautionary principle is needed in the first place. It does not stop there. The manufacturers are not only concerned about the products currently affected. These have been widely used for many years and the pests are developing a resistance to them anyway. Even if the ban were not to be made permanent, the active ingredients would eventually have to be replaced by new ones and the approval of future substances could be blocked by the updated approval process the EU regulatators at EFSA are proposing. Hence, the increase in intensity in the fight against stricter EFSA risk assessment guidelines and against the consequent application application of the precautionary principle. The goal on the part of the chemical industry is to use the US side to override both of these requirements by means of the TTIP negotiations.
Whether in fact the EU Commission vigorously defends the European standards in
the negotiations is another matter as the negotiations take place behind closed doors. From the honeybees’ perspective and based on past performance, the European Commission has not always proved trustworthy. The very same Commission that swore blind to its citizens that the EU’s high consumer protection standards would not be compromised has just turned around and, in an extremely zealous effort, undermined the ECJ’s judgement on the labelling of honey exposed to genetically modified organisms (GMO). At the time of the vote on the Commission’s proposal to amend the Honey Regulation Mathias Groote (Social Democrats) was the chairman of the responsible body in the European Parliament, the Committee on Environment. Just a few months ago during a public gathering at the Bavarian Parliament Groote commented that the dubious actions were in his opinion “a rather hurried obedience” to appease the Americans as one less issue to be dealt with during the TTIP negotiations. 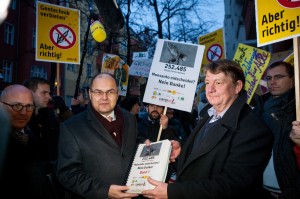 Just like EU’s the precautionary principle, the EU’s GMO legislation is a thorn in the side of these multinational corporations. On the road to the free trade agreement they want to pave the way for a Europe without obstacles to GMO cultivation. It’s important to pause here and reflect that Europe’s current GMO legislation was not a result of a democratic decision-making process. Unlike in Switzerland, there was never a referendum held on the topic. In 1998 the EU placed a moratorium on GMOs as the majority of its citizens, then as now, rejected the cultivation of GM crops. Following a complaint brought by the US, Canada and Argentina before the World Trade Organization’s (WTO) Arbitration Tribrunal, the EU’s moratorium was lifted in 2003 which opened the door to the controversial genetically modified crops. Even then, argumentation along the lines of the “rules of free trade and its associated legal system” were used to circumvent both democratic decisions and democratically legitimised national jurisdictions. In order to make agro-genetic engineering an easier sell to its citizens, the Commission promised freedom of choice, co-existence and zero-tolerance for non-approved GMOs. But only a few months later, Brussels was trying to figure out how to get around its promise so the GMO industry would not have to worry about any restrictions as a result of coexistence measures designed to preserve beekeepers’ ability to produce and thus allow consumers to choose GMO-free honey. The farcical attempts to get around living up to clear promises given by the commission came to an abrupt end in 2011 when the the ECJ reaffirmed the rights of beekeepers and their customers. This decision came at the most inconvenient time for the TTIP negotiations already underway. The Commission was forced to show it’s true colors. In order to protect the interests of the GMO industry the bureaucrats discovered a new magical ability of honey bees, which even the most devout beekeepers were unaware of. According to the new Honey Directive pushed through by the Commission, consumers are now to believe that honeybees are capable of transforming genetically modified pollen by virtue of translocating it into their honey into a natural product, which does not have to be labeled at any level. For us beekeepers these pesticide and genetic engineering examples show just how precarious such democracy-free agreements can be on our hard won gains, and for the future protection of our honeybees. Many of the disputed provisions are also included in a similar free trade agreement with Canada, the Comprehensive and Economic Trade Agreement (CETA) which is soon to enter the ratification process. Our fellow citizens understand and are justified in their lack of faith in the Commission to negotiate at TTIP. One only has to consider how the beekeepers have been treated these past ten years and the current genetic engineering fiasco. We therefore support, the European citizens’ initiative against TTIP and CETA.

Even when analysing bee deaths, politics is interfering with reality once again. Myrto Pispini exposes what’s left out & who’s sneaking in […]

A team of researchers in France have shown that is it possible to reduce pesticide use on most French arable farms without impacting on either yield or profitability. […]

Despite mounting scientific evidence, UK authorities have made an exemption for the bee killing pesticide. Peter Crosskey reports […]