This year’s  “Wir haben es satt!” (We are fed up) march surpassed even last year’s record attendance, with 50,000 people marching through the streets of Berlin. Farmers and beekeepers, tractors and stiltwalkers, samba bands and chanting citizens of all ages made their colourful way from Potsdamer Platz to the Angela Merkel’s chancellery. Their aim? To say no to a broken industrialised globalised food system and yes to an alternative.

TTIP, GM and Factory Farming were the key issues which brought people out onto the streets this year. Indeed TTIP, as a relatively recent concern on the horizon, mobilized a significant number of the extra 20,000 in attendance at this year’s event, judging by the banners on display.

80 tractors led the march, which  received extensive coverage on German national TV, in the press and on line nationally and internationally. “The EU-USA trade agreement TTIP only serves global concerns, and will take away the means of existence from many farms here and across the world,” said one of the protest’s organizers Jochen Fritz.

He also pointed out that over 3/4 of German pig farmers have been put out of business in just the last 15 years, as meg-sized farms have increasingly taken over the market. He called for more regionalised markets for agri-food products.

The momentum against TTIP in recent months has been especially noteworthy. Indeed the consultation on TTIP organised by the Commission saw an incredible 97% opposed to TTIP or ISDS.

Arc2020 took a colourful and noisy crew onto the stage, including Greek Slow Food activist Pavlos Georgiadis, Food Waste campaigner Tristram Stuart, a food sovereignty delegation from Syria, member of Friends of the Earth Europe and many more.

Standing in front of the Arc2020 banner,  BUND (Friends of the Earth Germany)’s Hubert Weiger, pointed out that these protests were having an effect. “Thanks to some 250 citizens’ initiatives across the country, more than 100 giant stalls have not been built” he said.

The demonstration, now in its fifth year, has really started to challenge Green Week for profile in Germany. Green week includes the largest gathering of agriculture ministers in the world at a Global Forum for Food and Agriculture.

The march was proceeded by the largest ever Berlin Schnippel Disko, where hundreds gather to have a party while making over a tonne of waste vegetables into a soup for after the demo. And this soup is used for the Soup and Talk event in Heinrick Boell foundation building. There, hundreds listened to over two dozen presentations from food activists around the world. This included Arc2020’s Oliver Moore and smauel Feret , who did a joint presentation on Arc2020’s CAP and Agroecology project.

More from around the world:

‘We Are Fed Up’: Annual Berlin march attracts tens of thousands of people (VIDEO) Euronews 17.01.2015 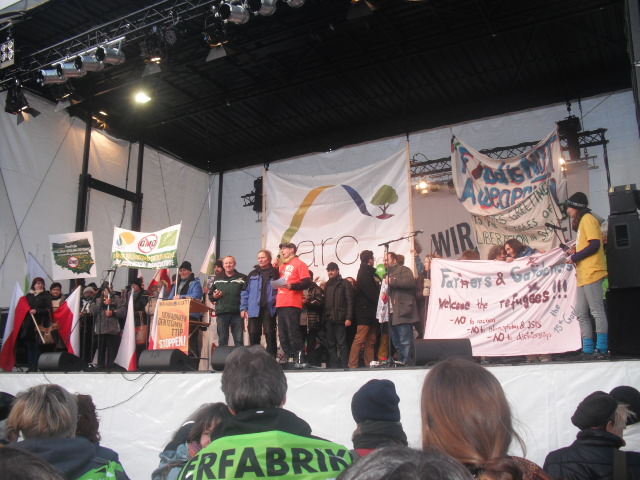 Below, Oliver Moore of Arc2020 outlines the issues behind the protest in a feature originally published in part on Euractiv last week.

The We Are Fed Up! event involves citizens gathering to express their dissatisfaction with a globalised, industrialised model of farming, one where people and the environment come second to the interests of big business.

If this sounds all too familiar, that’s because it is: agri-food in the EU has not been fit for purpose for some time.

The evidence is everywhere. European agriculture is expected to reduce its Green House Gas Emissions by a whopping 1% between now and 2020 under a business-as-usual scenario. In any case, agri-food is off the hook, much to the conventional sector’s delight. Biodiversity rates are still nose-diving – Europe has 25% fewer farmland birds – that’s hundreds of millions fewer – than in 1990. A huge area in the Baltic Sea, sometimes as big as Germany itself,  is stubbornly (pg 19) covered in a polluting algal bloom, thanks in large part to the nitrogen and phosphorus run off from industrial farming in the dozen countries that surround it. 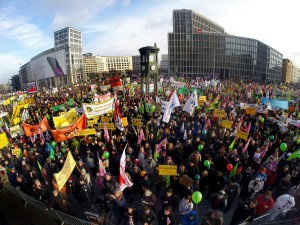 The CAP – Common Agricultural Policy – is the great enabler for all of this. The citizens of Europe were promised a CAP reform, but got in large part a CAP that fits just like the previous one. Indeed, we got a CAP-itulation when compared to the proposed Ciolos reform of 2011.

Some things even got worse in this so-called reform process. For example Pillar one – direct payments for primary production – received an even greater proportion of the overall available cash than in the previous funding period. So Pillar two, where agri-environmental schemes and rural development initiatives are supported – has an even smaller proportion of the overall spend from now to 2020. Biodiversity? Not likely to benefit, according to a large pan-European study last year of CAP’s biodiversity implications.

While We are Fed Up is contextualised by the fact that CAP priorities and spending do not adequately represent the wishes of European citizens, the event has a distinctly German feel, in terms of priorities.

Factory Farming, GM and TTIP have been prioritised as areas of concern this year by organisers Meine Landwirtschaft (“My agriculture” – an alliance of more than 50 NGOs).

And there is cause for concern. That Baltic pollution mentioned above? Too much of that comes from specialised industrialised pig units. And despite ostensibly better animal welfare rules, realities often don’t change on the ground. Compassion in World Farming and Eurogroup for Animals’ 2012 inspections of 45 large factory farms revealed a stunning 44 of them to be in breach of the EU animal welfare directives.

A massive public mobilisation against potential EU US trade agreement, TTIP, including well over one million signatures to a petition declared inadmissible by the Commission, has led to concessions unthinkable just 12 months ago. Greater transparency has been extracted and talk of the removal of ISDS – Investor State Dispute Settlements – is now front and centre of the debate. People are no longer bought off by loose talk of supposed jobs and growth; instead citizens are concerned about a race to the bottom in standards on both sides of the Atlantic: for example 82 currently banned pesticides may become available to EU farmers if corporate trade groups get their way.

This mixed bag of negatives also signposts a cornucopia of possible positives. And these positives can be condensed down into two things: sufficiency and agroecology.

There is another way, as the 3rd SCAR report points out – a sufficiency paradigm. This involves taking a range of relevant, realistic factors into account – such as resource availability, socio-environmental needs and impacts – when deciding how to transition towards a fit-for-purpose food system, one that judiciously produces enough, rather than overproducing unsustainably with significant waste. This thinking is simply not part of mainstream Green Week thinking, as evidenced by the production-at-all-costs orientated approach on display at the Global Forum for Food and Agriculture.

And helping develop agroecological Communities of Practice, as we in Arc2020 are doing, is another way too. This is where experts, farmers and citizens come together to help make a food system fit for purpose. This involves environmentally sound inputs and processes and people friendly practices, like shorter supply chains based on respect and solidarity.

And don’t forget Arc2020 are organising a conference in Brussels in February (register here) to drive better farming and food agenda, towards a common agri-food policy that’s fit for purpose.

‘We are fed up with agro industry!’ Berlin Demonstration

Saturday 21st January sees another ‘Wir haben es satt!’ demonstration in Berlin. The negative impacts of the corporate control of agriculture – loss of farmers, loss of biodiversity, pollution, hunger, climate change and many more considerations show that agro industry is failing – We are fed up! […]

Did you know it is possible to be a small scale gardener before breakfast and a destroyer of small scale production in work? Meet Traian Basescu. […]