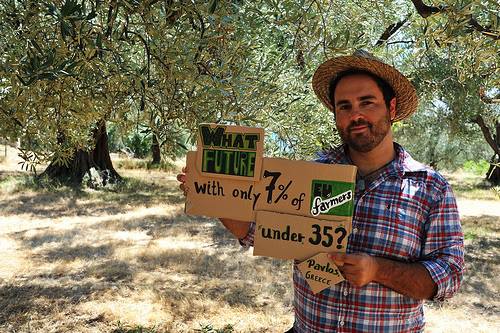 We seem to be trapped in a society in which consumers want to pay less for their food, while farmers want to produce bigger amounts, more efficiently, eg. more specialized. Of course, it is often very difficult for them to operate outside a system that is based on industrial production chains, monocultures, chemicals on the field and intensive agriculture. At the same time, although more and more people recognize that the way food is produced and consumed is not right, it is very difficult to change their consumption habits.

Today, more than ever before, we need to engage in a serious dialogue about the future we want. It is necessary that this process extends beyond national borders and talks prudently about our common challenges. Beyond polarities, this dialogue should consider the complexity and diversity that characterize food and rural development. 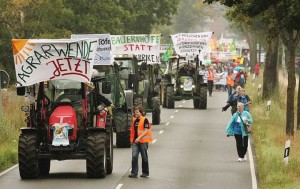 A few weeks ago, I joined the big demonstration and action camp in Wietze, Germany, outside Europe’s largest chicken slaughterhouse. I participated in several discussions, feeding into the dialogue with my experiences as a young farmer, entrepreneur and researcher from Greece, a country that came into the spotlight of Europe’s largest post-war economic crisis. I travelled to Germany to join my voice with all those that think that “we’ve had enough” with industrial farming.

With its large walls, high security, and cameras, the big factory looked more like a nuclear plant, or an army camp. The sight and the size of it evoked several emotions and a peculiar sense that when walls and cameras must protect the places where our food is produced, then we have a problem with our democracy. It is exactly the same feeling that I get when I see the unrest in the streets of Athens.

When riot police must protect a parliament, then we have a problem with our democracy. And that is, in my opinion, our common crisis, regardless of whether I am Greek or German. For that exact reason I travelled to Germany, so I can join my voice with the demos and thus help create more democracy.

In Greece, over the last two years we have had an EU-led “task force” which goes around from ministry to ministry, and one can say that we Greeks have lost control of who decides about our future. It seems to me that the same people who build these slaughterhouses are the ones responsible for the children going hungry at school, and hospitals closing in Greece. And I am asking you: is this the Europe we want? What future do we want for Europe? What future do our politicians dream of, with only 7% of Europe’s farmers under 35 years old and our countryside dying?

With views to the federal elections in a few days in Germany, these are the questions that I brought with me from my crisis-stricken country. And these are precisely the questions we should be asking to our politicians, until they finally start responding to the challenge in a way that works for the many, and not the few.

Jordan Treakle tells us about the 2nd UN FAO Agroecology Symposium, held in Rome April 3rd-5th. What vision for agroecology was presented? And how does this relate to policy matters, and realities on the ground? […]

Hungarian response to CAP: how has the rhetoric changed?