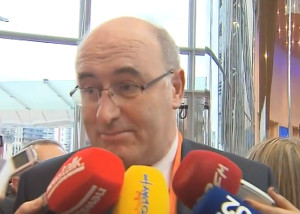 Europe’s new Commissioner for Agriculture will almost certainly be the former Irish Minister for the Environment, Community and Local Government Phil Hogan. His compatriot, ARC2020’s Oliver Moore, takes a closer look at his track record in Ireland. Hogan, from the right-wing Fine Gael Party, part of the European People’s Party, should certainly keep the proponents of so called sustainable intensification happy…

1: Prioritising Intensive Agriculture over Environment… even when Representing Environment.

The Nitrates Directive was adopted across Europe in 1991 with the objective of reducing water pollution caused by nitrates from agricultural sources and preventing further such pollution, with the primary emphasis on the management of livestock manures and other fertilisers.

In 2010, as Environment spokesperson in opposition, he  argued against “ideology” in the Nitrates Directive when the Irish Green Party held the Environment Portfolio.

In partnership with Minister for Agriculture Simon Coveney, Ireland has, this year, increased the amount of nitrogen spreadable on the land to a level beyond that allowed by the Nitrates Directive. It has received a derogation from the EU for doing this:

“ The new derogation allows farmers to exceed the limit of 170 kg of organic nitrogen per hectare set down in the Nitrates Regulations, up to a maximum of 250 kg per hectare, subject to adherence to stricter rules. Today’s derogation vote will allow more intensive farmers to operate at a higher stocking rate than that stipulated in the Directive” the Irish Department of Agriculture reported.

As the Department’s press release of January 2014 stated: “This derogation allows more intensive farmers to operate at a higher stocking rate subject to adherence to stricter rules”

The justification for this change was research conducted the Department of Agriculture’s research wing Teagasc. In particular a study into “water quality and farming in six catchment areas.”  The results from these six areas then, were very important in leading to  a nationwide change in policy.

On the ground, when inspected, farmers all over the country have been failing the Nitrates Directive in increasing numbers. In 2012 it was 32% of inspected farms, by 2013 the figure had risen to a whopping 49.5% of failed inspections.

As the Farming Independent reported in November 2013: “Half of all farms selected for local authority nitrates inspections last year were found to be in breach of the rules…Department of Agriculture inspectors carried out more than 4,900 Nitrates Directive inspections at the behest of local authorities between 2010 and 2012.

Some 1,669 farms were inspected for breaches of the Nitrates Directive last year, prompted by officials in the local county council. Of the 1,669 farms inspected, 827 or 49.5pc were found to have breached the rules and 690 farms (41.3pc) incurred a financial sanction.”

These January 2014 changes  did make some rules stricter: The distance from which farmyard manure can be stored near waters was increased from 10m to 20m for example.

However they also in a number of ways made it easier for intensive farming to ramp up production.  Increases in phosphorus application have been provided for in certain cases; Removal of requirement to establish green cover following  non-selective herbicide use in certain circumstances; increased N rate on winter barley and spring wheat by 20kg/ha across all indices.

With this increased N and P application allowable, it will be easier for farmers to comply with the Directive. But is this automatically a good thing? And with ever more flooding and erratic sometimes severe rainfall because of climate change, what will the effect be on Ireland’s drinking water long term? Under the plans for massive agri-food expansion, Food Harvest 2020, the number of cattle in Ireland is set to rise rapidly up to 2020. This N and P rule change will certainly facilitate this.

2: Driving the Dismantling of LEADER

Ireland has what is considered one of the most successful approaches to LEADER in the EU. Phil Hogan, as Minister for Environment, Community and Local Government and  has been on something of a mission to dismantle this.

Phil Hogan’s plan has been to bring LEADER under the umbrella of the local county councils. Meetings have been held all over Ireland, with hundreds attending from Donegal in the far north to Cork in the south, to oppose this.  The LEADER approach in Ireland is exceptionally community embedded. It has been a bottom up approach, one which actually emerged from voluntary local community action groups, groups that came together to help improve their own local communities. Initially, this had nothing whatsoever to do with the EU or with funding – it was communities in action. While in many EU countries, LEADER operates below the radar, in Ireland every rural community knows about it and its work both in rural development and in local community development.

Even independent centre-right politicians are against this being done to LEADER. MEP Marian Harkin says: “The action by Minister Hogan to move LEADER companies from direct community management to the remit of the County Councils will catapult us right back to the type of gombeen politics we should have left behind a generation ago.  His belief that the fingerprints of politicians or officialdom should be indelibly printed on every single decision instead of following the EU vision of community led local development where we trust communities to respond to the needs of their own areas, is a regressive, centralised power grab which strikes at the heart of community development.”

In essence LEADER in Ireland has been an alternative, community led, participatory way to improve the socio-economic conditions, and inclusivity, of  rural Ireland. This, it seems, is out of sync with the preferences of the right wing Fine Gael party, of which Phil Hogan is a member. As Minister, his actions have been decisive and specific in pulling the rug out form under a great model of rural and community development. The only ray of light is that his departure will help provide an opportunity for something else to happen with county council alignment and the future of LEADER.

3: Climate Change? Not a priority.

When chosen as Environment Minister  Phil Hogan announced that introducing a Climate Change Bill  was  “ not a priority”.

From start to finish of his tenure, Hogan has been criticised for his attitude towards and legislation on Climate Change. In Ireland agri-food makes up 30% of GHG emissions, the biggest single sector,  a figure set to rise with agri-food growth plans.

He specifically rolled back on long term Climate Change targets, dropping the 2050 target of the previous government, despite Ireland having the 10th highest carbon footprint of any country in the world, and being in the category of countries due to make up to 90% reduction in GHGs by 2050.

Though conducted on behalf of the Department of Agriculture and not Phil Hogan’s Department of Environment, it’s worth examining Ireland’s environmental analysis of its food and farming growth plans, called Food Harvest 2020.

This has been described as “a fantasy world in which all farmers use best available technology and obey all the rules regarding environmental protection,”  by the Irish Environmental Pillar.

“The conclusions of the report, which state that the impacts on our waters, biodiversity, soils and climate will be slight or negligible, are just not credible”…“The report also skates over the very likely impact of Food Harvest 2020 on the high nature value farms where more extensive rather than intensive farming is the norm. The omission of ‘stress testing’ of the massive growth planned for aquaculture is another example of where the report lacks credibility.”

EU Commissioners for Agriculture, past and present, talk to viEUws about their experiences of CAP reform […]