7000 people turned up outside of Europe’s biggest chicken slaughterhouse on Saturday, August 31st to demonstrate against the  the kind of industrial farming that is destroying fair, green and local food and farming.  Organized by Wir Haben es Satt, the event was a huge success.

Joined by farmers and environmental, development and animal welfare groups, demonstrators came together in a human chain surrounding the slaughterhouse in Wietze, Lower Saxony, a factory aiming to slaughter up to 430,000 chickens per day and a symbol of failed agricultural policies.  Three weeks before the elections in Germany, they demanded a fundamental change in agriculture, and protested under the slogan ‘Wir Haben Agrarindustrie Satt!’ – We’re fed up with Industrial Agriculture!

Along with the photos from the event, which speak quite loudly on their own (see more here), a few articulate statements help crystalize the urgency of the issue:

Christoph Bautz from the campaign network Campact said, “We, the citizens, are tired of agrobusiness. We want food we can trust on our plate instead of meat from animals pumped full of antibiotics, fed with GM soya, and crammed into mega-stables.  A new federal government must initiate the change in agriculture – for greener, more peasant-friendly agriculture!”

Thomas Schroeder, president of the Deutsche Tierschutzbund (German animal protection alliance) called for a new agricultural policy for Germany. “More and more animals into larger and larger barns – this is an aberration. New mega-stables mean exponentially more animal suffering and a destroyed environment with nitrate-laden, declining groundwater levels.  The environmental damage and cost of repair is then passed on to the public; that’s why meat is much too cheap.  We need higher standards and we need a new funding policy.”

Johanna Böse-Hartje, organic farmer from the Bund Deutscher Milchviehhalter (German Milkboard) and the Arbeitsgemeinschaft bäuerliche Landwirtschaft (Small Farmers’ Association) said: ” The chance for a new agricultural policy has never been so great as now. Immediately after the election, decisions will be made on how to implement EU agricultural reform into national law. Instead of subsidizing factory farms even more, small farms must be promoted. Let’s vote out agribusiness on 22 September.” 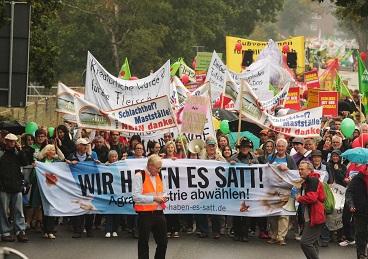 Speaking on his experience from the camp, workshops, and demonstration, Jonty Wittleton of RAW said : “The event confirmed my long-held belief that factory farming is no single-issue cause for animal-welfarists – far from it. This system of agriculture is at the sharp end of our food, our jobs, our economy, our environment, our countryside and our communities. In fact, there is very little that isn’t shaped in some way by the production of the food we eat. ”

As BSE is discovered in Ireland once again, the political momentum is away from Country of Original Labelling. How is this happening? […]

Did you know it is possible to be a small scale gardener before breakfast and a destroyer of small scale production in work? Meet Traian Basescu. […]

We Are Fed Up – Food, Climate & Rights on Berlin’s Streets

It is high time that our food movement connects with cross-cutting issues that will define the future we want. Pavlos Georgiadis analyses the intersectional, cross-cutting rights issues that brought him to Berlin for Wir Haben Es Satt […]