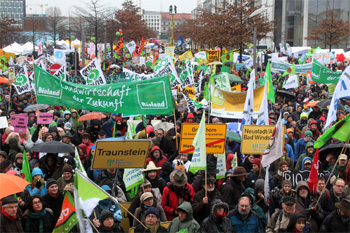 Despite cold temperatures, Saturday saw 23,000 people take to the streets in Berlin to protest against the EU’s and Germany’s food and farming policy. Under the motto “We’ve had enough! – Farms instead of agribusiness”, people came to protest against genetic engineering in food, food scandals (such as the recent antibiotic story) and animal cruelty in industrial farms, and demand a future of agriculture that works with, not against, the environment. Consumers, environmental and animal rights activists, beekeepers, farmers and developmental groups gathered in front of the German Chancellor’s Office and demanded that Merkel reorientate agricultural policy.

Learn more and watch a video of the event here: http://www.wir-haben-es-satt.de/

After the “We Are Fed Up!” demonstration is before the action! At the Soup&Talk event Farmers, organisers and activists from Germany, Europe and overseas reported on their campaigns, successes, their resistance and innovations in food and farming. […]

If remote rural communities want to be part of the conversations that will shape their futures, the ability to connect with other projects and stakeholders is a crucial skill. For one island community, the coronavirus crisis was a crash course in online networking. Hannes Lorenzen reports on Eco-Week 2020 and the digital leap forward on his home island of Pellworm, Germany. […]

What are the different political parties’ positions – in Germany and at EU level – likely to be regarding CAP reform? with Sebastian Lanker. […]