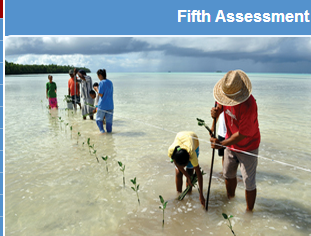 The Green Revolution has reached a plateau, and climate change is already effecting food yields and food security. These are some of the most prominent, new warnings which have emerged from the new IPCC (UN) 5th Assessment Report on Climate Change.

“The effects of climate change are already occurring on all continents and across the oceans. The world, in many cases, is ill-prepared for risks from a changing climate” the report states.

A total of 309 coordinating lead authors, lead authors, and review editors, drawn from 70 countries, were selected to produce the report. They enlisted the help of 436 contributing authors, and a total of 1,729 expert and government reviewers

Such is the gravity of the situation, the 2600 page 32 volume report mentions the word risk 230 times, the Guardian reports from Yokohama. Its reporter added added “this report struck out on relatively new ground by drawing a clear line connecting climate change to food scarcity, and conflict” including food riots.

Wheat yields have begun to decline, as have maize yields, while fish stocks in the tropics may be down by up to 60%.

We at Arc2020 have for some years been pointing out that  there are inevitable limits to agri-industrial growth, so it is significant that now the IPCC’s 5th report emphasises it to such an extent. This is the first time the IPCC have gone this far and made both these linkeages and critiques. The model is broken.

There are numerous indicators of this already. Research points to three key planetary boundaries being crossed in recent years: the nitrogen cycle, climate change and, especially biodiversity loss. In each of these three areas, industrial agriculture has contributed significantly. As an example of just one of these – biodiversity loss – half of all the farmland birds have been lost in Europe since 1980- over 300 million birds.

Recently retired UN Special Rapporteur on the Right to Food Olivier DeSchutter, in his final report,  clearly points out both problems and solutions, as reported on Arc2020 recently.

And as De Schutter and others have pointed out during his time in office, agroecology in general and agroforestry in particular  offer up significant opportunities to deal with the multi-faceted agri-food issues we face today.

Organic farming too offers up lots of potential. Conventional farming does not match organics environmental performance in any of the main relevant categories – biodiversity, soil, landscape, ground and surface water, climate/air and energy.

What is needed is significant investment in researching how to maximise sustainable, holistic organic farming yields, for conventional farming to learn lessons from organic farming and radically tighten up its environmental performance. Concurrently, we need to deal with issues of waste, of improved processing and distribution for better foods, and of dietary change towards less reliance on copious amounts of meat and dairy.

Our job here at Arc2020.eu is to keep you informed of both the problems and solutions as we move into a world where food will, increasingly, become a 21st Century battle ground. If we seize the long moment, agri-food can also be a living better, and both climate change adaptation and mitigation opportunity.

Alan Matthews on the Current CAP process in Ireland

In this second of a two part series with Alan Matthews, we discuss his home country of Ireland and CAP. Oliver Moore speaks with Matthews on Ireland’s greenhouse gas emissions; its increasing herd size, in particular in dairy; the success of the European Innovation Partnerships; the role of coops; issues facing the beef sector; diversification and more.   […]

Hans Herren calls for a Radical Transformation of Agriculture

We need a radical transformation of agriculture and industrial food systems to deal with future challenges, says Hans Herren, In an interview published in the Foundation on Future Farming’s new brochure “Agriculture at a Crossroads”, he takes stock of the IAASTD’s impact and looks at the current debate on food and farming systems. […]