Agroecology is commonly understood as a science, a movement, and a practice, jointly transforming agroecosystems to less fossil fuel dependent, more autonomous and more resilient farming systems. The food chain is considered from a systemic perspective, with family farms at its center, and a holistic view expanding from soil over resource use to community sovereignty. Agroecologic practices and research have evolved and are being applied around the globe. What unites these movements, what separates them? How is it different in Europe compared to Latin America? Is there a universal approach to agroecology?

The origins of agroecology

While the 20th Century, in particular  from the late 1960s on, saw the emergence of an organic farming movement, agroecology as a disciple has its own, specific trajectory. In Europe and the US, agroecology as a scientific discipline came to life in the 1930s, when agronomists, crop physiologists and ecologists found out they were dealing with the same research problems and could benefit from an exchange between the disciplines. However, it was not before the 1970’s that a critical mass of the general public became interested in ecological effects of agriculture. Then, problems connected to the Green Revolution were becoming visible, and solutions to the question of how to feed the world without destroying the planet became more pressing.

While in Europe and the US, agroecological research approaches led to the publication of scientific papers and books and the implementation of education programs, in Latin America agroecology started with the hands in the soil, long before the traditional management of agroecosystems received the stamp of agroecology. In many Latin American countries, agroecology evolved as a social movement. It was a response to repression, a shimmer of hope for a decent life in contexts where governments and the industry had promised paradise; the reality was food production through monopolization and privatization on the hands of few, leading to expulsion from territories, dependence on price developments dictated by companies and inequality.

So while in Europe it was rather scientists defining concepts and classifying practices, in Latin America, battles about autonomy and food sovereignty were carried out on the fields.

However, there were also scientific approaches beginning in South America. In Chile for instance, NGOs in particular were the entities that kicked off agroecological research and built a bridge between agricultural territories and universities. The scientific discipline and the social movement evolved hand in hand in that country. More generally, several regional and local associations have also emerged. SOCLA, the Latin American Scientific Society of Agroecology, has been contributing scientific data to the goal of promoting food sovereignty in Latin America through agroecology since 2007, complementing social-ecological movements like La Via Campesina or MAELA, the Agroecologic Movement of Latin America.

2007 is not that long ago, one might think. However, these regional associations feed on the experiences local organizations gathered over decades. In Brasil, the Landless Workers Movement emerged back in 1984, Cuba’s National Association of Small Farmers has worked on promoting urban agroecology since 1961 as a response to the U.S. blockade, and Argentina‘s National Campesino and Indigenous Movement fought for access to land after land concentration and inequality increased in the neoliberal era in the 1990s. The Campesino-a-Campesino Movement has become a synonym for farmer-led agricultural knowledge transfer throughout the continent.

In the history of Latin American rural struggles and fightings for autonomy, another aspect has been crucial. For better understanding, let’s have a look at the legend on how corn came into Mexican peoples’ lives.

The Coming of Corn and the Three Sisters

For a long time, the Aztecs lived on roots and game; they did not eat corn because it was beyond their reach, hidden between the mountains, and no Aztec god had succeeded in reaching there. Their sparse life lasted until the god Quetzalcoatl replaced the forceful attempts of separating the mountains applied by former gods with intelligence the problem was solved. He transformed into an ant, crossed the mountains and pulled out one seed of maize from the various that were growing on the other side. Coming back, he handed the seed over to his people, who put it in the earth. And from that moment they cultivated and harvested corn and became a strong and healthy culture that built impressive temples, cities and palaces for hundreds of years.

This is the Mexican legend of how people started cultivating maize, and still nowadays, corn plays a key role in Mexican dishes – like Arepa, Tamali or Polenta. The culinary traditions are accompanied by ceremonies and rituals connected to the growing cycle of maize, such as the Milpa – the Milpa is a beneficial plant combination made up of maize, beans and squash. Known as the three sisters in the English speaking world, the Milpa has become a symbol of successful plant companionship. Various farmers and gardeners adapt it to their fields, making it a success story of agroecological knowledge transfer around the globe.

The legend of Maize tells us about how the connection to the land and shapes our understanding of what is grown on it and how it is grown.

Agroecology is a melting pot of not only diverse practices and disciplines; its diversity originates from the very different stories told by millions of farmers and their ancestors. It is the relation between peoples and their lands, it is identity and it is home.

Especially in countries with a significant population of indigenous people struggling for a decent life on their land, the food typically grown on this land is of immense cultural and symbolic value. For the fact of having farmed with low external inputs and depending on the sustainable soil cultivation for centuries, these traditional practices are congruent with what we understand as agroecological practices today.

Where agroecology in Latin America has evolved from social movement standing up against the disruption of peoples and their lands, European countries have their own stories to tell.  First there is the very early history of the organic movement, as unpacked by people like Philip Conford.

The expressly agroecology movement, however, has begun to bring itself together into a visible movement. Just in 2017, Agroecology Europe has launched the first Agroecology Forum to join with practitioners, scientists and activists from all over Europe to exchange experiences and discuss what Agroecology means in a European context.

In Germany, independent research associations auch as Agronauten are exploring ways of integrating social and ecological aspects into agriculture, and universities are offering programs to include agroecological content, such as the bachelor program Agricultural Sciences at Uni Hohenheim or Uni Rostock. However, unlike in the United Kingdom or the Scandinavian countries, there is no explicit agroecology study program in Germany.

The German working group for peasant agriculture, an association of family farmers, is part of the Via Campesina network, the world’s leading association promoting food sovereignty through agroecology. The youth version of this working group organized a workshop on agroecology in practice in 2015, asking how Latin American examples of agroecology could be transferred to Germany.

Initiatives practicing agroecology in Germany are oftentimes led by young, educated farmers. In the surroundings of Berlin, more than 60 community supported agriculture projects have emerged in the past years. The local young farmers association “Bündnis Neue Landwirtschaft” unites young farmers of the region in their desire to preserve rural landscapes and establish fair working places.

Why are these developments important to keep in mind when we think about how to realize and scale up agroecologic approaches in a European context? Because of the crucial role of farmer knowledge. Farmer knowledge is the experimental knowledge passed on over generations and complemented by intimate knowledge of local conditions and adaptation to its changes. This knowledge is generated on field, and differs from location to location. Despite the positive examples mentioned above, in many European countries, we observe a similar trend – small farms are disappearing, the average size of farms increases, the number of people working on the land decreases. While in 1970, 8,4% of employees were working in the primary sector comprising agriculture, fishery and forestry, this proportion shrank to 3,5% in 1990 and 1,6% in 2012. This decrease, often framed as “land restructuration” implies a loss of farmers local knowledge, which is crucial for the development of resilient agroecosystems.

The development of agroecology in Europe will differ from Agroecology in Latin America – its language and emphasis, its targets and trajectories, will be specific to its context.

European agroecology may be more technology oriented, it may be more regulated and it might both be a top-down and bottom-up approach at the same time. The only thing we know for sure is that it must be unique to be authentic, in each and every location. Farmers’ stories need to be told, while farmers can engage with their broader locale’s too, encouraging local politicians to adapt policies to local farming conditions.

Initiatives like EIP – the European Innovation Partnership – are a good start, but they must remain farmer-led. Because, fundamentally, agroecology, on either side of the Atlantic, places the farmers at the centre of an agri-food system. 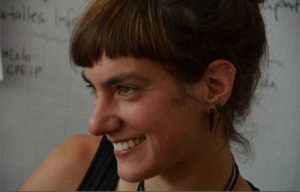 Carmen Schwartz is currently working as an organic seed breeder in Bingenheim, Germany. She has worked with the Chilean national agriculture institute and worked with several farming communities in Chile and Peru. Her scientific focus is on resilient agroecological farming systems and she holds a Msc. on Global Change Management from the University for Sustainable Development Eberswalde.

Agroecology: How to make the very best of Europe’s CAP

Carmen Schwartz is currently working as an organic seed breeder in Bingenheim, Germany. She has worked with the Chilean national agriculture institute and worked with several farming communities in Chile and Peru. Her scientific focus is on resilient agroecological farming systems and she holds a Msc. on Global Change Management from the University for Sustainable Development Eberswalde.

Exclusive: Olivier De Schutter on why “a Common Food Policy is urgently needed”

Carbon farming is a new buzz word, hotly debated in the EU Commission, in European Ministries and Chambers of Agriculture, and the subject of numerous projects and movements. It is in fact proposed as an ecoscheme by the Commission.  So far, however, there is no binding definition of “carbon farming” and there seem to be many different understandings of the term. What most approaches have in common is the objective of storing carbon in the soil in some way. Soil Scientist Dr. Andrea Beste unpacks some important points for this contested approach to soil and land management. […]