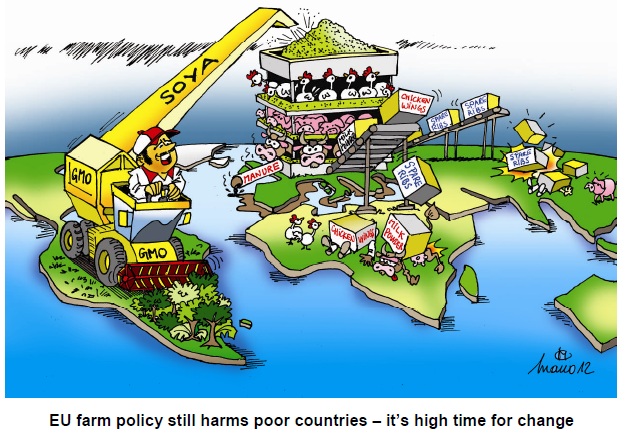 Current proposals to reform the Common Agricultural Policy (CAP) fail to deliver our critical need for fairer and sustainable food and farming systems.

The new CAP has to lead to a system which does not destroy other countries markets and which gives priority to fair prices for farmers and consumers, not to cheap exports, taking into account the costs of sustainable production in Europe.

The EU is heavily dependent on the import and use of external inputs – feedstuffs, fertilizers, pesticides, fuels, heavy machinery. Currently, 80 per cent of protein animal feed for European livestock is imported which grabs 16 million hectares of land from local farming communities in South America, promoting GMO monocultures with devastating impacts on the environment.

The impacts are not restricted to developing countries: This model also leads to unsustainable arable and animal production where large areas in Europe have lost their fertility and are polluted with nitrates, phosphorus and pesticides.

Europe’s land footprint is one of the largest in the world. This demand for land not only prevents many developing countries from developing their farming sustainably, but also drives land-grabs, pushes up food prices and exacerbates social inequality.

The EU must meet its commitment to “do no harm”

The Lisbon Treaty obliges the CAP to take account of the EU’s role in the world and its impact on sustainable development and the eradication of poverty. In line with Policy Coherence for Development, the CAP must promote the implementation of the right to food in developing countries which means enhancing their ability to become more self-sufficient and less dependent on food imports and artificial inputs.

The CAP reform is an opportunity to reverse these trends and reduce Europe’s negative impact on developing countries. The new CAP should explicitly promote proven agro-ecological practices and introduce measures such as mandatory crop rotation, including the production of plant proteins in Europe, which have positive effects on soil fertility, climate change and production costs.

Europe must stop generating surplus food commodities for export based on cheap imported inputs and deliver a fair and an environmentally sound farming policy that contributes to global food security.

European citizens demand constructive, sustainable, long-term solutions. We have them!

Missing link between food and territory highlighted in Italy

Land and tenure issues come to the fore at G8 meeting