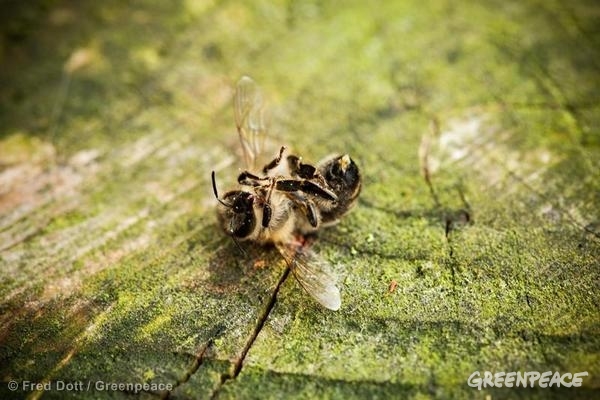 The report, which is an analysis of pesticide residues in comb pollen (beebread) and trapped pollen from honey bees (Apis mellifera) in 12 European countries reveals the quite shocking results: Over two thirds of the pollen that honeybees collected from European fields and brought to their hives to feed their larvae is contaminated with a cocktail of up to 17 different toxic pesticides. The chemical cocktail contained insecticides, acaricides, fungicides and herbicides, likely produced by agrochemical-companies like Bayer, Syngenta and BASF.

Although the study is a snapshot of the toxicity of Europe’s current agricultural system, in terms of the geographical areas covered, and the numbers of samples taken simultaneously, Greenpeace conducted one of the most extensive studies of pesticides in bee-collected pollen carried out to date.

The numbers speaking for themselves: in the 107 samples collected by Greenpeace from 12 countries and analysed at an accredited laboratory  detected  in total 53 different chemicals.

The results indicate the widespread use of the insecticides chlorpyrifos (in 18 samples) and thiacloprid (14 samples), as well as the fungicide boscalid (14 samples), which were the most commonly detected residues in trapped pollen samples.

The results also indicate that a wide variety of plant protection products, particularly fungicides, were present in the trapped pollen, with a maximum of 17 different residues (three insecticides/acaricides and 14 fungicides) detected in a sample from Italy.

According to Greenpeace the research also raises significant questions about likely exposures of wild bee populations and other wild pollinators to chemicals through various pathways. These exposures have either been ignored or have been underestimated in past and current discussions of bee health and pollinator protection measures.

Matthias Wüthrich, Greenpeace ecological farming campaigner: “This study on contaminated pollen reveals the unbearable burden of bees and other vital pollinators. Bees are exposed to a cocktail of toxic pesticides. This is yet more proof that there is something fundamentally wrong in the current agricultural model which is based on the intensive use of toxic pesticides, large-scale monocultures and corporate control of farming by a few companies like Bayer, Syngenta & Co. It shows the need for a fundamental shift towards ecological farming.”

Greenpeace calls on the European Commission and policy makers across Europe to:

·        Extend the scope of restrictions already imposed on the use of certain pesticides harmful to bees, namely clothianidin, imidacloprid, thiamethoxam and fipronil, so that their use is completely banned.
·        Fully ban all other pesticides harmful to bees and other pollinators (including chlorpyrifos, cypermethrin and deltamethrin).
·        Set ambitious Europe-wide action plans to better assess pesticide impacts on pollinators and reduce their use.
·        Encourage research and development of non-chemical alternatives to pest management and promote the widespread implementation of ecological farming practices on the ground. 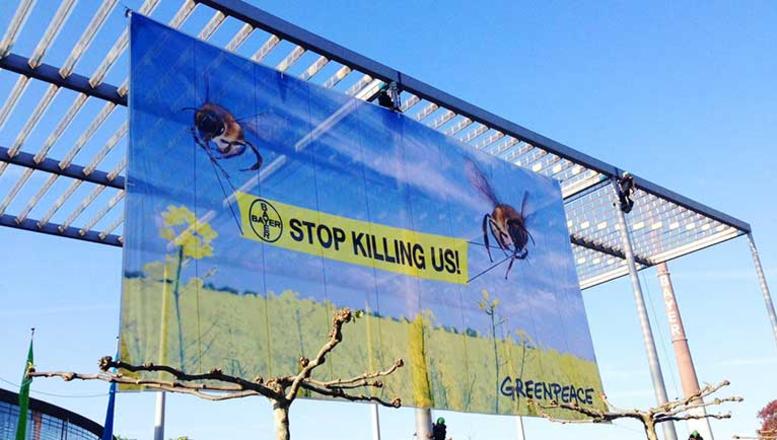 In order to protest against the beekilling pesticides in pollen and the current bee-kill incident in Germany, where about one

million bees died as a result of  Bayer neonicotinoid clothianidin, more than 20 Greenpeace-activists unfurled a 10 x 17m fotobanner with bees at the Bayer headquarter in Leverkusen (Germany). This simply stated: “Bayer: STOP KILLING US!”. With this action the activists are further exposing the agrochemical industry as the main beekiller and driver of the current destructive industrial agricultural model.

Greenpeace is calling everyone to be part of the global movement to save the bees and promote ecological farming by signing their petition.

See here for ARC2020’s comprehensive set of articles on bees

The European Parliament voted to oppose the importation of three genetically modified (GM) soybeans into the European Union. This vote sets it against the EU Commission, which wants to authorise these GM soybeans for feed use. […]