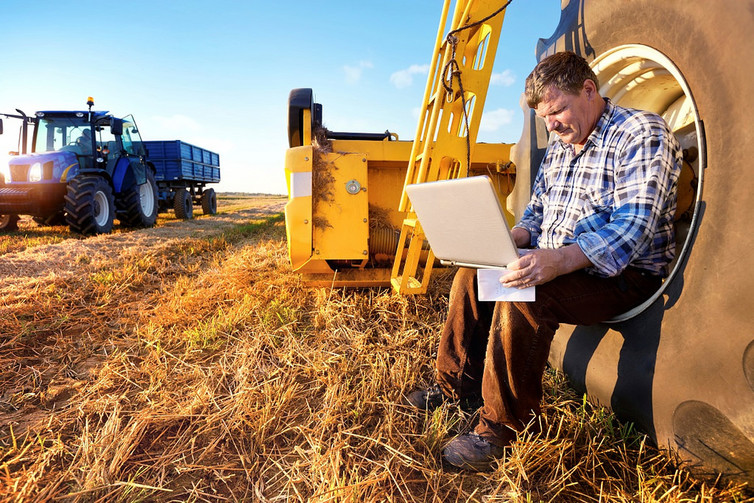 Farmers continue to look for ways to certify their crops. U.S. Department of Agriculture/Flickr, CC BY 4.0

If the food industry is not in crisis, it certainly contains an increasing level of complexity and associated risks. A recent analysis suggested 50% of US food production is wasted, with global estimates above 30%.

Food scares such as mad cow disease (BSE) and cross contamination mean many consumers have less trust in their food, increasingly seeking information on authenticity and production practices.

Over 80% of antibiotics used in the US are used in food production. Farming practices lead to environmental issues and may exacerbate to climate change. Alternate “real world” models are being developed to address some of these issues. For instance, farmers’ markets can reduce food miles, and demonstrate localism. Gleaning, where people collect leftover crops from farmers’ fields after they have been commercially harvested, is becoming popular. There is ever increasing legislation and standards, though these tend to be national or regional, and often onerous to implement.

Recent developments in the digital economy could help. Among these are a growing use of sensors providing information to allow more intelligent practices to reduce costs and improve flexibility. Real time temperature monitoring and smart fridges in homes can help reduce waste. But a relatively new innovation, the blockchain, is seen by many as offering significant opportunities within agricultural supply chains.

Blockchains are the technology that underpin cryptocurrencies like bitcoin, but they have uses other than currencies. They record information in a distributed ledger in a way that is both secure and immutable; by being distributed among many users these ledgers are resilient with no single point of failure, and they can be (depending on design), transparent to all users.

Described by the Economist as “the trust machine”, blockchains provide supply chain transparency and data integrity, allowing a visible assurance of authenticity.

A number of startups are exploring the potential for blockchains in agriculture. Most notable is Provenance.org, a small UK B2B software startup using the blockchain to establish the authenticity of high value goods, including food. They are experimenting with proving the supply chain of tuna caught in Indonesia being delivered to Japanese restaurants. They will use information on sensors or RFID tags and local certification, recorded in the blockchain, to track the fish along its journey from “hook to fork”; creating in the words of one of their founders, a “reputation system”.

Other software firms are developing similar off the shelf solutions for global tracking. Innovators are researching ways in which DNA can be recorded and tagged to an animal, and recorded in the blockchain. This information can easily be made available to end users and customers using mobile phones and apps.

BlockCrushr Labs is a Canadian startup addressing issues of local food poverty and is using the currency and transparency aspects of blockchain technology to increase donations to homeless people, and also to ensure these donations are responsibly spent.

Farmshare is using blockchain to evolve community-supported agriculture, where a local “currency” can be used to purchase locally produced food within a natural community.

A wireless sensor firm, Filament, is developing sensors to monitor crop health and recording results in a blockchain. Others are embedding sensors in the harvested crop to record temperature and humidity. These make it easier to trace damaged crops. Linking these sensor records to other connected equipment in the internet of things, such as transport and storage coolers ensures end to end monitoring and safe handling.

Skuchain is developing improved barcodes and RFID tags, and blockchain technology with the aim of protecting end to end global supply chains against counterfeiting.

Firms such as sandwich chain Subway have pledged to remove antibiotics and preservatives from their ingredients. If the wish to deliver these promises, a transparent blockchain where product origin and contents are visible to all would seem to be a suitable approach.

We may typify these proofs of concept and ideas as using the blockchain to provide a permanent audit trail, where visibility leads to accountability and trust, without the need to establish local reputation. This philosophy is obviously not restricted to agriculture.

However blockchain solutions have their own limitations. Principal among these are the need to ensure a tight coupling between the product and its digital representation, and the ongoing need for some form of reputable local certification system in the first mile to, for example, establish the fact of ethical practices.

The inevitable mixing of products and supply chains is another factor complicating easy adoption and implementation. For these reasons current proofs of concept tend to be high value and low volume, and often stimulated by strong social motivations of their founders. Blockchains can only be part of a wider solution, and may remain limited to niche markets where establishing provenance can command higher returns.

This article was originally published on The Conversation. Read the original article. Companies around the world are exploring blockchain, the technology underpinning digital currency bitcoin. In this Blockchain unleashed series, we investigate the many possible use cases for the blockchain, from the novel to the transformative.

There has been unrest in rural communities across Poland for some years. Land prices have increased dramatically and despite a moratorium on foreign land purchasing, foreign entities have found a way to buy land. Polish farmers are despairing and protesting en masse. Hans Wetzels reports from Poland on land grabbing. […]