Ask most people how much water goes into producing the ingredients for a single cup of coffee and listen to some bemused guesses. Ask Dr Craig Jones and he will look you straight in the eye and tell you 710 litres – represented by the stack of bottled water in the photograph. 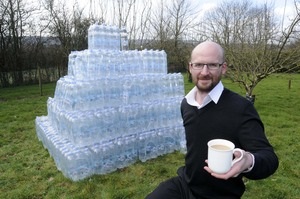 The term carbon footprint has passed into the English language. But any informed debate of future food policy will need the term water footprint to be more than just two words in a dictionary. A water footprint is the total volume of water that is used to produce the items used or consumed by nations.

Dr Jones is the principal associate of UK consultancy Sustain. To raise a wider public awareness of the impact water consumption has on day to day food choices, he developed a downloadable water footprint calculator.

Consumers can enter the ingredients for a meal to learn how much water went into producing the meal. The coding in the Excel spreadsheet will also make allowances for different countries of origin in its calculations.

Launched on World Water Day, Sustain’s principal associate Dr Jones told ARC that “Our aim is to raise awareness about this vital issue, both in the UK and across Europe, so that individuals can reduce their water footprint as quickly and as simply as possible.”

In 2012, the Environment Agency warns, the UK experienced drought one day in four and risks severe short-term drought once every decade. The agency’s analysis predicts severe reductions in summer river flows across the country in years to come, making water availability a priority for the population.

When this extended to an understanding of how much water is needed to produce food (sometimes also called embedded water), animal-based products assume a far greater impact than might have been expected. For instance, producing a kilogram of beef takes 15,400 litres of water, reflecting the cradle-to-grave feed and forage consumption of the animal concerned.

It is important to go further than linear notions of this process. The interaction of different cycles within the biosphere can, of itself, generate changing patterns, such as climate change at a planetary level.

All too often access to land is an insurmountable hurdle for new entrants to farming. The innovative Ecological Land Co-operative tackles this head-on, by developing accessible smallholdings for ecological agriculture and supporting new farmers.  […]

‘Real opportunity for a step change’

Highlights of DEFRA speeches from the Oxford Farming Conference […]