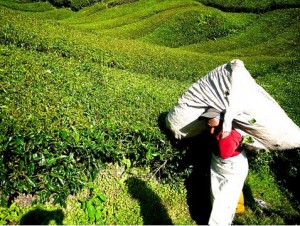 We belong to civil society groups and social movements from around the world who work on food, farming and climate change issues. We stand with the small-scale farmers who represent 90% of all farms worldwide, and who produce 70% of the world’s food, on less than a quarter of the world’s farmland.

We are well aware that the impacts of climate change are now felt on farming and food production in every region of the world. The multiple challenges farmers face include extremes of heat and cold, droughts and floods, unpredictable rainfall patterns, salinization of soils, loss of land from rising sea levels, and new pests and diseases. The threat to our ability to farm and eat is one of humanity’s greatest concerns about climate change.

We also recognise that certain types of agriculture – particularly large-scale industrial agriculture approaches – which negatively impact on the livelihoods, land rights, ecosystems, crop diversity and resilience of farming systems around the world, are also largely responsible for significant greenhouse gas emissions which contribute to climate change.

We recognise the need for action to enable food and farming systems to adapt to climate change. And we believe that to reduce agriculture’s contribution to the problem, we must find ways to phase out destructive industrial approaches, and incentivise agro-ecological methods that work best for the world’s small-scale farmers and the planet. We know that food productivity is key for food security. But it cannot take place at the expense of farmers’ rights, or the health of the soils, water and ecosystems on which agriculture depends.

The new Global Alliance on Climate Smart Agriculture states that it aims to be the forum to deliver the necessary thinking, exchange and action that can enable farming to deal with the impacts, and reduce its contribution to climate change. It hopes to influence the development and adoption of policies by countries, and is aiming for a high-profile launch at the UN-Secretary General’s Climate Change Summit in New York in September. Governments, corporations, civil society groups and academic institutions are all invited to join.

But we have major concerns and questions about this Alliance.

Without addressing the following elements, the Alliance cannot hope to address climate change, food insecurity, or the resilience of communities. In fact, the Alliance may serve to undermine the very objectives it says that it aims for.

• NO ENVIRONMENTAL CRITERIA: The Alliance is open to anyone who subscribes to a broad framework document, and who is willing to share information about their activities. But it gives no defined criteria for so-called “Climate Smart Agriculture.” Industrial approaches that drive deforestation, increase synthetic fertiliser use, intensify livestock production or increase the vulnerability of farmers, are welcome to the Climate Smart family, and are apparently free to use the Alliance to promote their practices as solutions to climate change. Without clear standards for adaptation and mitigation that ensure environmental integrity, the Global Alliance for Climate Smart Agriculture could serve as a green-washing and policy-influencing platform for the planet’s worst offenders.

• NO SOCIAL SAFEGUARDS: Companies with dire social impacts on farmers and communities, such as those promoting Genetically Modified (GM) seeds or driving land grabbing already claim that they are practicing “Climate Smart Agriculture.” GM seeds contaminate and erode seed diversity, and criminalise the seed saving practices that farmers need to adapt to climate change. Without social safeguards in place, we are concerned that the Alliance may be used to promote approaches that increase the dependence of farmers on external inputs that trap them in cycles of debt and poverty, and that leave them even more vulnerable to climate change.

• CARBON TRADING: In some cases, Climate Smart Agriculture projects are funded by carbon offset schemes. Farmers are already harvesting the bitter fruits and paltry returns of a failing global carbon market. Many groups question the environmental integrity of the concept of carbon offsetting as a whole. Carbon sequestration in soils is not permanent and is easily reversible, and should be especially excluded from schemes to offset emissions. The binding nature of projects such as these could even limit farmers’ ability to adapt to new climate challenges.

• GOVERNANCE, POWER AND CORPORATE ALLIANCES: The governance structure of the Alliance is still unclear. There is a significant risk (some might say likelihood) that the unequal power relations seen elsewhere in the world are echoed in the Alliance, and the agendas of corporations and wealthy governments are given greater weight than those of civil society organisations, small-scale farmers and developing countries. In such a space it may not be possible to challenge the real causes of vulnerability, or find the real answers about how we must produce, exchange and consume our food in the face of climate change. As civil society groups we often challenge the power and practices of agribusiness corporations. We do not wish our presence in the Alliance to effectively legitimise those that we criticise.

• UNACCOUNTABLE: The Global Alliance on Climate Smart Agriculture states that it aims to influence policies at national level; but it makes no reference to the wealth of knowledge, expertise and carefully considered approaches such as the UNFCCC climate negotiations on agriculture, or the FAO’s Committee on World Food Security (CFS). Several frameworks developed within the CFS, internationally agreed and recognised, such as the Voluntary Guidelines on the Responsible Governance of Tenure of Land, Fisheries and Forests, which could help the Alliance to develop a rights-based approach to agriculture, are not taken into account. By ignoring these participatory spaces, the tools they develop, and their understanding of climate change, food security and farmers’ rights, the Alliance’s values and approaches could duplicate and undermine these official UN processes, and end up in an unaccountable free-for-all in service to its most powerful members. Above all, the Alliance cannot serve as a means through which corporations decide national policies.

• JOIN FIRST, FIND OUT LATER: We have many questions about the Alliance, but we are told that the only way to address our concerns is to join the Alliance and engage in its meetings.

The Global Alliance on Climate Smart Agriculture is ambitious, and it is broad. But we cannot join something that is so ambitious that it ignores important environmental and social concerns. And we cannot be part of a movement that is so broad that we appear to stand alongside the very actors we denounce.

We challenge the Alliance to acknowledge and genuinely address these concerns. As things stand, we do not see how it can claim to be an appropriate response to climate change, or a smart option for farmers and food movements.

Suprising as it is to western ears and eyes, there are opportiunities for people in China to actively participate in a good food system […]

ARC asks DEFRA about their plans for the CAP […]