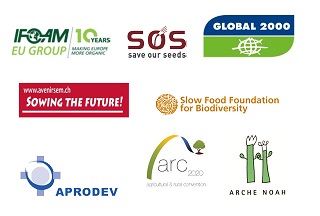 Brussels, 07/05/2013 – “The proposal for the new EU seed marketing regulation is a big disappointment with regard to seed diversity, despite the EU Commission’s announcement to better take into account agricultural biodiversity and consumers’ demands”, say NGOs after a first analysis after its release on Monday. “We now urge the Members of the European Parliament (MEPs) and the Council to take steps for substantial improvement.”

The proposed regulation is hallmarked by the corporate agro-industrial lobbying efforts. It primarily aims at forcing productivity and focusses on industrial export-oriented agriculture. Other stakeholders´ demands are not considered sufficiently.

Scope leaves little room for non-commercial activities: The legislation on Plant Reproductive Material (PRM) sets out the rules for the marketing of seeds and other propagation material. Different from the current legislation, the new regulation applies to all kinds of transfers, even if free of charge, and is not limited to the marketing of seeds with a view to commercial exploitation. As a consequence, the industry-compatible rules will be enforced on all participants of formal or informal seed systems.

Niche-market handled too restrictive: Despite the fact that the Commission introduced a new derogation for individuals, small actors for the marketing of “niche market material” and old traditional varieties, these remain far too restrictive and are not sufficient to prevent the negative effects on small actors, seed savers and diversity farmers and seed diversity itself.

Important decisions left to Delegated Acts: An important amount of legal provisions and derogations is being delegated to the EU Commission, diminishing the space for democratic control, whilst the scope of action and the derogation possibilities for Member States are minimalized.

Sustainability in danger: “With this proposal that puts productivity and control over resilience and diversity, we risk to miss a very important chance for improving the EU seed policy towards social and environmental sustainability. To respond to the pressing challenges our food systems are facing, the EU seed legislation urgently needs a ‘Greening’. The availability of a broad range of varieties bears the potential to support the delivery of ecosystem services from farm land and to reduce the amount of inputs such as water, chemicals and pesticides.” says Heidi Porstner, agricultural campaigner of Friends of the Earth Austria / Global 2000.

Diversity without future? Piero Sardo, President of the Slow Food Foundation for Biodiversity, is concerned that the disappearance of local seeds will go hand in hand with the disappearance of small farmers who are the guardians of seed diversity, local food cultures, and traditional knowledge. “Seed is the base of agriculture. It molds the farming systems same as the final products. In order to protect biodiversity and the practice of foodsovereignty, it is thus necessary to firmly reassert the value of traditional seeds and find a solution to curb their loss on at a global scale.”

Christian Schrefel, chairman at the seed savers organisation ARCHE NOAH, analyses: “Seed diversity will be banned to micro niches, limited by quantitative, geographic or historic restrictions [articles 36, 57]. Following the proposed rules, local seed savers may exchange their seeds but not take a cent for it [article 2], whilst farmers may face fines if they pass on their farm saved seeds.” Schrefel adds: “The best way to improve cultivated biodiversity would be to have no mandatory registration for open pollinated varieties at all. Because it cannot be proofed that this bureaucratic regulation really serves the public interest.”

Antje Kölling from the IFOAM EU Group misses a stronger commitment to introduce rules for the marketing of plant varieties with a broader genetic spectrum (‘heterogeneous material’). “The provisions concerning population varieties (Article 14.3) are not more than an option – we demand a firmly grounded commitment for open pollinating and population varieties to have a solid stand within this regulation.”. Varieties with a wider genetic basis are essential to conserve and improve the capacity of food production systems to adapt successfully to changing environmental conditions. Any plant material stemming from GMOs or from patented breeding techniques must be excluded from the possibility to be registered under this special category.

Farmers under threat: Karin Ulmer from APRODEV: “The criminalisation of farmers owned seed systems will be exported to third countries through the EU equivalence system and specific export agreements. Especially in developing countries, where farmers’ seeds still are the sole basis for local food systems, the consequences of such EU PRM legislation will be even more devastating, putting at risk traditional farming systems and women farmers who feed 70 percent of the world’s population, including the most vulnerable.“

The regulation must recognize the rights of farmers to save, reuse, share, sell and protect their seeds, as stipulated in the International Treaty on Plant Genetic Resources for Food and Agriculture

Civil society organisations now call on the European Parliament and the Council to make this regulation more respectful towards the environment, consumers’ expectations and the needs of small actors in the seed chain or take the opportunity and abolish all bureaucratic rules that can no longer be justified.

In May 2012, more than 250 civil society organisations already addressed the EU Commission and the European Parliament in an Open Letter: www.SeedForAll.org

Press release issued by ARC2020, APRODEV, Arche Noah, GLOBAL 2000 (Friends of the Earth Austria), IFOAM EU Group, Save Our Seeds, The Slow Food Foundation for Biodiversity and Sowing the future!

A small number of companies and organisations dominate the cereal seed sector in one of the EU’s most important seed producing countries. […]