Written by: Ramona Duminicioiu (above!), Agrobiodiversity Campaigner at Eco Ruralis

On the 2nd of March, European governments voted on a new law that grants them extra powers to ban the cultivation of genetically modified (GM) crops in their territories. The vote arrived after five years of negotiations and recent approval by the European Parliament. For the first time national governments have the right to ban entire categories of GM crops. However civil society groups and the European Parliament have criticized the law for requiring governments to consult with biotech companies when banning a GM crop.

Friends of the Earth Europe highlighted that “This new law is a massive opportunity for national governments to shut the door on biotech crops in Europe. Countries should now ban all GM maize crops and follow the wishes of the majority of their citizens to move farming in a greener direction”.

Governments have the right to ban groups of GM crops – defined by crop or by characteristics, for example all GM maize plants or all herbicide-tolerant GM crops. Nonetheless, it is uncertain whether countries would be able to ban crops due to negative environmental impacts at the regional level. Existing EU policy only assesses potential environmental harm at the level of the EU bloc. The final wording says “distinct and complementary to EFSA risk assessment”. 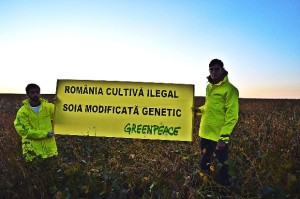 On a national level, Romania has the longest history in Europe, regarding cultivation of GMOs, the first authorized GM commercial crop, a Round-Up resistant soy developed by Monsanto already being cultivated in 1998. Also, Romania’s governmental support for GMOs is well known as not one, but two ex ministers of Agriculture, Valeriu Tabara and Stelian Fuia had contractual relations with Monsanto.

The latest scandal from 2014, when Greenpeace uncovered the existence of genetically modified (GM) soy crops, illegally cultivated in Romania doesn’t help much either. It just shows the extent to which the Government lost trace in the monitoring of GM crop cultivation exposing its population to unnecessary health risks.

The Romanian Minister for Agriculture and Rural Development, Daniel Constantin, considers that it is still premature to decide on GM crops, arguing that the implementation of the new European Directive into the national legislation exceeds the seeding period of the GM corn, the only crop currently authorized on an EU level for cultivation. In other words, the Ministry found a convenient way to postpone Romania’s decision to ban the cultivation of GM crops, even if the new EU regulation would permit it.

Farming organizations like LAPAR which supports GM cultivation has another viewpoint. Their president, Laurentiu Baciu a strong supporter of the banned GM soy, has decided to aggressively lobby the Government so that Romania becomes a country which approves GM crops. “Three weeks ago I had a discussion with Minister Daniel Constantin. He told me, that in principle, he agrees with the cultivation of GM crops. But he is afraid of the environmentalists…”, pointed out Baciu.

It seems that the rhetoric of the Ministry differs depending on the crowd. In another press conference the same Minister argued that the decision regarding the ban of GM crops lies in the hands of future decision makers. Asked specifically about the future cultivation of GM soy in Romania, Mr. Constantin responded that “this will only happen if [GM] producing companies will accredit at EFSA such a crop…and as the process takes up to four years, the response of the Romanian Government will come even later. At this time, the production of non-GM soy is stimulated by coupled payments. Thus, non-GM soy producers can receive an extra 325 euro in the first year for their production”.

Ultimately, when it comes to the cultivation of the currently approved GM corn, farmers are not pleased by the offer. In 2014, only 770 hectares were cultivated with the MON810 corn, and since its approval, its cultivation acreage fell every year. Still, Romania hosts GM soy fanatics by EU standards: ex-ministers with links to the biotech industry, current ministers which can’t seem to say no to agroindustrial claims and bi-ag farmers groups which raised their battle flags to re-establish an old trend, a monoculture of GM soy in Romania.

Eco Ruralis take the global local in Romania for peasants and against TTIP. With Laetitia Nourry […]