Yesterday (January 21st) EU Trade Commissioner Karl de Gucht announced a public consultation on the so-called investor-state dispute settlement (ISDS) part of the planned EU – US Free Trade agreement – Transatlantic Trade and Investment Partnership (TTIP). During the three-month consultation, some parts of the treaty negotiations will be put on hold. “I know some people in Europe have genuine concerns about this part of the EU-US deal,” said de Gucht. 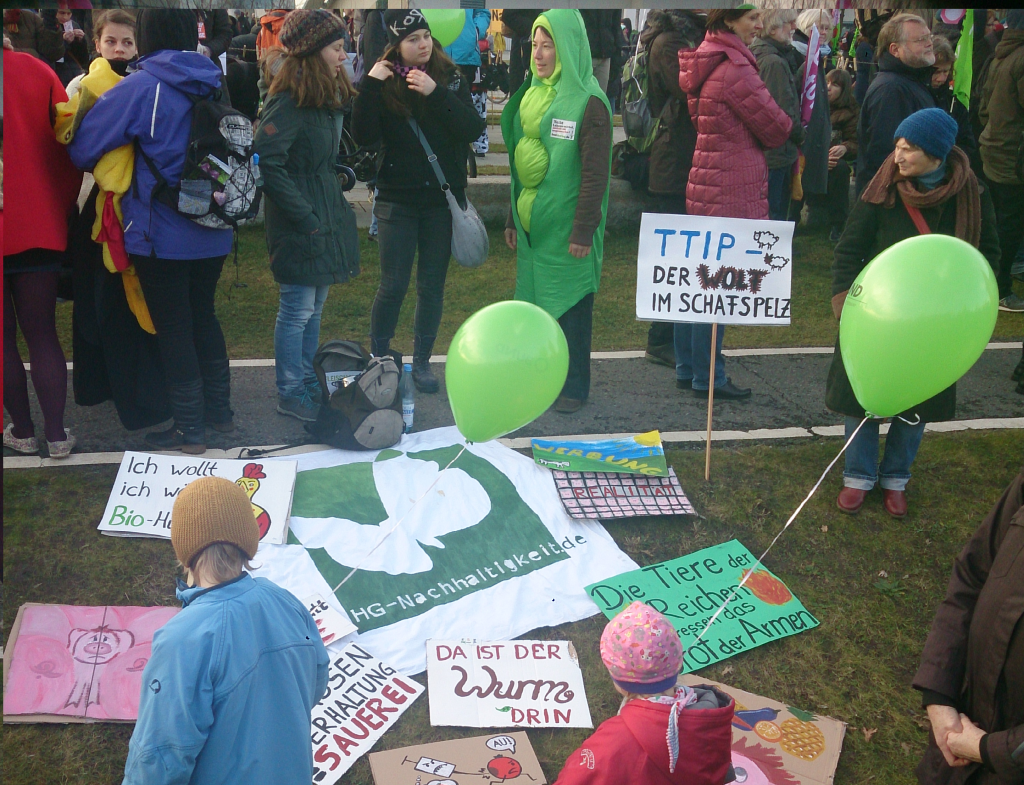 Photo by Oliver Moore from Jan. 18th We Are Fed Up! demonstratio

According to the official EC press release : “The decision follows unprecedented public interest in the talks (…) In early March, (De Gucht) will publish a proposed EU text for the investment part of the talks which will include sections on investment protection and on investor-to-state dispute settlement, or ISDS. This draft text will be accompanied by clear explanations for the non-expert. People across the EU will then have three months to comment (…) No other part of the negotiations is affected by this public consultation and the TTIP negotiations will continue as planned.”

The ISDS provisions would allow corportations to sue governments for loss of revenue when they infringe on their right to do business and are seen to affect expected profits.  Companies can by-pass national/European court systems and go directly to international, investor-biased tribunals.  For example, if a government bans genetically modified foods, a company could sue for loss of profits.

Civil society groups including ARC2020 have voiced their concerns over ISDS and other aspects of the TTIP over the past few months.  As highlighted by the Institute for Agriculture and Trade Policy (IATP), so far, negotiations on the trade agreement have been shrouded in secrecy.  For now, the announcement can be seen as an initial victory that “shows what public pressure can do, especially after de Gucht breezily denied that there was anything to worry about,” said English journalist George Monbiot.

Commenting on the announcement, Paul de Clerck from ARC2020 member Friends of the Earth Europe said: “This is a step in the right direction, and signals growing opposition to the investor-to-state dispute settlement mechanism. The excessive rights granted by this mechanism, which would allow companies to sue governments if they see their profits affected by democratically agreed decisions, are both undemocratic and unnecessary.”

“Opposition is growing amongst the public, Members of the European Parliament and national governments. This mechanism undermines governments’ sovereign rights to regulate in the public interest. We call on the public to demand a clear ‘no’ to excessive rights for businesses”.

“If the Commission is serious about genuinely consulting the public, on these so far secretive talks, then business should play no part. It must not use business statements in favour of investor protection as an excuse to put corporate interests before public interests”.

The next round of negotiations are scheduled for early February, when tariff barriers will be discussed, and then a meeting at the end of February will take stock of previous rounds. The talks are expected to be suspended between mid-April and autumn 2014 because of the renewal of the European institutions.

Irish Upper House Rejects CETA – what does this mean?

Barry Finnegan of ATTAC Ireland explains how Ireland’s upper house voted – by a single ballot – against CETA last week. He also points to the wider implications of this (albeit) non-binding vote – the first of its kind in an EU member state parliament. […]

Consumer, farm and food groups on both sides of the atlantic are concerned about how TTIP will impact on GM Food standards and rules. […]

BREAKING (12/06/2015, 20.30 hrs): House Rejects Trade Bill, Rebuffing Obama’s Dramatic Appeal First comment from IATP: Following months of intense public opposition to Fast Track, the House of Representatives today defied the Obama administration’s trade promotion package. The debate over Fast Track blurred party lines. “It took real courage for those Democrats and Republicans who stood up to the President and Republican leadership and opposed the free trade package. They defended working families, farmers, natural resources, the environment and most importantly, democratic principles,” says Juliette Majot, President of the Institute for Agriculture and Trade Policy (IATP). “This is a clear rejection of the free trade agenda that favors big business over workers, farmers, consumers, and our environment. It’s time to bury this failed approach. I just hope the administration is really listening to what was said today, and what citizens groups around the world have been saying for years. We need very different rules that enhance local economies and jobs and advance efforts to rebuild our food system so it is fair and sustainable,” according […]